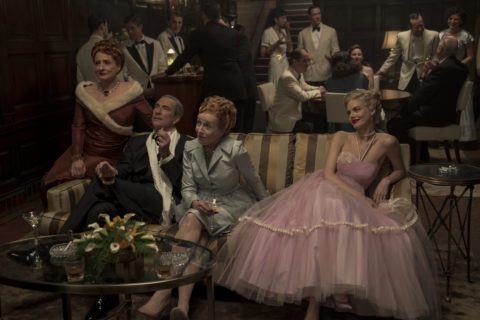 We’ve got a lot of time on our hands right now. Here are all the movies and television shows we can’t wait to stream in May 2020.

Hollywood
This limited series from Ryan Murphy and Ian Brennan follows a group of aspiring actors and filmmakers as they try to make it in post-World War II Hollywood, no matter the cost. Each character offers a peek behind the gilded curtain, spotlighting the unfair systems and racial, gender and sexuality biases of the film industry. The series stars Darren Criss, Laura Harrier, Dylan McDermott, Holland Taylor, Patti LuPone, Jim Parsons, Jeremy Pope and David Corenswet. Available May 1

Becoming
This documentary offers a rare and up-close look at Michelle Obama’s life, taking viewers behind the scenes of her 34-city book tour for her bestselling 2018 memoir Becoming. “Those months I spent traveling — meeting and connecting with people in cities across the globe — drove home the idea that what we share in common is deep and real and can’t be messed with,” said Obama in a statement. “I treasure the memories and that sense of connection now more than ever, as we struggle together to weather this pandemic, as we care for our loved ones, tend to our communities, and try to keep up with work and school while coping with huge amounts of loss, confusion, and uncertainty.” Available May 6

Dead to Me: Season 2
Season 1 of this dramedy starring Christina Applegate and Linda Cardellini closed with a dramatic cliffhanger, and the new season picks up in the aftermath of those shocking moments. The show’s leads start to unravel with the stress of having to keep their deadly secret, which becomes increasingly difficult with a detective hot on their heels. Available May 8

Unbreakable Kimmy Schmidt: Kimmy vs. the Reverend
Unbreakable Kimmy Schmidt, which ran for four seasons on Netflix and ended in January 2019, is back for a special interactive episode. Kimmy’s getting married but she has to figure out how to foil the Reverend’s evil plot before her wedding, with viewers getting to determine the outcome in this choose-your-own-adventure episode. Series stars Ellie Kemper, Tituss Burgess, Jane Krakow­ski, Carol Kane, and Jon Hamm reprise their roles, in addition to a guest appearance by Daniel Radcliffe. Available May 12

The Lovebirds
Kumail Nanjiani and Issa Rae play a couple that accidentally gets caught up in a murder. In an effort to clear their names, they take off on a wild quest to find the killer before the police tracks them down. Over the course of one disastrous night, the pair end up in one bizarre, hilarious situation after another. Available May 22

Space Force
From the creators of The Office, this comedy series follows Steve Carell, who plays a four-star general in the US military, as he begrudgingly teams up with an eccentric scientist to get the armed forces’ new division, Space Force, off the ground. The goal of the new branch is to “defend satellites from attack” and “perform other space-related tasks.” The series also stars John Malkovich, Lisa Kudrow, Jimmy O Yang, Noah Emmerich and Fred Willard. Available May 29

Betty
This new HBO series is a spin-off of Skate Kitchen, a 2018 film about a group of female skateboarders in New York City. The story is inspired by a real-life group of teenage skaters, some of whom starred in both the film and the upcoming series. Focusing on the group’s efforts to stand out in New York’s predominantly male world of skateboarding, the series stars Dede Lovelace, Kabrina “Moonbear” Adams, Nina Moran, Ajani Russell and Rachelle Vinberg. Available May 1

Parasite
This South Korean film swept up at the Oscars earlier this year, taking home four Academy Awards, including one for Best Picture, a first for a non-English language film. The masterpiece by director Bong Joon Ho is a tale of class discrimination and disparity, told through the experience of a poor family that cons its way into the home of a wealthy family. Available May 29

Ramy: Season 2
Created by and starring comedian Ramy Youssef, who won a Golden Globe for his performance earlier this year, the show about an Egyptian-American family in New Jersey returns for its second season. The series follows Ramy Hassan, played by Youssef, as he “delves further into his spiritual journey, finding a new Muslim community and embracing deeper commitment to his faith.” Two-time Oscar winner Mahershala Ali also joins the cast this season, playing Sheikh Ali, a mentor to Ramy. Available May 29

Hustlers
“The game is rigged and it does not reward people who play by the rules,” says Jennifer Lopez’s character Ramona in this film about a group of strippers in New York who con wealthy stock traders and finance CEOs out of thousands of dollars. Based on a true story, Hustlers is adapted from a New York magazine article from 2015. In addition to Lopez, the film stars Constance Wu, Lili Reinhart, Keke Palmer and Julia Stiles, as well as Cardi B and Lizzo in cameo roles. Available May 1

The Great
This satirical drama follows the rise of Catherine the Great from outsider to the longest reigning female ruler in Russia’s history. Elle Fanning plays the lead role, with Nicholas Hoult, Phoebe Fox, Gwilym Lee and Sebastian de Souza as co-stars. “Sort of” based on historical facts, according to the trailer, the series is written by Tony McNamara, who was nominated for a screenwriting Oscar for The Favourite at the 2019 Academy Awards. Available May 16

Homecoming: Season 2
The first season of this critically-acclaimed psychological thriller was adapted from a hit podcast, and featured Stephan James, Julia Roberts, Hong Chau and Bobby Canavale. The show returns for its second season with a new mystery revolving around veterans at the secretive Homecoming facility, and features James and Chau from the first season along with new stars Janelle Monáe, Joan Cusack and Chris Cooper. Available May 22