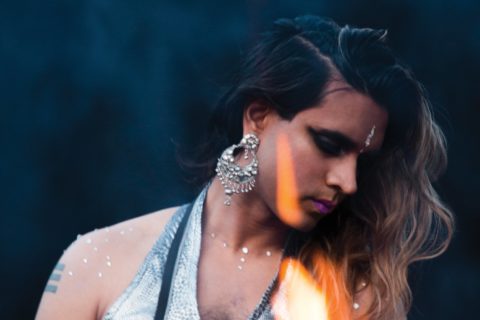 It would be easy to assume that Vivek Shraya doesn’t feel altogether at home in a traditionally conservative place like Calgary. She isn’t the only trans woman in this city of over a million, but since she lived in Toronto for more than a decade, the general lack of divers­ity in Alberta could be jarring. “I think Toronto isn’t as progressive as it thinks it is,” she says. “Something that I enjoy about Calgary is…yeah, it can be conservative in some ways, but you actually know where you stand with people, whereas Toronto is seemingly very diverse; it’s seemingly very open, but there’s a lot of stuff that happens beneath the surface.” Shraya teaches creative writing at the University of Calgary, and, like any good instructor, she abhors ambiguity. Well, sometimes.

Shraya has an interesting relationship with specificity. On the one hand, as a multidisciplinary artist who is trans, she challenges society’s default gender binary through her music (she is in a band with her brother called Too Attached), her writing (I’m Afraid of Men, her upcoming book, will be released later this month) and her very being. If she argues for a less specific, less rigid definition of gender, it’s done for clarity. She is less interested in how people—men, in particular—present than she is about how people are. In I’m Afraid of Men, she makes a case for abandoning the vague notion of “a good man” because “good” is so broad that it’s nearly meaningless. After we have specified what it means to be good, she argues, we’re in a better place to broaden what it means to be a man.

Why do you think that straight men especially, but women as well, have such a fear of gender nonconformity?

I think that men encounter particular pressure in ways that we don’t always talk about. In North America, any time a boy shows interest in so-called feminine ideas or behaviours, there’s an immediate move to correct. It’s funny because gayness is about sexuality, but for me, what people were really commenting on was my gender—the fact that I wasn’t acting the way a boy was supposed to act. When someone doesn’t identify with the gender they were assigned at birth, that threatens, in a lot of ways, what masculinity is founded upon, which is a boy acting like a specific version of what a boy is supposed to be.

It’s almost like there’s a hierarchy of allowable orientations or identities where straight men are like “Other straight dudes? Fine. Lesbians? They’re next. They’re OK because we like seeing two women together. Gay men? OK, kind of.” Then anything after that, they get nothing from them so they reject them.

Truthfully, I think a lot of it is rooted in a history of hatred toward women. I know that that sounds very dramatic, but I really think that in the hierarchy you listed, straight men are osten­sibly, to make a generalization, ‘masculine.’ Lesbians are sometimes perceived as masculine. Gay men still have a little bit of masculinity. It’s almost like the real spectrum you’re talking about is the erosion of masculinity. The more that masculinity is sort of lost, the more the individual is condemned.

Reading your book as a straight white dude, I found my­self not feeling attacked per se but vaguely defensive.

Well, that’s what I’ve been trying to figure out. I want very much to be an ally, yet I still have this reaction that asks “Isn’t this just true for everyone and not a gender thing?” For example, one of the things you mention in the book is this idea of taking up space. When straight men take up space, and just shoot their masculinity everywhere, I don’t interpret that as misogyny; I just interpret that as assholery. Or, in order to get people to understand transness, you say you have to share stories of tragedy that make people empathize. That also seems like something that is true for humanity—that other people generally don’t care about others until they’re shocked into it by emotion.

I really like specificity, and so the book is largely about gender. But I certainly think that the same rule can apply to race as well. I think that when people hear violent stories about what has happened to young black boys by police and under police brutality, there’s a response that happens. And, yeah, I think it’s a human response, but how come we don’t care about the relationship between young black boys and police before violence happens? I think you’re right in that, yes, it applies across the spectrum, but I think it applies specifically to people who are oppressed. I think we tend to only care about the oppression of people when stories of trauma or brutality or violence are exposed as opposed to when people who are oppressed just want to have a conversation about their oppression.

Speaking of men, I liked the idea you put forward about how we have to get rid of the notion of the good man.

I see, especially during this #MeToo moment, where any time it’s revealed that a man might have sexually harassed or assaulted someone, the first response is always ‘I thought he was one of the good ones. Not him, too!’ It’s funny how ‘#MeToo’ is really linked in some ways to ‘Not him, too.’ And that’s a big part of the problem, whether we realize it or not. The bar we set for men is really high because we assume that a lot of men are good, and then when a man fucks up, there’s this weird mourning of his goodness. To me, the values of good and bad seem kind of useless. They feel very moral and religious, so I think that assuming that men are good or hoping that men are good actually doesn’t do or say much. What if we were to ask men to ascribe to different values? Be a communicative man, or reliable.

If we were more specific, we might actually be able to create a new kind of masculinity. Why do we see this person as good? Is it because he holds the door open for women? Is it because he’s soft-spoken? Is it because he’s stylish? Is it because he’s close to his mom? All of those things don’t necessarily make a man good. If we want to change what masculinity looks like, and what masculinity can be, it must be intrinsically linked to abolishing this whole idea of a good man. It isn’t a useful barometer, because men can do very little, including just washing some dishes, and then suddenly they’re good men. I don’t think it applies on the other end. No one’s ever like ‘Oh, I thought she was one of the good ones.’ It’s always just like ‘That fucking bitch!’

You can find Vivek Shraya in our September 2018 Identity Matters Issue, on newsstands August 13.

Photography by Zachary Ayotte
Get the best of FASHION in your inbox Thanks for signing up!
The latest fashion, beauty and celeb news delivered right to your email #FASHIONforall Now, check your inbox to complete your subscription
We won’t ever use your email address for anything else
Want even more FASHION? Follow us on social media.