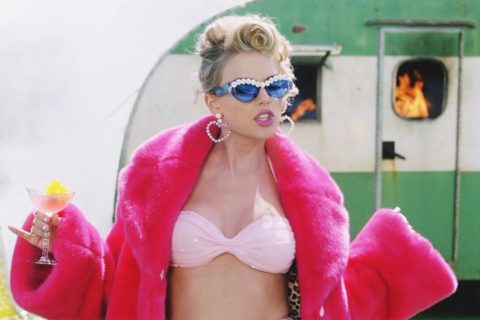 What is the web-o-sphere angry about this week? A former Disney star who shared explicit photos on Twitter, a blogger whose secret proposal was more #spon than spontaneous and a pop star who insists “shade never made anybody less gay.” Here’s everything you need to know:

THE STORY: Last weekend, 21-year-old former Disney star Bella Thorne shared a series of explicit images of herself on Twitter, explaining that “for the last 24 hours I have been threatened with my own nudes.” Thorne opted to post the photos herself, because “it’s MY DECISION NOW U DON’T GET TO TAKE YET ANOTHER THING FROM ME. I can sleep tonight better knowing I took my power back.”

On Monday morning’s episode of The View, Whoopi Goldberg expressed her frustration with the story. “If you’re famous, I don’t care how old you are. You don’t take nude pictures of yourself,” she asserted. “Once you take that picture it goes into the cloud and it’s available to any hacker who wants it, and if you don’t know that in 2019 that this is an issue, I’m sorry. You don’t get to do that.”

Do you know I used to respect #whoopiegoldberg but after what she said about @bellathorne, I can’t stand her! She’s supposed to uplift and support her gender! God forbid anyone leaks private photos of you whoopie! You’ll get no sympathy here! #WhoopiGoldbergCanceled

I’m so frustrated and upset over @bellathorne ‘s situation. The fact that whoopi thought it was OKAY to BLAME BELLA for someone STEALING and HACKING her intimate photos is ATROCIOUS. How about teaching EVERYONE how to RESPECT others’ privacy and acknowledging the fact that

RIGHTEOUSNESS OF THE RAGE: Thorne isn’t the first female celebrity to have her intimate images hacked, and Goldberg won’t be the last female celebrity to shame other women for taking nude photos. This is a complicated conversation about the consequences of fame, the violation of women’s bodies and the death of privacy in the age of the internet.

THE STORY: Marissa Fuchs is a fashion and lifestyle influencer with nearly 200k followers on Instagram, where she goes by @fashionambitionist. She’s also the Director of Brand Partnerships & Sales at Gwenyth Paltrow’s company, Goop.

Earlier this week, she shared a series of Instagram stories from the Goop office, where her boyfriend, Gabriel Grossman, surprised her with a proposal-esque video.  “I have the most important question of my life to ask you,” he says in the pre-filmed clip, where he notes that traditional wedding’s “weren’t really their style” and that he wanted to create an experience that she could “capture for the ‘gram.”

The authenticity of the grand gesture—which was filled with OTT surprises and took Fuchs to multiple locations over four days—was questioned by The Atlantic journalist, Taylor Lorenz, who tweeted a thread revealing that the “surprise wedding” was pitched to brands before it even began.

“I got the deck yesterday. Here’s the full rundown,” she begins, before posting images of the pitch that was sent to brands.

“This summer, Marissa of @FashionAmbitionist will be pulled into a surprise adventure created by the center of her life, Gabriel,” one of the marketing slides reads. “He will remotely ask her to take an unexpected and sentimental journey to him, a journey that will encompass many familiar stops along the way that offer their own unique gifts.”

“We’re pleased to offer your brand the opportunity to align with this momentous occasion and the beautiful cities she will be visiting along the way.”

God this would make you vomit – influencer 'marketing' at its worst and there are a lot of bad examples to compete with. https://t.co/7cO7DHfrhZ

I got the influencer engagement proposal sponsorship deck and all I can say is that every day we stray further and further from God’s light.

RIGHTEOUSNESS OF THE RAGE: In the time the story was going viral, Grossman insisted that Fuchs wasn’t involved in pitching the proposal to brands and said that the couple received no direct payment for the Instagram stories posted throughout the surprise.

Advertising exec Bryan Pedersen, however, told The Atlantic: “Either her fiancé has been intimately involved in every single aspect of her business and influencer marketing career and knows every detail of her influencer partnerships, or she has had some input into that pitch deck. There’s no way a friend or potential fiancé would know how to put together a pitch deck with that detail.”

I’m not quite sure I buy into that. Fuchs’ close friend, Elicia Blaine Evans—who at one point took control of Fuchs’s phone and posted an Instagram story to deny rumours that the surprise was a setup—was formerly on the social media teams at Michael Kors and Audi. She played a major role in plotting the proposal, and she likely knows how to put together a savvy social media marketing deck.

Plus, having watched each of the 100+ Instagram stories posted to Fuchs’ account, I truly doubt she knew what was going on. You don’t sign yourself up to cry like that on camera. She’s either entirely shocked, or the next Meryl Streep.

Which makes this entire story even stranger: Grossman was shopping his future fiance around to brands, promising hashtags and mentions on her Instagram stories. How romantic!

Taylor Swift Releases “You Need to Calm Down”

THE STORY: In the middle of Pride Month, Taylor Swift released “You Need to Calm Down,” a self-professed LGBTQ anthem. The song takes on homophobia with lyrics like: “Sunshine on the street at the parade / But you would rather be in the dark ages;” “Shade never made anybody less gay;” and “Why are you mad? When you could be GLAAD?”

The video includes a jam-packed cast of queer celebrities, including Ellen DeGeneres, Laverne Cox, Jesse Tyler Ferguson and all five Queer Eye guys. It closes with a call to sign a petition in favour of the Equality Act, which would ban discrimination based on sexual orientation and identity.

Lest we forget when Taylor Swift gladly sang “tell your friends I’m crazy, I’ll tell mine that you’re gay” about an ex-lover who broke up with her as she drops this absolute pander of a single today.

Taylor Swift profited off of conservative dollars when she was America’s conservative sweetheart, and said nothing, and now wants to act as if she’s been some outspoken LGBTQ activist and profit off of queerbaiting. Please tell me y’all don’t buy it ?

all anyone is saying is that taylor swifts new single is a PRIME example of queerbaiting. she used pride month to her advantage to get people to think she made a “gay anthem” to make her more money while also contributing nothing to the lgbt community.

RIGHTEOUSNESS OF THE RAGE: Swift is one of the biggest pop stars on the planet, she doesn’t need money. She is, however, somewhat desperate to win back public support. Throughout the 2016 election, Swift was heavily criticized for remaining silent on the topic of politics. In an essay for Elle Magazine earlier this year, she vowed to be more politically active and speak out against “disgusting rhetoric.” This song seems to be a part of that promise.

Though it’s entirely fair to call out Swift’s actions for being too little, too late. “Eight years after Lady Gaga’s ‘Born This Way,’ which came from an artist who was out as a bisexual woman at a time when the gay rights movement had far less mainstream traction than it does now,” Christina Cauterucci writes for Slate, ““You Need to Calm Down” looks even more pathetic.”