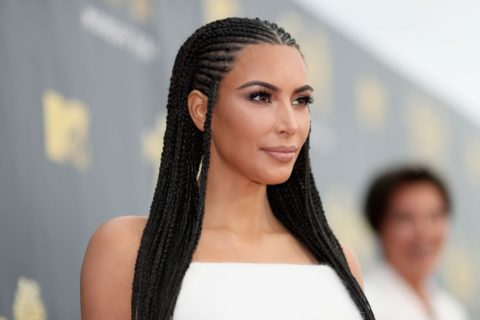 What is the web-o-sphere angry about this week? Kardashian kultural appropriation, a bizarrely cruel Zara jacket and Shakira’s tour merch. Here’s everything you need to know.

THE STORY: Earlier this year, Kim Kardashian faced scrutiny for sporting her hair in blonde, beaded Fulani braids. The problem wasn’t just that she sported a traditionally African hairstyle, it was that she captioned her photo “Bo derek braids,” seemingly crediting the style to a white woman .

Arriving at the Saturday night’s MTV Movie and TV Awards, Kardashian walked the red carpet with her mom Kris Jenner, her hair in braids once again.

I can’t deal with Kim Kardashian and those fucking braids. I’m convinced she wears the braids out of spite and to piss off black women

Kim Kardashian in these braids is exhausting. The most annoying part is that at this point she knows what she’s doing, she knows what cultural appropriation is and that it upsets people yet she still chooses to do it because she knows it doesn’t upset the right ppl or cost her $$

RIGHTEOUSNESS OF THE RAGE: For the first time, Kardashian has addressed the controversy her hairstyle has stirred. In a new interview with Bustle, Kardashian West doesn’t quite apologize to the community she’s offended, but instead offers an explanation as to why she keeps wearing braids.

“I actually didn’t see backlash. I actually did that look because North said she wanted braids and asked if I would do them with her. So we braided her hair and then we braided my hair,” she explained.

Despite this explanation, she understands her critics. “I [do] remember the backlash when I had the blonde hair and that I called them ‘Bo Derek braids.’ But I obviously know they’re called Fulani braids and I know the origin of where they came from and I’m totally respectful of that. I’m not tone deaf to where I don’t get it. I do get it,” she said. Kardashian went on to say that she wears the style in honour and with respect of the culture where it originated. To which I say: you do you Kim.

THE STORY: Boarding a plane to Texas to visit detention centres where young migrant children have been separated from their families, First Lady Melania Trump wore a a $39.00 Zara army jacket with the words “I REALLY DON’T CARE, DO U?” scrawled on the back.

Melanie trump wore a jacket to the boarder today that on the back said “I really don’t care do u?” For fucks sake! She is a model! She knows the power of clothes! Why lady? Why?

People in politics, including their families, know that even the most subtle action or statement, even what is worn, sends a message. Melania has a staff to advise her on her actions and statements. Her jacket wasn't just fashion. It was a statement. #KeepFamiliesTogether #resist

Instead of explaining her fashion choice, Melania’s spokeswoman, Stephanie Grisham, offered this dismissive statement: “It’s a jacket. There was no hidden message. After today’s important visit to Texas, I hope the media isn’t going to choose to focus on her wardrobe,” she said. To which, I say:

Everyone saying not to be distracted by the jacket seriously underestimates my ability to be pissed about multiple things simultaneously. – J

Melania Trump—once portrayed as a victim of the Trump administration—will not come back from this. The contempt she has shown as a representative of the United States is unforgivable. Who the contempt was directed to remains unclear.

THE STORY: A pendant being sold as part of Shakira’s “El Dorado” tour merch has drawn comparisons to the Black Sun, a symbol used by the Nazis.

Dear @shakira, you know that your necklace depicts an important Nazi symbol, propagated by the SS during the Nazi era? It was so popular that Himmler incorporated it into a floor of the Wewelsburg Castle to establish it as the "center of the New World ". https://t.co/00Bfy1Tywm pic.twitter.com/2m0hldq0w9

i am sorry to tell you, but lack of knowledge does not justify anything anywhere ever. Not if you drive to fast, if you commit a crime or use well known nazi symbols.

Well, this is certainly problematic. For more information on the Sonnenrad, see our hate symbols database at https://t.co/9PpjjWdvFh.

RIGHTEOUSNESS OF THE RAGE: This item has since been removed from Shakira’s website—though it probably didn’t have to be. Shakira is from Colombia, and her tour is named after a mythical gold-obsessed legend that originated in her country. Most likely, this pendant was inspired by patterns popular in pre-Colombian artifacts. Not by Nazi imagery.

These Twitter users know European history to the finest detail, but might want to spend some time brushing up on their South American history. They can start by watching this cartoon film, which, coincidently (or not), features a very similar symbol.

Photography via Christopher Polk/Getty Images
Get the best of FASHION in your inbox Thanks for signing up!
The latest fashion, beauty and celeb news delivered right to your email #FASHIONforall Now, check your inbox to complete your subscription
We won’t ever use your email address for anything else
Want even more FASHION? Follow us on social media.