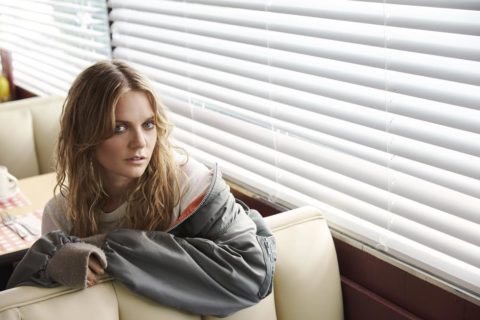 Tove Lo Opens Up on Being Controversial and Crushing Clichés

Wearing a sheer black Maison Margiela top, vintage Levis and two arm tattoos cloned from her favourite Mark Ryden paintings, Tove Lo is a force to behold. In person, the Swedish hitmaker redefines the word swagger with the way she presents and articulates herself. The six silver rings she is sporting (including one from her grandmother, one made by her best friend and one made by her brother) look like glamorous wrestling gloves. Which makes sense, since Tove Lo’s songs—from “Talking Body” to “Habits (Stay High)”—pack such a punch by way of their nonconformist hooks and lyrics. Her specialty—especially in her latest disc, Cool Girl—is unveiling truths about love and lust in today’s Tinder-driven romantic landscape. What is most interesting is the way Lo pairs choruses with videos and images that seem more suited to art gallery exhibits than YouTube or Vevo. More Sia than TSwift in her musical and visual approach, the 28-year-old talent isn’t afraid to offend anyone, and, in many ways, her rock ‘n’ roll ideals counter so much of what is going on in pop today. Her vision is proving to be just as controversial as her sound. Youtube recently banned her short film called Fairy Dust, which showcases videos from her current album, Lady Wood, simply because it had scenes where Lo was masturbating in the camera (the video has since been reposted). During a quick press trip to Toronto, FASHION caught up with the Swede to talk about how her incisive point of view and forward-thinking ways have informed her work.

Your latest hit, “Cool Girl,” is such an anthem for romantic fluidity. What are the benefits of being so open with love and striving to have no limits in a relationship?
So many to choose from! The song has a lot of layers, in a way. I’m being a little sarcastic in the song. It’s more describing the way we have these power plays in relationships. “I like you, so I’m going to make you feel insecure about how I feel about you.” That’s the reason why you want label anything—if you’re in a serious relationships or having fun. You need to define it. You can’t really trust what the other person is feeling because you don’t know. We don’t really let each other know. It’s almost as if the one who shows the least emotion has the control or power. It’s interesting me. If you’re just both fully honest, you don’t need to define it. If you’re comfortable and free with your emotions and you’re open about it, it’s just a fling…it’s almost like as soon as you define it, it comes with rules—the kind of rules that don’t make sense.

Do you think the rules of dating from five years ago are already old school?
Oh, yeah. I feel like you can be in this grey area or this free moment for a while when you just met and are showing your best side because you like each other. It gets to a state when you say, “What are we?” That’s when the rules change. All of a sudden you have all these expectations. “If we’re a couple, we should be this way.”

Where do you think your independence comes from?
Being a girl or a woman always comes with expectations. For example, if you’re seeing someone, you’re supposed to want it to become serious. Every thing you do is supposed to mean something. You should want to be asked out on dates and be taken care of. I don’t know if the end goal is marriage anymore. In Sweden—compared to a lot of other places—we’re very equal. I’ve never had any thoughts of, “I can’t do this because I’m a girl.” My parents have always been a big part of it. They raised me to be whoever I wanted to be. They didn’t always agree with me, but they loved me no matter what. Being a performer has made me realize that I’ve had to stand up for myself a little more.

How so? What do you think you are most up against?
There have been a lot of situations where people have asked me, “Don’t you feel you should be a better role model for young girls? You sing about drugs and sex. You shouldn’t be doing that.” I say, “Would you ask a guy that?” I’m judged. A lot.

I was listening to Bret Easton Ellis’ recent podcast with Moby. He talked about how if you’re a freak or say anything against the norm, you’re torn down. Did you ever feel a Tove Lo backlash?
I’ve definitely felt it. In the beginning, I’d think, “What are people saying? Are they liking this?” Oh, my god, I saw so much hate. If I start defending myself, that means I’m taking in the judgment, which means I’m wasting my time. I’m not going to change myself. I’m going to keep doing what I do. I’m going to keep being very open. For me, music and sex are very connected and I’m very proud and honest about that. I’m not going to shave off those layers or polish those corners just because it’s pop. There are so many people saying, “Fuck yeah! I’m so excited that you do this!” I engage with those people.

Who’s the last artist you feel has stuck their neck out and said something bold, brazen and important?
Fuck, I don’t know. I’m bad at keeping track of that. The first thing that comes up in my mind is Madonna. I feel like she sexually liberated all of us women. Lately, I don’t know.

One of your new songs, “Heartstrings,” is about the thrill of being hurt from a bad relationship. Do bad lovers make good songs?
Big yes. Maybe not bad lovers but bad loves. Anything that starts very fiery and intense is going to end that way. It’ll end in jealousy. It rarely simmers out. If it’s a storm as you go into it, it’ll be a storm all the way. At least that’s been my experience with the relationships I’ve had. The whole album is about chasing rushes—whether it’s drugs or love or being onstage and getting a rush from that. It’s always about feeling the most alive. Everyone does that, whether it’s shoplifting the smallest item or winking at somebody you think is hot on the street. It’s scary, but it’s also really exciting. It’s me analyzing myself in 10 songs.

Your mother is a psychologist. Does that feed into your work?
I remember being a teenager and she would say, “When you say that, how does that make you feel?” It would drive me crazy! It probably helped me to be able to define and talk about my emotions. I know my issues and my flaws, but I don’t do anything about it. I can define the problem because of her. Defining it is half the job! Because there wasn’t a stigma in my family. I went to a lot of psychologists as a kid. I got really good at talking about it and expressing all that.

There was an interview you did where you talked about money hooks. You said there are money hooks and real music. What are money hooks to you?
What I meant was the hooks that’ll get stuck in your head without you wanting it to get stuck in your head. It’s hard to know what they are. You might find them annoying at first, but you end up liking it. For me, it’s so much about the lyrics. I can’t listen to a song with a great melody but bad lyrics. I’d rather have someone say, “I fucking hate your song” than have someone say, “It’s a nice song.” I want to stir emotions up.

You’ve worked with some amazing people like Flume and Nick Jonas. Tell me about the difference in approaches between the two.
Every song I’ve featured on besides Coldplay, I’ve been a part of writing. With Flume, I wrote melodies and the topline. He produces and writes himself. He’s this musical genius. I’ve been a fan of his for a long time. When he reached out to me, I ran over there. That song felt very personal to me. I wrote the lyrics and recorded them on the road. It was a very organic, easy thing. Nick is an artist and a performer who’s been famous his whole life. I assumed that it was going to be more of an operation. He was like, “I have this song and I want you to sing on it with me.” I said, “If it’s already done, I’d rather write it myself.” He said, “You can change the lyrics. Just listen to it.” I heard “Close” and wanted to just change the lyrics on my verse. It was fun to perform with someone. I always have my band onstage, but to sing with someone…I’ve never done that before.

One of your older songs “Moments” is so incredible. I like it because it’s different than a lot of stuff we get in pop—especially with female-oriented pop. Then here you come talking about insecurity and anxiety. Do you look at some pop and cringe when it is just about selling the idea of feminism as being a superwoman? Or do you think your reality is something more complex?
I love that you said that. We’re in this post-empowerment place in culture. Women are as capable as men. You can definitely say that. I’m a feminist. It’s very easy—it should be what everyone says. It’s about equality. When you paint a picture of a strong, independent woman as this perfect, powerful, unattainable being…I’m not that. It makes people feel like they aren’t enough as they are. That’s the whole thing: You are. Definitely. Everyone’s not perfect. I just find it too tiring to keep up a perfect exterior all the time. I’m a very emotional person. I fly through 50 emotions in a day. If I tried to keep up being this perfect human, I’d go mad. My music and writing is my outlet for everything I’m feeling. It might be a lot darker than what you see when you meet me. They’re all of my emotions and I’m not scared to share the darker side of things. Everyone feels that and has that inside of them, but for some reason, we’ve just decided it’s not OK to show that.