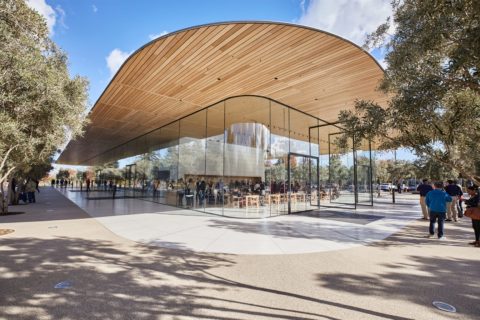 The “Today at Apple” program holds over 18,000 free training sessions globally each week in its 506 stores. “If the store is the hardware, this program, which was expanded this year, is the ‘software’ that’s meant to enrich your life,” says Angela Ahrendts, the senior vice president of retail.

I’ve had the GarageBand app on my phone for years and never opened it. I haven’t painted since I was 10, and while I can do a video edit on the fly in iMovie, I wouldn’t describe my “films” as magical. Yet last Thursday I created a drum solo, an abstract painting and a Zach King-inspired video thanks to the latest Today at Apple software update. It was a blast—and the setting, well, it was exceptional.

I was asked, along with other international journalists, to go to Apple Park in Cupertino, Calif., to learn about the 58 new training sessions being added to the Today at Apple program. The sessions are free, hands-on classes that anyone can take any day they want at any of the 506 Apple stores around the world. (You don’t have to buy or own an Apple product; as they’ll lend you an iPad or an iPhone so you can participate.) Since launching the program in 2017, Apple has been offering an average of 18,000 classes a week, and millions have attended them.

The program is the brainchild of Angela Ahrendts, Apple’s vice president of retail. For a woman who famously told Apple CEO Tim Cook that she wasn’t a techie and therefore not the best candidate for the job, Ahrendts has taken Apple’s biggest product—its stores—and transformed them into imagination hubs with a purpose that goes beyond business. The former CEO of Burberry was hired as the senior vice president of retail in 2014 and immediately set about redesigning the stores so they could become meeting places or “town squares.”

“We have the technology and we’re unlocking the liberal arts and, yes, I hope we impact humanity and we make people’s hearts sing.”

While Today at Apple has likely generated a healthy return on investment, Ahrendts says that she’s more focused on the human ROI—which, for her, means that the program is unlocking people’s creativity, creating connections and building a community.

Ahrendts described the new sessions as the “largest retail software release since Today at Apple was launched.” We met with her and Karl Heiselman, senior director, in the “spaceship” building at Apple Park. (Landing an invite to this normally off-limits part of the campus is like being granted an audience with the pope in the Vatican.)

Being inside this four-storey, 260,000-square-metre circle feels imposing yet strangely serene. We weren’t permitted to take photos, but, trust me, this is a building that would spark Marie Kondo joy in the heart of any minimalist with its glass, steel, white concrete and maple finishes and hallways decorated with exactingly positioned Eero Saarinen Womb chairs. #chairgoals

“[It’s the] largest retail software release since Today at Apple was launched.”

We met with Ahrendts and Heiselman in an inner pod that faces the treed 12-hectare park with its rolling berms and trails. Within moments of meeting her, I saw the same authentic, open-hearted mien she’d exuded in her popular “The Power of Human Energy” TED Talk.

After welcoming us, she launched into a description of the new sessions, noting they’ve been grouped into three categories: Skills, Walks and Labs. Within each category, the classes are focused around six passions: Photography, Video, Music, Coding & Apps, Art & Design and Health & Fitness.

In the Walks sessions, you can join a creative pro (Apple staff members who have been hired to teach the sessions) and tour the area near the store gathering content (videos, photos) that you later use in the store when you’re working with apps like Procreate or Clips. The existing photo walks have always been popular, but now there are walks dedicated to video, music, sketching and health and fitness.

The Labs sessions are the most advanced, explained Heiselman. “It’s where you go deeper. Most of them are 90 minutes, and many of them are with external talent, like the video lab co-created with Zach King.”

Ahrendts said the Today at Apple program honours Steve Jobs’ directive that the company’s job is to enrich lives rather than just sell products. “He said that technology alone is not enough,” she said. “When it’s married with the liberal arts, technology impacts humanity and makes our hearts sing. He was so ahead of his time. We have the technology and we’re unlocking the liberal arts and, yes, I hope we impact humanity and we make people’s hearts sing.”

I can’t say that my heart was singing—more like beating to a rather eclectic drum solo—after I took the Drum Patterns with GarageBand Music Skills session in the Apple Park Visitor Center, which is across the street from the main campus and open to the public. (For more advanced musicians—a.k.a. not me—they will be offering a new lab entitled Beat Making, which was co-created with Swizz Beatz.)

After listening to the drum beats our group created, we went on the Discovering Color Art Walk: Our creative pro told us to take photos of any colours that caught our eye. Later, we used the Procreate app to build our own palette from the hues we had photographed and the Apple pencil to create our masterpiece. (I’m sure MOMA will be calling me any day for my abstract bamboo-meets-Zen landscape.)

Our last experience was the Small Screen Magic Video Lab, which was co-created with Zach King. The YouTube videographer is famous for his six-second “magic vines” where he makes objects and people teleport, swap clothing or disappear using jump cuts created with the Clips app. With tips from the Apple creative pro and an #inspo video message from King, we learned the basic technique and were unleashed to create a video in 20 minutes or less.

The Hermès scarf I was wearing had a starring role as it was “magically” transported from me to Benedict Brook, a writer from news.com.au. Behind the camera were Darcy Matheson of the DailyHive Vancouver and Elle McClure, culture editor at @elleaus and @bazaaraustralia. We called it “Commonwealth Gothic.” #epic (See video below.)

Ahrendts had told us earlier that the goal of the Today at Apple program was for people to learn new skills (check), unlock their creativity (check) and make new connections (check). Once these programs are launched, I’ll be signing up for the Staying Motivated Health & Fitness Walk, co-created with Jeanette Jenkins, and the Photo Lab: Crafting Your Shot, co-created with Chase Jarvis. Meanwhile, I have a Neil Peart-worthy drum solo to work on.

To find out what sessions are being offered at your local Apple store starting January 31, go to apple.com/ca/today.