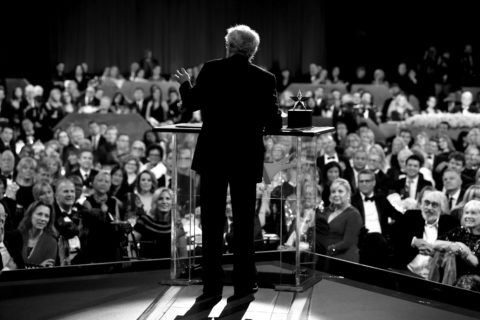 Is Time Up for Woody Allen?

What the post-Harvey Weinstein era has come to mean, in a very short amount of time, is a period in which men are finally being held accountable for their crappy behaviour—from sexual harassment and misconduct to abuse and even rape. But the wave of men being jettisoned from positions of power and privilege is only the beginning. The true force of the #metoo movement lies not in this immediate aftermath (although desperately needed), but in the fact that conversations and dialogues around the world—in offices, in living rooms, in bedrooms—are changing as a result of it. People everywhere, be they celebrities or just normal, everyday folks, are beginning, at last, to introspect, to analyse behaviours and decisions both past and present, to re-evaluate and recalibrate how they interact and empathize with women around them.

The reverberations of this moment in time will be felt for years to come, and in fact, the making of amends has already begun. (Better late than never.) In the past few months, a number of actors and actresses who’ve starred in Woody Allen films over the years have expressed regret about working with him in public statements or interviews. Many of these statements come on the heels of a Los Angeles Times op-ed by Allen’s daughter Dylan Farrow, who has long accused him of molesting her when she was seven years old. In the piece, titled “Why has the #MeToo revolution spared Woody Allen?,” she writes: “We are in the midst of a revolution. From allegations against studio heads and journalists, to hotel maids recounting abuses on the job, women are exposing the truth and men are losing their jobs. But the revolution has been selective.”

That revolution is no longer selective. The reckoning has finally caught up with Allen, with nearly a dozen celebrities disavowing the Oscar-winning writer/director. Below, all the actors and actresses—so far—who’ve seen the light.

Griffin Newman
Last October, in a Twitter thread that made him the very first person to voice his guilt about working with Allen, actor Griffin Newman, who has a role in the upcoming A Rainy Day in New York wrote: “I need to get this off my chest: – I worked on Woody Allen’s next movie. – I believe he is guilty. – I donated my entire salary to RAINN.”

I need to get this off my chest:
– I worked on Woody Allen’s next movie.
– I believe he is guilty.
– I donated my entire salary to RAINN.

Ellen Page
In a November 2017 Facebook post about her terrible experience working with Brett Ratner, Page, who worked with Allen on 2012’s To Rome With Love, wrote: “I did a Woody Allen movie and it is the biggest regret of my career. I am ashamed I did this. I had yet to find my voice and was not who I am now and felt pressured, because “of course you have to say yes to this Woody Allen film.” Ultimately, however, it is my choice what films I decide to do and I made the wrong choice. I made an awful mistake.”

David Krumholtz
Earlier this month, actor David Krumholtz shared with his Twitter followers: “I deeply regret working with Woody Allen on Wonder Wheel. It’s one of my most heartbreaking mistakes. We can no longer let these men represent us in entertainment, politics, or any other realm. They are beneath real men.”

I deeply regret working with Woody Allen on Wonder Wheel. It's one of my most heartbreaking mistakes. We can no longer let these men represent us in entertainment, politics, or any other realm. They are beneath real men.

In an interview with IndieWire the following day, he spoke about “being moved by that [Time’s Up] movement and being a father of a daughter, and feeling like it’s time at the very least, whether or not you believe Woody or you believe Dylan, it’s time for Mr. Allen to stop making inappropriate films about February/December relationships.” He added that he had donated his salary from the film to Time’s Up.

Greta Gerwig
Writer, director and actor Greta Gerwig, who worked with Allen on To Rome With Love, was asked in an interview with the New York Times earlier this month about whether, when it comes to men like Roman Polanski and Woody Allen, we should “care about, reward or punish what artists do beyond the parameters of their art.” Gerwig replied, “I would like to speak specifically to the Woody Allen question, which I have been asked about a couple of times recently, as I worked for him on a film that came out in 2012. It is something that I take very seriously and have been thinking deeply about, and it has taken me time to gather my thoughts and say what I mean to say. I can only speak for myself and what I’ve come to is this: If I had known then what I know now, I would not have acted in the film. I have not worked for him again, and I will not work for him again. Dylan Farrow’s two different pieces made me realize that I increased another woman’s pain, and I was heartbroken by that realization. I grew up on his movies, and they have informed me as an artist, and I cannot change that fact now, but I can make different decisions moving forward.”

Mira Sorvino
In an open letter to Dylan Farrow on HuffingtonPost.com, Mira Sorvino, who worked with Allen in 1995 on Mighty Aphrodite, wrote: “I confess that at the time I worked for Woody Allen I was a naive young actress. I swallowed the media’s portrayal of your abuse allegations against your father as an outgrowth of a twisted custody battle between Mia Farrow and him, and did not look further into the situation, for which I am terribly sorry.”

Rebecca Hall
Actress Rebecca Hall, who has worked with Allen twice—on 2008’s Vicki Cristina Barcelona and again in the upcoming A Rainy Day in New York—released a statement on Instagram, in which she writes: “After reading and re-reading Dylan Farrow’s statements of a few days ago and going back and reading the older ones – I see, not only how complicated this matter is, but that my actions have made another woman feel silenced and dismissed.” She went on to say that she had donated her salary from the film to Time’s Up.

The day after the Weinstein accusation broke in full force I was shooting a day of work on Woody Allen’s latest movie in New York. I couldn’t have imagined somewhere stranger to be that day. When asked to do so, some seven months ago, I quickly said yes. He gave me one of my first significant roles in film for which I have always been grateful, it was one day in my hometown – easy. I have, however subsequently realized there is nothing easy about any of this. In the weeks following I have thought very deeply about this decision, and remain conflicted and saddened. After reading and re-reading Dylan Farrow’s statements of a few days ago and going back and reading the older ones – I see, not only how complicated this matter is, but that my actions have made another woman feel silenced and dismissed. That is not something that sits easily with me in the current or indeed any moment, and I am profoundly sorry. I regret this decision and wouldn’t make the same one today. It’s a small gesture and not one intended as close to compensation but I’ve donated my wage to @timesup. I’ve also signed up, will continue to donate, and look forward to working with and being part of this positive movement towards change not just in Hollywood but hopefully everywhere. #timesup

Timothee Chalamet
The 22-year-old actor was asked in a recent interview with Christiane Amanpour on CNN if he had any “qualms” about working with Allen on his upcoming film, and he gave a measured response: “It’s going to be really important for me to talk about that. I hesitate to talk about it right now, because what I say will only — it’s only going to anger people. So when that film comes out — if it comes out — it’s going to be really important to talk about. But that’s not the time right now.” However, just a week later he released the following statement via his Instagram account: “I have been asked in a few recent interviews about my decision to work on a film with Woody Allen last summer. I’m not able to answer the question directly because of contractual obligations. But what I can say is this: I don’t want to profit from my work on the film, and to that end, I am going to donate my entire salary to three charities: TIME’S UP, The LGBT Center in New York, and RAINN. I want to be worthy of standing shoulder to shoulder with the brave artists who are fighting for all people to be treated with the respect and dignity they deserve.”

Rachel Brosnahan
The actress, who recently won a Golden Globe for her starring role in Amazon Prime’s Marvelous Mrs Maisel and previously worked with Allen on 2016’s A Crisis in Six Scenes, also for Amazon Studios, said in an interview on Hollywood Reporter’s Awards Chatter podcast that, “I do have to take this opportunity to say that, for me, I have really struggled with the decision to do that project for a long time. Honestly, it’s the decision that I have made in my life that is the most inconsistent with everything I stand for and believe in, both publicly and privately. And while I can’t take it back, it’s important to me, moving forward, to make decisions that better reflect the things that I value and my worldview.”

Colin Firth
Oscar-winning actor Colin Firth, who starred in Allen’s 2013 film Magic in the Moonlight with Emma Stone, gave the most succinct of statements to the Guardian on the same day that CBS News aired Dylan Farrow’s first-ever televised interview: “I wouldn’t work with him again.”

Marion Cotillard
In an interview with Hollywood Reporter last week, the Oscar-winning French actress who worked with Allen on Midnight in Paris in 2011 gave a bit of a vague statement, saying she wouldn’t likely work with him again while maintaining her ignorance on the subject. “I’m very ignorant of what he did or he didn’t do, I just see people suffering and it’s terrible. I have to say today, yeah, if he were to ask me again – I don’t think it would ever happen because the experience we had together was very odd. I admire some of his work but we had no connection on set. But I have to say if he asked me to today I would question more, I would dig more. I don’t know, I’m very ignorant about this story and I just see that it hurts to see people suffering.”