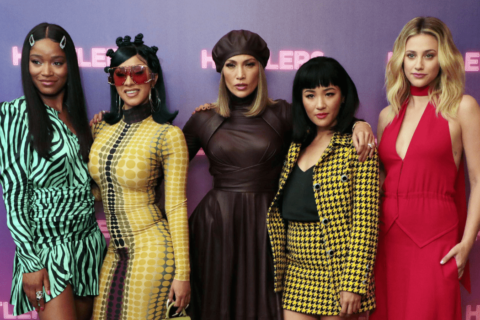 The Toronto International Film Festival is easily one of the best events to take place in the city. With countless A-list celebrities in attendance, extravagant after parties and, of course, the hottest new movie releases, it’s not hard to see why the annual event brings in 450,000 movie-goers each year. The 44th annual event is gearing up to welcome a huge amount of talent to Toronto – here’s who’s coming to town (and the films they’ll be here to promote) between September 5 and 15:

Lopez, Wu, Reinhart and Palmer will be in town promote their new film Hustlers. The film is based on a viral article that appeared in New York Magazine a few years ago and sees the four leading ladies star as savvy strippers who team up to rob their Wall Street clients.

Twilight alumn Kristen Stewart will be in town to promote Seberg. Stewart stars as Jean Seberg, a new French wave icon who is targeted by the FBI due to her romantic and political involvement with civil rights activist Hakim Jamal. The ‘based on a true story’ film is coming to TIFF, following its premiere at the Venice Film Festival.

The Academy Award-winning actress is coming to town for Wasp Network, a film which follows the increasingly complex lives of five Cuban political prisoners in the 1990s. It also stars recent Golden Globe winner Edgar Ramirez.

Noah Hawley’s Lucy In the Sky is about an obsessive astronaut, portrayed by Portman, who begins to question everything upon her return to Earth. Her charming crewmate, Jon Hamm, only seems to confuse things further. We can’t wait to see these two on the red carpet together.

Scandal star Kerry Washington is jetting in for American Son. The movie is about an interracial couple that loses their 19-year-old son, and the police are the main suspects.

Hollywood heavyweights Chris Evans, Daniel Craig, Toni Collette and Jamie Lee Curtis all star in Knives Out, a new take on a classic ‘whodunnit’ tale. The plot? A famed southern detective teams up with local police to investigate quirky suspects after the murder of a wealthy novelist.

Fan-favourite Scarlett Johannson is appearing in two films at TIFF this year. The first is Marriage Story, which looks at the journey of family life and marriage. The second is Jojo Rabbit, a comedic satire about the life of a young German boy who finds a Jewish girl hiding in his house.

Director Armando Iannucci serves up his own twist on the classic autobiographical novel by Charles Dickens in The Personal History of David Copperfield. Skins actor Dev Patel has the leading role of David Copperfield, whilst renowned actress Tilda Swinton is playing his aunt, Betsey Trotwood. The film will have its world premiere at TIFF.

Another stellar line-up of Hollywood talent is coming to town for The Goldfinch. Ansel Engort plays Theodore Decker, a grief stricken son who is sent into an odyssey of reinvention and redemption following the death of this mother. American Horror Story actress Sarah Paulson takes on the woman of the night role, while Kidman plays the socialite mother that takes in orphaned Theo.

Just Mercy stars Jordan as Harvard-educated lawyer Bryan Stevenson, who pairs up with local justice advocate Eva Ansley (Larson) to defend Walter McMillian (Foxx) when he is found guilty of a crime he didn’t commit. This thought-provoking drama is set for its world premiere at TIFF.

Streep fans, rejoice! The legend herself is slated to drop into town with Antonio Banderas and Gary Oldman to promote The Laundromat, a creative retelling of the infamous Panama Papers leak.

These two Hollywood icons are cruising into YYZ for Todd Phillips’ take on the legendary Joker. Judging by the short clips shared of the film so far, it looks utterly terrifying – here’s hoping there’s no scary surprises on the red carpet.