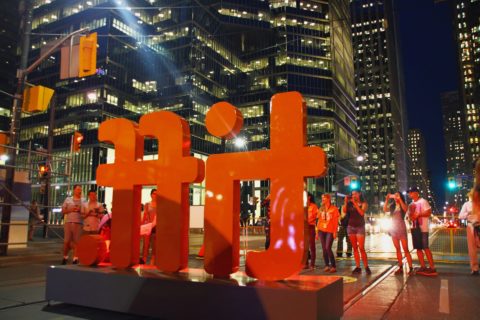 Everything to Get Excited About at TIFF This Year

There's a lot to look forward to...

The Toronto International Film Festival unofficially marks the beginning of awards season mayhem. Held every year in early September, sandwiched between the end of ‘summer blockbuster season’ and the start of ‘prestige movie season,’ it’s viewed as one of the most reliable harbingers of Oscars buzz. As Vox explains: “The festival’s timing—just after Labour Day—positions it as the de facto opening of awards season, a marathon of mostly serious dramas that lasts about six months, until the Oscars finally wrap it all up in early March.” Given its weighty importance on the film circuit, the announcement of each year’s TIFF lineup is a Pretty Big Deal. Below, some of the things to look forward to this year.

Star power
As usual, the TIFF red carpets are sure to be flooded with A-listers. We can expect to see Bradley Cooper and Lady Gaga, both starring in a remake of the iconic A Star Is Born films; Matthew McConaughey, who appears in White Boy Rick, a true story about a teenage drug kingpin in 1980s Detroit, along with Bel Powley and Jennifer Jason Leigh; and Robert Pattinson and Juliette Binoche, who star in High Life, a sci-fi film by French filmmaker Claire Denis about a group of criminals sent into outer space.

The chance for La La Land vs Moonlight Round 2
Both the directors at the heart of the infamous Oscars envelope snafu in 2017 are likely to be competing in the same awards categories next year too. Damien Chazelle is following up his smash hit La La Land with First Man, a biopic of Neil Armstrong starring Ryan Gosling, while Moonlight’s Barry Jenkins will be showcasing If Beale Street Could Talk, a film adaptation of James Baldwin’s 1974 novel about a young pregnant woman attempting to help exonerate her fiancé, in jail on a false rape charge, before the birth of their child.

Female-centric films
There’s a slew of films with women at their core: Red Joan, a true story about one of the KGB’s longest-serving British spies, starring Judi Dench; Galveston, French actress/filmmaker Melanie Laurent’s English-language directorial debut starring Elle Fanning as a young prostitute and Ben Foster as a wounded hitman on the run; Widows, Steve McQueen’s follow-up to his 2013 Oscar-winning 12 Years A Slave, starring Viola Davis, Michelle Rodriguez, Elizabeth Debicki and Cynthia Erivo as four women left to finish a heist after their criminal husbands are all killed; and Girls Of The Sun, a war film that follows a battalion of women fighting to take back their homes from ISIS extremists in Iraqi Kurdistan.

Biopics
In Can You Ever Forgive Me?, Melissa McCarthy takes a brief break from ruling the comedy game, starring in this true story about author Lee Israel, infamous for forging historical letters in the 1990s. Hugh Jackman takes on the role of US Senator Gary Hart in Jason Reitman’s The Front Runner.

Films addressing social issues
The Hate U Give, starring Amandla Stenberg, Issa Rae, Common, and Riverdale’s KJ Apa, serves as a striking commentary on America’s culture of police brutality, following the story of a young woman whose friend is shot dead by police. Tackling the issues of substance abuse are two films starring two young breakout stars from awards seasons past: Timothee Chalamet and Lucas Hedges. The former stars in Beautiful Boy alongside Steve Carrell, while the latter appears in Ben Is Back as Julia Roberts’ son.

Canadian features
Canadian wunderkind Xavier Dolan’s The Death and Life of John F. Donovan, starring Kit Harington, Jason Tremblay, Susan Sarandon and Natalie Portman, and The Hummingbird Project, a thriller directed by Kim Nguyen and starring Jesse Eisenberg, Salma Hayek and Alexander Skarsgård, are both slated to have their world premieres at the festival. Also of note is Gwaai Edenshaw and Helen Haig-Brown’s Edge of the Knife, the first feature-length film to be made in Haida, classified by UNESCO as an endangered language.

Documentaries
In the nine-minute short Emptying the Tank, Caroline Monnet documents Chippewa female mixed martial artist Ashley Nichols’ dedication to both her health and her craft, while in Carmine Street Guitars, documentarian Ron Mann captures the allure of famed New York City guitar-maker Rick Kelly. Sharkwater Extinction, the final work by late filmmaker and conservationist Rob Stewart, is the follow-up to his 2006 documentary about shark conservation, Sharkwater, which resulted in shark finning being banned worldwide.

While other film festivals this year made headlines for the paucity of female-helmed films on their roster, TIFF’s artistic director Cameron Bailey told Variety that he expects roughly a third of the final selection of films this year to be by female directors. Films with strong social messages are a recurring theme this year too, and Bailey also stressed the importance of having programming and events that address and discuss the #MeToo and Time’s Up movements, particularly their impact on the global film industry.

“We want to keep the conversation going and to give people an opportunity to talk through what this all means,” said Bailey. “One of the most important things we can do is to really showcase films by women and to make sure that we have a lineup that really reflects who we are as people.”

You can find the rest of the lineup here.

Photography via Jeremychanphotography/Getty
Get the best of FASHION in your inbox Thanks for signing up!
The latest fashion, beauty and celeb news delivered right to your email #FASHIONforall Now, check your inbox to complete your subscription
We won’t ever use your email address for anything else
Want even more FASHION? Follow us on social media.