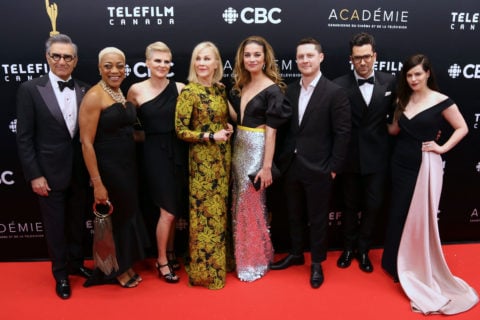 Update:
The entire cast of Schitt’s Creek is joining ‘Stronger Together, Tous Ensemble,’ the benefit concert airing this Sunday in support of frontline workers, and to raise money for Food Banks Canada. This includes Dan and Eugene Levy, Catherine O’Hara, Annie Murphy, Chris Elliott, Dustin Milligan, Emily Hampshire, Jenn Robertson, John Hemphill, Karen Robinson, Noah Reid, Rizwan Manji and Sarah Levy. In the week before the series finale of their show on April 7, the cast hosted daily Instagram Lives to raise money for the same cause, ultimately collecting funds of over $150,000 to be split between Food Banks Canada and Feeding America.

Gang’s all here for a very good cause! @CBC will be broadcasting a multi-platform, commercial-free, 90-minute special in support of front-line workers across Canada during the COVID-19 pandemic this Sunday! #strongertogether ?? https://t.co/Cy80uvNp5t pic.twitter.com/dmnJUwEryy

Original (4/20/20):
Céline Dion. Alessia Cara. Shania Twain. Bryan Adams. Buffy Sainte-Marie. Sarah McLachlan. Michael Bublé. Some of the biggest names in Canadian music are coming together this Sunday for a special event, titled ‘Stronger Together, Tous Ensemble,’ to raise money for Food Banks Canada and to celebrate Canadian frontline staff across various industries working in the fight against the coronavirus.

“Front-line workers, across so many sectors, including food banking, have been drastically impacted by COVID-19,” said Chris Hatch, CEO of Food Banks Canada, in a statement. “They need our support and we are thankful for Stronger Together, Tous Ensemble for helping our most vulnerable neighbours.”

A similar charity event took place this past weekend, organized by the World Health Organization and Global Citizen. One World: Together at Home featured performances by Lady Gaga, Shawn Mendes, John Legend, Celine Dion and others, as well as appearances by Oprah Winfrey, Beyonce, Bill and Melinda Gates and more.

Photo by Isaiah Trickey/FilmMagic
Get the best of FASHION in your inbox Thanks for signing up!
The latest fashion, beauty and celeb news delivered right to your email #FASHIONforall Now, check your inbox to complete your subscription
We won’t ever use your email address for anything else
Want even more FASHION? Follow us on social media.