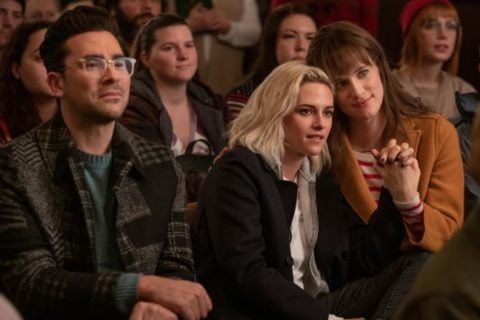 We’ve got a lot of time on our hands right now. Here are all the movies and television shows we can’t wait to watch on streaming services—including Netflix Canada, Amazon Prime Video and CBC Gem—in December 2020.

Happiest Season
The highly anticipated queer rom-com starring Kristen Stewart and Mackenzie Davis is finally here. The two actresses play a couple (Abby and Harper) whose lives are about to get complicated when they visit Harper’s family for Christmas. Dan Levy co-stars as Abby’s best friend, and the cast is rounded out with a list of impressive names including Victor Garber, Mary Steenburgen, Aubrey Plaza and Alison Brie. The movie also features original music by Canadian duo Tegan and Sara, Bebe Rexha, Sia and others. Available December 10

The Wilds
Part survival drama, part dystopian slumber party, this thriller follows a group of teen girls from different backgrounds who must fight for survival after a plane crash strands them on a deserted island. One thing to know: these girls did not end up on this island by accident. Available December 11

Palm Springs
This sweet rom-com stars Andy Samberg and Cristin Milioti as two people who have a chance encounter at a mutual friend’s wedding in Palm Springs. Things get complicated when the pair find themselves unable to escape the venue, themselves, or each other. Available December 18

Yearly Departed
This series of eulogies for the year 2020 features a star lineup of female comedians such as Rachel Brosnahan, Ziwe Fumudoh, Tiffany Haddish, Natasha Rothwell and Sarah Silverman. “After a year of societal upheaval, plague, murder hornets and banana bread,” Yearly Departed promises to “give 2020 the huge send-off it deserves.” Available December 30

The Prom
A teenage girl in a small, conservative Indiana town is fighting her high school’s leadership in order to bring her girlfriend to prom. A group of down-on-their-luck Broadway stars decide to head to the town to help with her cause, and to get themselves some much-needed publicity. The film stars Meryl Streep, James Corden, Nicole Kidman, Keegan-Michael Key, Andrew Rannells, Kerry Washington, Ariana DeBose and Jo Ellen Pellman. Available December 11

Selena: The Series
This coming-of-age story follows Tejano singer Selena Quintanilla from her childhood to her breakout turn on the music scene. It also chronicles the heartbreaking tough choices she and her family must make as they navigate the highs and lows of success, loss, love and music. Available December 4

Ma Rainey’s Black Bottom
Adapted from a play by August Wilson, this film stars Viola Davis as legendary blues singer Ma Rainey. Tensions rise over the course of afternoon in 1920s Chicago, when the singer and her band gather at a recording studio. Chadwick Boseman plays one of the musicians in her band, in his final film performance before his death this past August. Available December 18

The Midnight Sky
This post-apocalyptic tale follows a lonely scientist in the Arctic, played by George Clooney, as he races to stop a group of astronauts from returning to Earth, where a mysterious global catastrophe has taken place. The film also stars Felicity Jones, David Oyelowo, Kyle Chandler, Demián Bichir and Tiffany Boone. Available December 23

Quiz
Based on the true story of Charles Ingram, a former British army major who was caught cheating on the game show Who Wants To Be A Millionaire?, this series stars Matthew Macfadyen, Sian Clifford, Mark Bonnar and Michael Sheen. Available December 4

Funny Boy
Set in Sri Lanka in the 1970s and 80s, this film (based on a queer coming-of-age novel by Shyam Selvadurai) explores the sexual awakening of a young boy, against the backdrop of civil war between the minority Tamils and the majority Sinhalese. Directed by Indo-Canadian filmmaker Deepa Mehta, the film has been chosen as Canada’s submission to the Academy Awards for Best International Feature Film this year. Available December 4

Alone Together: Personal Stories From the Pandemic
Selected and funded by the CBC Creative Relief Fund, several Canadian documentary filmmakers have been capturing real moments—from light-hearted to serious—of life in the pandemic. Their series of films will be made available for streaming across Canada through December 2020, beginning on December 4. Titles include Covid & Who I Am Now, which follows a young Chinese-Canadian medical student who was attacked during the COVID-19 pandemic, as she struggles with her self-identity amid rising anti-Chinese racism, and Inendi [She is Gone], which sees Indigenous activist Sarain Fox sitting down with her oldest matriarch, Mary Bell, to gather her stories and preserve her Indigenous cultural legacy during this year of tragedy. Available December 4

Stylish With Jenna Lyons
Style icon and former president of J.Crew Jenna Lyons is branching out on her own with a television show that’s part reality show and part-competition series. The eight-episode show follows her as she tackles design projects ranging from hosting mobile fashion makeovers to designing her new office to launching a new brand. At the same time, Lyons will be putting a diverse group of people to the test as they compete for a position on her new business venture’s creative team. Available December 3

Let Them All Talk
Meryl Streep stars in this film as a renowned author on a cruise with old friends and her nephew, in an effort to find fun and happiness while coming to terms with her troubled past. The film also stars Candice Bergen, Dianne Wiest, Gemma Chan and Lucas Hedges. Available December 10

Letterkenny: Season 9
Season 9 of Crave’s acclaimed original comedy series begins streaming on Christmas Day with seven all-new episodes dropping at once. This season kicks off with the Hicks, Skids and Hockey Players attending an American Buck and Doe. Available December 25

Shameless: Season 11
The eleventh and final season of this dramedy finds the Gallagher family and the South Side at a crossroads with changes caused by the COVID-19 pandemic, gentrification and aging. Frank confronts his own mortality, Lip struggles with the prospect of becoming the family’s new patriarch, Ian and Micky learn to adjust to life as newlyweds, Deb embraces her individuality and single motherhood, Carl finds an unlikely new career in law enforcement, and Kevin and V wonder whether a hard life on the South Side is worth fighting for. Available December 6

The Photograph
This film starring Issa Rae and Lakeith Stanfield follows a series of intertwined love stories set in the past and present. When famed photographer Christina Eames dies unexpectedly, she leaves her estranged daughter (Rae) with many questions, which eventually lead her to an up-and-coming journalist, played by Stanfield. Available December 18

Felicity
All four seasons of beloved ’90s show starring Keri Russell drop on Crave on Christmas Day. The show begins with Felicity Porter, a shy teenager, asking Ben Covington (Scott Speedman) to sign her high school yearbook. What he writes is so insightful and poetic, it persuades Felicity to change the course of her future. Available December 25

image courtesy hulu
Get the best of FASHION in your inbox Thanks for signing up!
The latest fashion, beauty and celeb news delivered right to your email #FASHIONforall Now, check your inbox to complete your subscription
We won’t ever use your email address for anything else
Want even more FASHION? Follow us on social media.