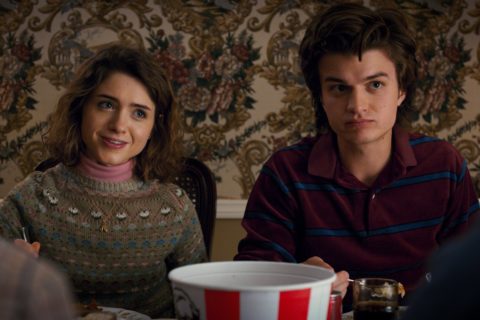 Prepare to have your world turned upside down (again), because Stranger Things 2 is now officially streaming on Netflix. The sophomore season of the show promises all the vintage nostalgia, spooky magic and jump scares of season one, but takes the story to new places with fresh plotlines and added characters: both human and supernatural. Before heading back to Hawkins this weekend, check out a few behind the scenes stories from the stars of the cast. We headed to LA to meet up with 2/3 of our favourite Stranger Things love triangle, Natalia Dyer (Nancy Wheeler) and Joe Keery (Steve Harrington), to talk about the new season’s fear factor, what happened to Barb, and who’s into pansting on set. (Spoiler: it’s exactly who you think it is.)

On the pressure of making Season two.

There was at least one major difference when the cast arrived on set to film season two: “higher security on things like scripts, story stuff and pictures,” Natalia told us. The show’s creators, brothers Matt and Ross Duffer, filmed season one of the 80’s sci-fi horror under the radar. But ICYMI, the series has become one of streaming’s biggest success stories—meaning the stakes for season two were set a little higher.

Did the pressure to live up to season one’s hype change the vibe on set? Not for Joe Keery: “Once you’re there it’s like back to school. Back to putting on the old shoes.” Joe’s seems fairly confident season two will be a success, and credits the Duffer brothers for keeping the story fresh. “The best sequels throughout time keep what you really like about the first thing, but they aren’t afraid to do their own thing for the next season and kind of grow in a way. And I think that by adding these new characters and new themes they’ve done a really good job of incorporating things you really like about the first season and things that you hope will carry over: the vibe, the way it makes you feel. But then the story goes to new and interesting places.”

On the new monster.

Is season two’s looming threat darker than the Demogorgon? “I think it’s scarier,” Joe said. “It’s a little bit more all consuming. Instead of it being just this one thing that can get you in one way, it’s more of an entity.” Nodding in agreement, Natalia said that in season two of Stranger Things “it feels kind of all connected. What we saw in the first season is just a small fraction of what we’re really dealing with. I think in this season we get a better idea of what is going on.” Scared yet? We are.

Will there be #Justice4Barb in season two? She’s still dead, but her legacy lives on. Sort of. “For Nancy this season, the thing that drives her whole arc is her relationship with Barb,” Natalia told us of her low-key, loyal, lovable (and dead) BFF from season one. “I imagine that the fan response from season one maybe put an impetus on that story line and maybe made the brothers feel like they needed to address it more.” Barb reached cult status this year, and if anyone understands our frustrations with her untimely death, it’s Natalia. “It is a huge thing to have happened! Realistically losing anybody is a big, big deal.”

On working with the kids.

Our favourite new subplot? Steve the babysitter. According to Joe—who worked closer with the younger cast mates in season two— the Stranger Things kids are just as wild as one might imagine. “It’s crazy because one second we’ll be in a scene and the next they’re joking and punching each other, pantsing each other, yelling profanities at each other. They switch it on and switch it off and they don’t take it that seriously.” Of course it’s not all pranks and swear words, Joe said that when the cameramen yell action the kids snap right back into their roles. Which sounds like a good thing for Joe’s character, because “in the same way Steve needed Nancy last year to grow up,” Joe told us, “he needed the kids this year to grow up.”