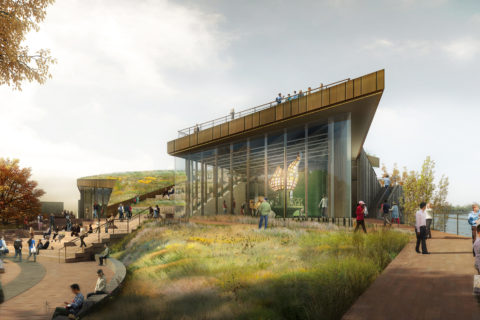 The new Statue Of Liberty Musuem, which opens May 16. Photo Courtesy of FXCollaborative
Celebrity

Diane von Furstenberg knows how to throw a launch party. In this case, the famous designer is inviting a billion people to celebrate the opening of the new Statue of Liberty Museum. “The goal was to make this the biggest opening of a museum ever,” she said at a prelaunch gathering in New York yesterday.

Considering the island where the museum and iconic statue are situated is only about 14 acres, she required a little assistance from Apple to make that happen. In addition to helping raise $100 million to build the museum, which opens this Thursday (May 16), von Furstenberg asked Tim Cook to create an “Apple experience.”

“I didn’t know what I was saying when I asked him that,” she laughs. “But the AR experience [they created] is pretty amazing. Now anyone in the world with an iPhone or iPad can access the museum.”

The Statue of Liberty app, which was developed by Yap Studios using the Apple ARKit, has three AR experiences. Torch Panorama transports you to the top of the statue—a vantage point that IRL hasn’t been open to people since 1916—and gives you a view of the island and the city from sunrise to sunset.

Making of the Lady Liberty zooms in on the statue, which was created by French sculptor Frederic Bartholdi and brought to American in 1885. You can see how it’s aged over the years from its coppery orange to green. In x-ray mode you can tour inside to see the iron tower that Gustav Eiffel created to hold the structure together. You can also transport (Pokémon-style) a life-sized model of the statue’s foot anywhere in the world.

The Historical Time-lapse shows how the city’s skyline and harbour has changed over the past 200 years. In addition to its immersive features, you can also learn about the statue’s storied history. If you’re one of the 4.5 million people who visit the island each year, you can use the app to access an audio tour and map as well as listen to a three-part podcast created by Frqncy Media called “Raising the Torch,” which explores the concept of liberty and is narrated by von Furstenberg.

Her own history with the statue dates back to the time her parents were visiting New York and sent her a postcard of Lady Liberty. The next time she saw it was from the vantage point similar to thousands of other immigrants who arrived in the New York harbour by boat. She was 22 and moving from Belgium to New York to join her then husband, Prince Egon von Furstenberg.

“Other than those two occasions, she [the statue] didn’t really mean anything to me until I got involved with the project and really dug into its history,” von Furstenberg said. Getting involved, however, took some convincing. Stephen Briganti, the president and CEO of The Statue of Liberty-Ellis Island Foundation, had asked her repeatedly but she always said her husband would divorce her if she joined another board. She had sent Briganti a copy of her book, “The Woman I Wanted to Be” not knowing that this would seal the deal.

“He read the book and underlined something my mother had written,” she recalled. “My mother was in a concentration camp for 13 months; she survived and I was born after. She wrote me a note, which I wrote in my book, in which she said, ‘God saved me so that I could give you life. By giving you life, you gave me my life back. You are my torch of freedom.’ Steve underlined that and said ‘Your mother said you were the torch of freedom, you have to do this.’”