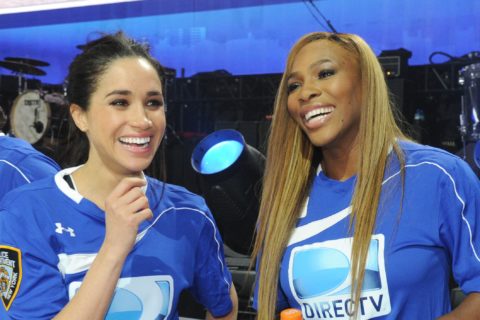 In an interview with Access Hollywood about her new jewellery line, Serena Williams was asked whether she relates to Meghan Markle’s recent interview in which she talked about the pressures of being in the spotlight.

“Im not sure many people can relate on that level,” she said. “I don’t think I can. I really think she’s the strongest—literally, the strongest person I know and the nicest, sweetest. She flew all the way with a newborn to see me play in New York and flew all the way back that night, and I probably couldn’t have done that.”

The match Williams is referring to is her US Open final against Canadian tennis champ Bianca Andreescu. The Duchess, at the time, received some criticism in the press for taking a solo trip to New York, leaving baby Archie at home in England. But Williams, understandably, saw the gesture as further evidence of Markle’s commitment to her friends. (The two met at the 2010 Super Bowl in Miami and have been firm friends ever since.)

“It just kind of goes to show you what an amazing person that she is, and that’s just one of the many things that she does for me,” Williams continued. “I call her, text her anytime, crying, upset—she’s always there. Doesn’t matter what she’s going through, she just sets time away, and she’s just so amazing.”

You can watch the full clip below: