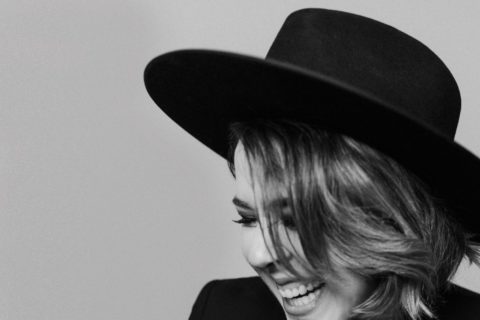 Serena Ryder on Breakups, Depression and Her New Music

"It was so important to me because what made my struggle the hardest was thinking that I was the only person going through this."

Serena Ryder was only eight years old when she first performed onstage. It was at a legion hall in Millbrook, Ont. (population: 1,632). She basically hasn’t stopped performing since, whether she’s practising new songs at small clubs or singing for sold-out crowds. So it’s not surprising when she breaks into song during our interview. Twice.

Over the years, Ryder has steadily been making a name for herself as Canada’s next big pop export. She released her first album in 1999 and won the Juno Award for New Artist of the Year in 2008. But as her career was taking off, she suffered a months-long, stay-in-bed-all-day bout of depression. Thanks to a good therapist, anti­depressants and falling in love, she emerged from her darkest period stronger than ever. The result was her breakout album, Harmony, and its quadruple-platinum single, “Stompa,” a rallying cry about getting up, allowing music to heal your soul and, yes, stomping your feet.

Serena Ryder’s new album, Utopia, keeps that feeling going with groovy romps like “Electric Love” and slow-burner ballads that recall her early career, when she was just a small-town Ontario girl with an acoustic guitar and a killer voice. This fall, the 34-year-old embarks on her headlining cross-country tour. She might not stop at any legion halls, but she’ll still feel right at home.

FASHION: It’s been five years since the release of  Harmony. What have you been up to?

Serena Ryder: “I ended up touring Harmony for four years, and the crowds kept getting bigger and bigger. For me, a musician who’s been doing this since I was, like, eight years old, it was an amazing and humbling experience. I loved every minute of it, but, by the end, I needed a break. At the time, I was also going through a breakup, so I was thinking: ‘What am I going to do? Where have I always wanted to live?’ I’ve always loved the ocean, so I moved to California, near Venice Beach.”

You recorded Harmony in a small cedar-clad studio in Toronto dubbed “the cottage,” so I was surprised you moved to Los Angeles—it’s such a contrast. I remember thinking at the time, “Where did that come from?” And it was during a breakup?

“That was a huge part of it. And it was also the ending of an album cycle, which is not necessarily like a breakup, because you know you’ll perform those songs again, but it’s the end of something that was once new. I knew the next step was to make another record, but first I needed to do a little living. I feel like a lot of artists feel pressured to release something right away. In L.A., I spent a lot of time [hanging out] by the ocean and riding my bicycle around Venice Beach. I felt like I was in a Jim Morrison song; I was just taking in everything—the sights, the sounds and the people—and then I started overflowing and I was like ‘I need to start writing—now!’ I had so much to say, and I felt like all of my emotions had exploded.”

I heard you had nearly 100 songs for the new record that you then whittled down to 12. Did it feel like you were killing your babies?

“Oh, no, it didn’t. There’s a life to those other songs—just because other people aren’t hearing them doesn’t mean they don’t exist.”

You have performed with Melissa Etheridge and recorded a duet together, “Broken Heart Sun,” and now the two of you are really good friends. How did you meet?

“I wrote that song, and the producer showed it to Melissa and she loved it. She ended up singing [her parts] in L.A. The song was on the radio and I still hadn’t met her. We met in 2011—and you know when you meet someone and you’re like ‘I feel like I’ve known you my entire life’? That’s what happened. We looked at each other and were like ‘Hey, soul sister, how’s it going?’ It’s funny because for my entire life people have been comparing me to her. We bonded instantly.”

While you were doing press for Harmony, you talked openly about your struggle with depression. You could have just released the album without that context and nobody would have known the difference. Why was it important for you to talk about it?

“It was so important to me because what made my struggle the hardest was thinking that I was the only person going through this. If it’s going to help even one person to know that someone who is a semi-celebrity and who seemingly has their shit together has gone through depression, it’s worth it. If I can do it, then anybody can go through it. There was no way I could have kept my mouth shut.”

Is songwriting therapeutic for you?

“Absolutely. It’s the way I’m able to express my inexpressible emotions and feelings.”

I’ve always been envious of creative types who can find a catharsis in playing music, writing or making art. I find eating chips and watching Netflix therapeutic.

[Laughs] “Dude, I find that therapeutic, too. But there’s also joy in hearing or experiencing art. I get so much joy from listening to a beautiful song or watching a movie that just gives you all the feels.”

Do you remember the first song or musician that you listened to where you thought “Oh, my God, this is everything”?

“Leonard Cohen was gigantic for me. He put all my crazy emotions into words and wove them into a perfect ocean of music. I remember being in my bedroom as a 12- or 13-year-old, candles lit and lights dimmed, and listening to ‘Suzanne’ on vinyl over and over again.”

“I didn’t know the reality outside where I was, so my imagination was gigantic. I grew up thinking that the outside world was this place I might never see and that there were people and cultures I might never see. What I was aware of was based on movies, television and MuchMusic. I always felt like something was going to explode out of me. When I first started writing and creating my own music, that was my outlet. Music and art are so important for children, especially in their formative years, because there are all of these emotions swimming and circling around [them]. In small towns, if you don’t know where to put that energy, it can end up in really bad places.”

What do you love about touring?

“The shows—performing and seeing the audience’s faces. The best part is when the album has been out for a little while and people start learning the words and singing them back to you.”

It’s interesting that you say you look at people’s faces when you’re performing, because when I’m in an audience, I always think I just look like a blur.

“It’s hilarious because I feel like so many audience members don’t realize that I can see them. Sometimes I have to say ‘Hey, guys, this isn’t a TV show. I can see you looking at me, so if you want to smile or wave, I’ll wave back. Let’s do this together!’ Audience members are kind of shy, like ‘Oh, she doesn’t know I’m here.’ You’re the reason I’m here! Of course I know you exist.?