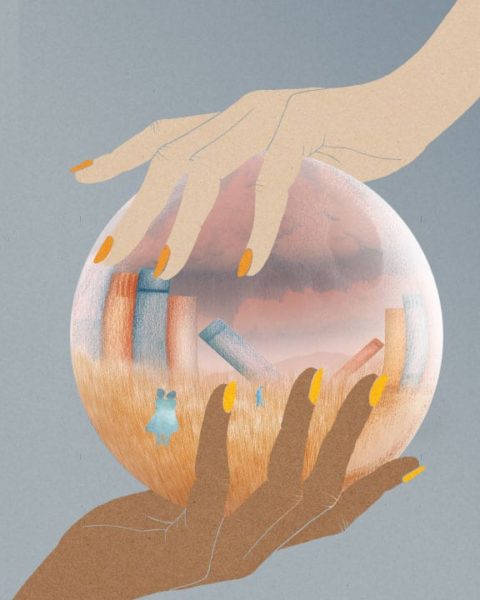 Every month has a mood, a feeling, some combination of memories, moments and nostalgia. You know it—you feel it—even if you’ve never really thought about it. To help encapsulate the moods of the months, we’re asking novelists to take on the calendar and evoke the feelings of each season through fiction, memoir or some mix of the two. Here, novelist Elizabeth Hay, author of the Writer’s Trust Award winning All Things Consoled: A Daughter’s Memoir illustrates September. See how other authors have represented your favourite months here.

September is all nerves. Yellow school buses reappear, and brave children shoulder their knapsacks. The songbirds have gone south, and only we northerners remain.

In anticipation, August cooled off halfway through and became complicated. Winds blew in from the east; brisk clouds travelled the horizon. Swimmers stood chilly on the dock. The change began then—this change that gives September light the white glare of chalk, a glint of fluorescent harshness. Then, precisely as school begins, September doubles back on itself and taunts us with the most beautiful weather we’ve had all summer. “Nah, nah, nah,” it says to the children behind their desks.

September is the first blank page of an essay, the oncoming headlights of tests and exams, the burden of homework. Your life is no longer your own.

Every year, we took a snapshot of our children on the first day of school. Our son and daughter struck a pose on the front porch in their clean clothes and scuffed knapsacks right before embarking on their trek to the “valley of the lost lagoon,” as my son once called it. Years later, when he was in his 20s, I asked him what three words came to mind when he heard the word “school.”

“Lonely, nausea, lunch,” he said. And with those words, that time in his life (and mine) flooded back—and so did September. I laughed, as did he, but with a kind of horror.

September is to our months what Monday morning is to our weeks. It’s the knot in the stomach as serious life begins. It’s the jarring contrast between the luxury of summer and the reality of now. However briefly, until we adjust to the change, we are children again on the first day of school.

Yet when this same son asked me some years ago what my current novel was about and I said school, he responded with a big intake of air. “I’ve always loved books about school. Jane Eyre. After Jane left school, it was never the same for me.”

He admitted that the intenser experiences in his memory were all at school, though what he wanted to talk about was not himself but the books he had loved. Merlyn teaching Arthur in The Once and Future King; the bad boarding school followed by the good in David Copperfield; George Orwell writing about his terrible time at school in “Such, Such Were the Joys.” However painful and visceral, these stories were about growth, about changing and expanding, about the give and take between teachers and students and about the powerful friendships that school thrusts you into.

Remembering our discussion now makes me want to argue that September is the most dramatic month of all, being an ending and a beginning in one. Easy days are over. We are heading into a time that will test us. That’s the feeling. That’s the mood. No matter how old we are, it’s a month for learning yet again how to begin.