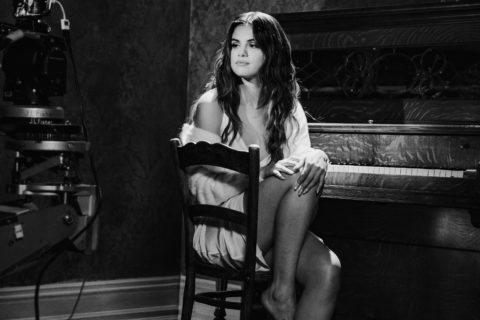 “I felt having these two songs released back to back completed the story of how one can rise no matter what challenges life brings."

Selena Gomez is back with a new single, ‘Lose You To Love Me,’ and not only is it the singer’s first solo single since 2018’s ‘Back To You,’ but it’s also her first music video shot entirely on an iPhone.

Mirroring the raw vulnerability and honesty of the lyrics, the black-and-white video focuses on Gomez seated on a wooden chair in an otherwise-empty wallpapered room. “This song was inspired by many things that have happened in my life since releasing my last album,” said Gomez in a statement. “I thought it was important to share the music, as I know many can relate to the fact that the road to self-discovery generally comes through the scars in one’s life. I want people to feel hope and to know you will come out the other side stronger and a better version of yourself.”

Thank you all for standing by my side through the highs and lows. I couldn’t do it without you all and I can’t wait to start my next adventure with you. ? Lose You To Love Me is out now. #ShotOniPhone

Shot by legendary music video director Sophie Muller on an iPhone 11 Pro, the camera never leaves Gomez’s face, taking viewers on a journey through the same rollercoaster of emotions the singer is experiencing in the song. Muller’s not the only one to shoot an entire music video or even feature film on an iPhone. The video for Montreal singer Charlotte Cardin’s 2018 single ‘California’ was shot on an Apple device, as were not one but two Steven Soderbergh films and the music video for Edward Sharpe & The Magnetic Zeros’ ‘No Live Like Yours,’ shot by Olivia Wilde.

You can watch the full music video below, and for a complete timeline of Gomez and Justin Bieber’s relationship (whom many believe the song is based on), head here.

Update: On the heels of the single’s release, Gomez released another track, titled ‘Look At Her Now.’ “I felt having these two songs released back to back completed the story of how one can rise no matter what challenges life brings,” says Gomez. “Turning off the noise and living your life on your terms.” The colourful, dance-heavy video for this new upbeat song is also shot by Muller on an iPhone 11 Pro.