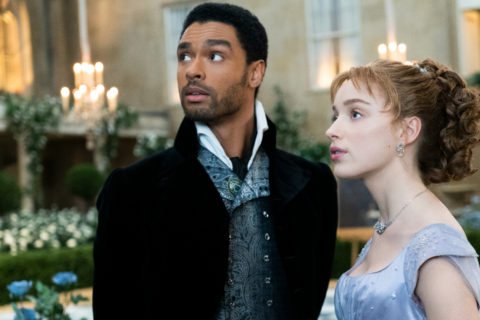 Bridgerton Seasons 3 and 4 Have Been Confirmed

Here's everything we know (so far) about season 2 of the Regency-era Netflix hit.

This article was originally published in February 2021.

If you’re anything like us, you recently spent a solid eight hours living in Lady Whistledown’s world, enraptured by actor Regé-Jean Page’s spoon-licking and imagining what life would be like as a Bridgerton duchess.

Based on a series of young adult books by Julia Quinn, the first season of Bridgerton revolved around the life of dashing duchess-to-be, Daphne Bridgerton, and her hard-headed, eventual husband Simon Basset, Duke of Hastings. The world of 19th century England bustles around them, with the fanciest of clothing, the juiciest of gossip, the most dramatic of balls and, of course, the most fiery of romances. The first season dropped in December last year, and the word is we have more jaw-dropping Regency-era fashion, steamy sex scenes and casting diversity to look forward to in the upcoming second season.

Until it’s released on Netflix and we can commiserate with our on-screen loves once more, here’s everything we know — so far! — about season 2 of Bridgerton.

Will there be a Bridgerton season 2?

Executive producer Shonda Rhimes et al will be blessing Bridgerton lovers with a second season. While there’s no official release date as of yet, the second season will be in production by spring of this year, per a @shondaland Instagram post and an official press release from Netflix.

In an interview with Today, the show’s creator Chris Van Dusen teased that eligible bachelor Anthony will be getting a lot more screen time in season 2. “Anthony is going to have a love interest and it’s going to be as sweeping and as beautiful as viewers have come to expect from the show,” he told the publication.

Fan of the books know that the next novel in the series, The Viscount Who Loved Me, focused heavily on a certain strong-willed woman, Kate, promenading into Anthony’s heart (and breeches — see image below for said breeches).

Who will join the cast for Bridgerton season 2?

Lady Whistledown (voiced by Julie Andrews) will have a new young woman to gossip about come season 2. British actress Simone Ashley, known for her roles in Netflix’s Sex Education and Broadchurch, will join the cast as Kate Sharma, Anthony’s love interest.

In the official description of The Viscount Who Loved Me, Kate is described as a “spirited schemer” and the “most meddlesome woman to ever grace a London ballroom.” Um, sign us up.

Is Regé-Jean Page really not coming back for the second season of Bridgerton?!

Tragically — for us, and the spoon — Page, who played the Duke of Hastings in season 1, will not be reprising the role in season 2. The official Shondaland Instagram account shared the news on April 2, writing (from the desk of Lady Whistledown, naturally): “Dear Readers, while all eyes turn to Lord Anthony Bridgerton’s quest to find a Viscountess, we bid adieu to Regé-Jean Page, who so triumphantly played the Duke of Hastings.” The caption continued: “We’ll miss Simon’s presence onscreen, but he will always be a part of the Bridgerton family. Daphne will remain a devoted wife and sister, helping her brother navigate the upcoming social season and what it has to offer – more intrigue and romance than my readers may be able to bear.” Many fans in the comments shared desperate pleas, hoping this was a late April Fool’s joke, but at the time of publication, the news appeared to be legit, with Page sharing his own farewell post on the platform.

Can we expect to see more extravagant Bridgerton dresses in season 2?

Aside from the tantalizing love scenes, forbidden romance, and rampant gossip, the costumes are the hit of the show — and we’re going to see way more where they came from.

The lush costumes featured on Bridgerton are impressive pieces of craftsmanship. The hands and heart behind the designs is 71-year-old New York native Ellen Mirojnick, also known for her work in Fatal Attraction (1987), Wall Street (1987) and Basic Instinct (1992).

Mirojnick created about 7,500 pieces making up a total of 5,000 on-screen costumes, she told Vogue last year. In 2019, Quinn shared images of Mirojnick’s moodboard for the show, heavily influenced by the Regency period in London.

Penelope Featherington might get a bit of the spotlight, too

The final scene of season 1 showed Penelope Featherington (Derry Girls‘ Nicola Coughlan) riding away in a horse-drawn carriage, implying that perhaps she knew a thing or two about the identity of the mysterious Lady Whistledown. It seems like the show’s second season will present an opportunity for Penelope to step into the spotlight.

“I’d love to go on that journey with her, to see how she’s changed,” she said in a December 2020 interview with the U.K.’s Radio Times. “I’d really love to come back because I feel like we’ve just scratched the surface.”

Lovers of Quinn’s novels know that Penelope’s time for romance is coming soon, if not in season 2 then the next.

Will we finally find out who Lady Whistledown is?

By the end of the first season, we get a hint that one Penelope Featherington might either be Lady Whistledown, or be helping her. Will the identity of the elusive Lady W ever be confirmed?

You’ll have to watch season 2 along with us to find out.

Will there be more than two seasons of Bridgerton?

Good news, Lady Whistledown devotees: there will be at least two additional seasons of the period romance. Netflix announced on April 13 that Bridgerton had been renewed for seasons three and four.

Plot details are scarce, but if the show continues to stay true to the books, it’s safe to assume that season three will follow An Offer from a Gentleman, which focuses on Benedict (the second eldest Bridgerton brother), and that season four will cover Romancing Mister Bridgerton, a fan-favourite book that tells the love story between (spoilers!) Colin and Penelope Featherington. But only time will tell.