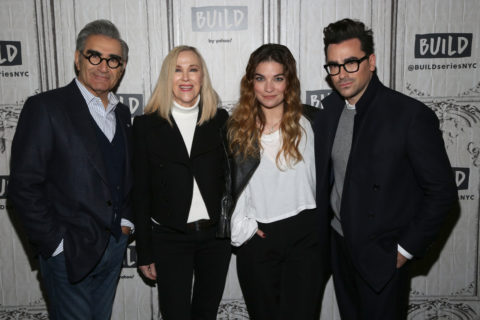 In other words, it's simply the best.

Following their Emmys sweep earlier this month, Schitt’s Creek shot to the top of global social media charts. According to The Hollywood Reporter, the Canadian show reached No. 1 on its Social Climbers chart, a weekly list ranking the most popular TV personalities and shows on Facebook, Instagram, Twitter and YouTube.

The chart’s methodology “blends engagement to entities’ social media accounts along with weekly additions of followers/subscribers,” and is based on global data provided by social media analytics company MVP. For the first time ever, Schitt’s Creek snagged the top spot in THR’s Top Scripted list, recording gains in all social metrics this past week. It received 3.4 million Instagram favourites, up 3,781%; and 982,000 Twitter likes, a boost of 3,239%.

Huge, huge, massive, enormous congratulations to the entire cast and crew of Schitt's Creek for winning the Outstanding Comedy Series #Emmy! Wishing everyone could have been together tonight to celebrate ???

Though Schitt’s Creek had been on the air for six seasons, it was only during its final season that it racked up a whopping 15 Emmy nominations (earning four nods but no wins in its prior season). Its 9 Emmy wins this year make it the only comedy to ever have taken home so many statuettes in a single season. The 2020 awards ceremony also marked the first time in Emmys history that one show swept all four acting categories—Annie Murphy, Catherine O’Hara, Dan Levy and Eugene Levy all took home awards for their portrayal of the iconic Roses.

The final season of the show aired on CBC from January through April 2020, but it’s only landing on Netflix now. Mark your calendars, season 6 drops on the streaming platform on October 7.