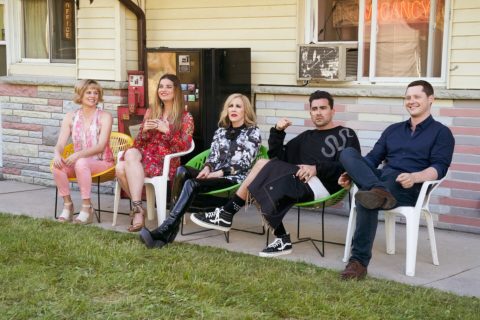 "The wrap parties have been the most fun. They're just ridiculous. Everyone goes to karaoke at the end of the night, and those are some of the funniest moments," says Amy Julia Segal.

If you sobbed through Best Wishes, Warmest Regards, the one-hour documentary special following the series finale of Schitt’s Creek, you have Amy Julia Segal to thank (or blame). Segal began working with the show back in season one, doing their digital content and mockumentary-style webisodes, which evolved into the Behind-the-Episode interview series (the latest of which can be found here).

“Dan and I started talking about the documentary at the end of season 4,” says Segal over the phone from her home in Toronto. “We started talking about it because the momentum of the show had really picked up and I was just watching my friends go through this process and it was kind of surreal. We talked a little bit about it and when I started to make it, it evolved into something bigger because of the [impact] the show has had on so many people globally and culturally. And we got to capture that, which was very cool.”

FASHION spoke to Segal about the process of shooting the Best Wishes, Warmest Regards documentary, her relationship with Dan and Eugene Levy, her favourite on-set memories and more.

On why making the documentary was so important to the whole team
“The fans meant so much to everyone and they were so involved and they kind of got the ball rolling on having a wider audience discover the show. They were talking about it online for years, and people started to catch on. Dan really wanted to thank them in a special way and wanted to show them the behind-the-scenes of things on set and open that world up to them. They just have meant so much to the cast and the crew, and changed their lives. It’s just such a lovely community that has come together because of the show and I think Dan really appreciates all of it.”

On shooting the last table read of the show
“We shot the first and last table reads of Season 6. Over the season, I think it kind of hit everyone at different times. The very first table read was very normal because everyone was ready to come back to work and fresh, and excited for the final season. By the end everyone was exhausted and weepy. Everyone got way more emotional by the end.”

On who was the most emotional during the documentary interviews
“Dan was emotional but he’s pretty together; I think he was more emotional on set. I think Sarah got pretty emotional without wanting to or thinking she would. I think everyone did. They all sort of went into it being like ‘you’re not going to make me cry.’ Because I really did want to make everyone cry (laughs). They were all like ‘nope, not gonna happen’ but I think almost everyone did.”

On her friendship with Dan Levy
“Dan and I have been friends for about 14 years. We were friends, and then we ended up working together at MTV on MTV Live and then the Hills After Show. We always just had a great working relationship and have the same taste and laugh at the same things. So when [they started] to make those webisodes, I was sort of the first person he called to get involved with that.”

On her best memories from the show
“It’s always a fun time on set except when we’re filming the last day or when Ted and Alexis are breaking up but I think the wrap parties have been the most fun. They’re just ridiculous. Everyone goes to karaoke at the end of the night, and those are some of the funniest moments. Also, the Behind the Episodes are fun because we’re there from 9am to 5pm and getting loopy as the day goes on. They’re a group of really cool, really nice people so it’s enjoyable to be around.”

On the most emotional day of shooting
“Definitely the last day on set. At the beginning of the doc you can see Dan waking up for that day. We hid in his room and got him actually waking up, and that was at like 5am and I think they wrapped at 9pm that night. They shot it so the whole crew would be on set that day and the whole cast, and it was devastating. Any time a character wrapped, there was a sob fest. I think it’s been such a special show for Dan. And Eugene is so proud of him. Just watching their whole family celebrate that day was very emotional. There wasn’t a dry eye in the house and capturing that kind of felt invasive a little bit, but I think hopefully they appreciated it.”

On what she learned about Dan through working on the show
“I’ve always known he’s a genius and he really pours his whole self into the show. What I thought was really cool and didn’t really know the inner workings of, was how involved he was with wardrobe. Watching him create these outfits with Catherine was really interesting to me. I wanted that part [of the documentary] to be like two hours long. It is really cool, if you’re into fashion. I’d see him buying all this stuff on eBay and Grailed and all these sites but watching them put it together was very cool, and how involved he was with it was amazing. There’s honestly so much that I couldn’t put in, that I wish I could have. I might work on a longer Director’s Cut while we’re all stuck inside during Covid (laughs). We’ll see.”