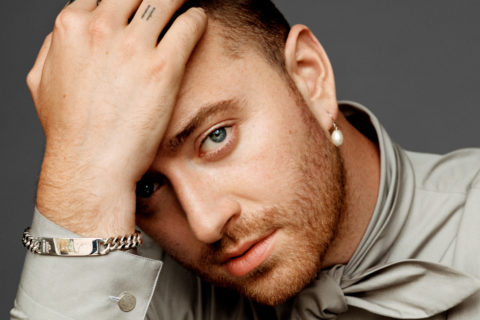 Sam Smith: “Becoming Famous is One of The Main Traumas of My Life”

We caught up with the Grammy Award-winning artist ahead of the drop of their newest album, Love Goes, today.

Sam Smith is on their last interview of the day to promote their new album, Love Goes, at a London hotel and has been rewarded with a vodka martini. It arrived, however, with an olive instead of the twist they requested. Many stars, especially of the Oscar- and Grammy-winning variety, would have sent it back, possibly even had a little hissy fit. Not Smith. They shrug it off and sip contently while we have a Zoom chat to talk about the album, which drops today along with a livestream performance from the iconic Abbey Road Studios at 4pm EST.

The album is Smith’s most varied work yet – from the poignant acapella Young to the bouncy Diamonds, which was released in September.

“I was in the studio pretending to be a really, really rich woman whose husband had left her and taken all of her diamonds and possessions in a nasty divorce,” Smith describes. “She was left in a mansion by herself, in her wedding dress, drinking wine. That’s what I was imagining when I wrote the song. This disco, Diana Ross character came out of me.”

How true to life are the lyrics?

“I only have these diamonds they’ll have to rip out of my ear to get,” they say, pointing out the two solitaires in their right lobe. On the other hangs a vintage pearl, worn at the suggestion of stylist Ben Reardon, who dressed Smith for the album art shot by fashion photographer Alasdair McLennen. “I never really liked pearls but I wear this every day,” Smith says of their new jewellery signature. “Now I want a pearl that has a deep, dark story to it.” Among the jewellery on their fingers is a gold Tiffany & Co. 1837 ring purchased in New York. “I was really sad after the breakup of my first long relationship,” Smith recalls. “I was so, so down. To cheer myself up, me and my three beautiful queer friends basically pretended we were in Sex and the City and got all dressed up, went for cocktails, walked around and then went to a vintage store and got this. I think of it as my independence ring.”

There is a lot of love angst on this album, some stemming from that breakup. And Smith laments that it’s tougher for someone who isn’t cis-gendered to find love.

“It’s hard, not because there’s a lack of people wanting to love these wonderful people. It’s hard because we’re taught not to love ourselves. So to have successful relationships can be incredibly difficult because we can self-destruct. It takes a lot of therapy, to be honest, and help, communication and practice to love.”

Smith finds listening to American author and therapist Brené Brown helps. “She speaks about vulnerability being the birthplace of joy and courage. To my queer life that really, really hit me deep.” Smith came out as non-binary in March 2019, and advises others contemplating the same to accept there are some things they can’t control. “You need to put your hands in the air and go into the moment sometimes knowing that it’s not going to be okay. That message has helped me a lot.”

Being genderqueer also resulted in a developmental delay in the romance department, Smith feels. “My ‘20s are like my teenage years when it comes to love because I was cheated from that in school.” They used fashion as a weapon to help deal during that difficult period. “From the age of 15 to 19 I would be in all female clothing and full makeup throughout school. It was my way of saying ‘f— you’ to all the bullies. And I felt incredible.”

Fame has also been a lot to cope with, Smith reveals.

“Becoming famous is one of the main traumas of my life so far,” they say. “I’ve found it such a shock to the system. I was brought up quite normally. I didn’t go to performing arts schools or anything. I left school and worked in a news agent’s in a local train station, and a bar in London. And at the age of 20 I was put into this machine that turned my life upside down in the space of eight or nine months. Everything I knew changed. Everyone treated me differently. My financial situation went from 0 to 100. I started to have to take responsibility within my family and my work circle. I didn’t have the knowledge to have that responsibility. I was a child still. And as a queer person, you’re already feeling inexperienced.”

Smith’s new reality also impacts family, friends, and co-workers, they point out. “And that’s all because I wanted it so bad. So there’s this weird mixture of guilt, pride, sadness, happiness, freedom, entrapment. All these things that you feel at the same time that you just have to work out and ride the wave.”

Leaving Smith to enjoy their martini, one last question comes to mind. Would they ever go back to dressing in that flamboyant, more feminine way?

“I think I would,” they respond. “As I get older I just want to be in caftans, diamonds and jewels.”

Photograph by Alasdair McLellan
Get the best of FASHION in your inbox Thanks for signing up!
The latest fashion, beauty and celeb news delivered right to your email #FASHIONforall Now, check your inbox to complete your subscription
We won’t ever use your email address for anything else
Want even more FASHION? Follow us on social media.