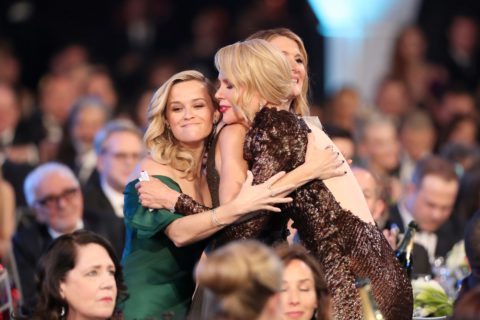 From a pair of sunglasses to a baseball cap.

They aren’t the Oscars, the Emmys or even the Golden Globes, but the Screen Actors Guild Awards are still worth a watch. The SAGs are for actors by actors, allowing artists to be celebrated by a jury of their peers and recognizing acting as a collaborative art. (Plus, they’re a great indicator of who will be taking home the BIG awards next month.) Here are the highs, the lows and the meme-worthy moments of last night’s SAG Awards. 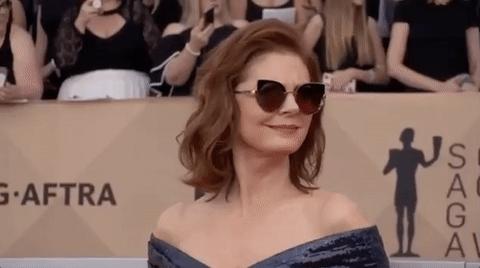 At 71, this Hollywood star is shining so bright even she has to wear shades. Can you say, SWAG awards?

At the 2018 #SAGAwards, Alison Brie addressed the allegations of sexual misconduct made against her brother-in-law, James Franco: "It remains vital that anyone that feels victimized should and does have the right to speak out and come forward." pic.twitter.com/dG5uJJVko7

On a night when she is nominated for her empowering, feminist role in GLOW, an E! reporters asks Allison Brie about the sexual misconduct allegations made against her brother-in-law, James Franco. “What we’ve always said is that it remains vital that anyone who feels victimized should and does have the right to speak out and come forward,” the actress told Giuliana Rancic, adding, “I obviously support my family and not everything that’s been reported is fully accurate, so I think we’re waiting to get all the information. But, of course, now is a time for listening and that’s what we’re all trying to do.”

Let’s ask Brie about her own achievements next time, right ladies? James Franco was at the awards, why should be sister-in-law have to answer for his alleged misconduct?

Nicole Kidman receives the Actor® for Outstanding Performance by a Female Actor in a TV Movie or Limited Series! #sagawards ? pic.twitter.com/Mxwk9Ihn2D

Another win, another epic acceptance speech from Queen Kidman. The Big Little Lies star worked until 1 a.m. the night before the event and had the flu—but that didn’t stop her from picking up her first SAG Award and preaching female empowerment. While receiving her award, Kidman addressed both sexism and ageism in the industry, making note of “how wonderful it is to that our careers today can go beyond 40 years old, because 20 years ago we were pretty washed up by this stage in our lives. That’s not the case now.”

Judi Dench is nominated for her lead acting “roll”

I want to be Best Actor in a Leading ROLL!!!! #SAGAwards pic.twitter.com/noHq4rCfZ1 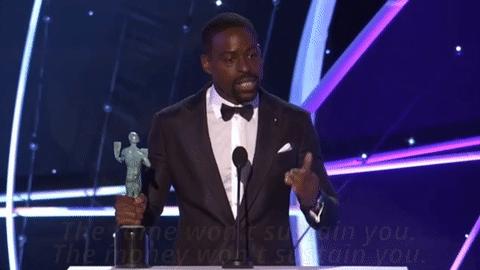 Wearing all-black aviators and a baseball cap, Morgan Freeman showed up to the ceremony to pick up his SAG Lifetime Achievement award. In the speech, the IRL voice of God—and five time Oscar nominee—took a moment to point out ‘gender-specific’ SAG Award statuettes that winners receive. “I wasn’t going to do this; I’m going to tell you what’s wrong with this statue,” he told the audience of fellow actors. “It works from the back, but from the front, it’s gender-specific. Maybe I started something.” Leave it to Morgan Freeman to point out: even Hollywood’s award show statues are sexist. 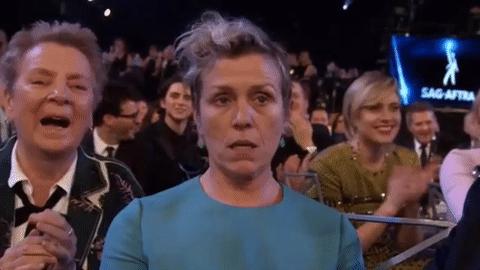 After graciously accepting her statuette, the actress pleads with voters to leave a ‘doorstop’ for younger actors.”This is really great and I thank you, I come out of the woods every few years and you invite me to the party. But there’s a lot of young ones coming up, and they need doorstops too, let’s think about that. Bye.” Does this mean McDormand is campaigning for her fiercest best-actress competitor, Saoirse Ronan, to take home the Oscar for her role in Lady Bird? Is she a fellow Timothée Chalamet stan, who just really wants the Call Me By Your Name star to get the stage time he deserves?