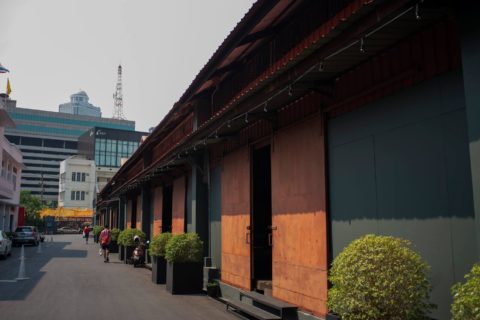 Charoenkrung was Bangkok’s first cement street and from the roadside, which is still lined with World War II-era factories, it might not seem like much has changed since it was first paved. Originally the chief financial centre of the country, the Bang Rak district fell out of favour throughout the mid-20th century as the city centre moved eastwards. But get past the industrial facades and you’ll see the neighbourhood is fostering a new lifestyle.

As trendy condos pop up and begin competing with the city centre for the new dream neighbourhood, hip cafes, restaurants and boutiques follow. But it wasn’t until hangouts like Warehouse 30 opened their doors, that the district began regaining it’s reputation as a financial powerhouse, now with a more creative twist. Billing itself as a “creative community complex,” it’s home to a screening room, bookstore, vinyl record shop, flower stall, organic market, cafe and clothing store. Warehouse 30 collects all aspects of an aspirational lifestyle under one roof–the roof of one of the aforementioned factories, specifically.

With an open floor plan, tonnes of greenery and exposed wooden beams, Warehouse 30 is the type of place you want to spend an entire afternoon. And with 6,000 square metres divided up between 8 different spaces including multiple eateries, art installations and a co-working space, not a moment would be wasted.

Considering the programming is headed up by Rungsima Kasikranund, formerly both the Editor in Chief of Thailand’s Elle Decor and the director of lifestyle content for Bangkok’s extension of Post International Media (the publishers of local imprints of Elle and Marie Claire), the aspirational lifestyle Warehouse 30 presents should come as no surprise.