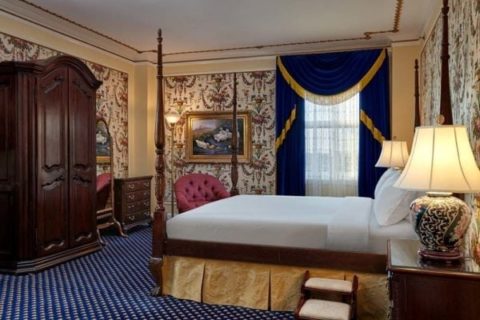 Few of us will tie the knot in a castle ceremony attended by Oprah and televised worldwide, however, when it comes to honeymooning, the royal treatment is a little more accessible.

Canada has long been favourite getaway destination for royals (Toronto, in particular, played a major role in Prince Harry and Meghan Markle’s courtship) and there are plenty of luxurious accommodations across the country fit for monarchs on the move.

From Calgary to Nova Scotia, we’ve tracked down some of the most beautiful hotels in Canada that have played host to members of the royal family over the years. With palatial suites, exquisite food and five-star service, these properties are particularly ideal for romantic staycations and honeymoons close to home.

With a stunning waterfront location, The Westin Nova Scotian has been a fixture in downtown Halifax since opening its doors in 1930. The heritage property’s executive crown suite</a> has played host to Queen Elizabeth (twice) as well as Prince Charles and the late Princess Diana.

Conveniently located in Calgary’s downtown district, The Westin Calgary has had more than a few run-ins with royals. Queen Elizabeth and Prince Philip stayed at the hotel during the Commonwealth Games in 1978, and  Prince Charles and the Princess of Wales were guests in 1983.

For your honeymoon, be sure to book one of the hotel’s executive junior suites, which offer luxurious amenities and beautiful views.

The Hotel Saskatchewan, part of Marriott’s prestigious Autograph Collection, is Regina’s most revered hotel and one of the city’s most significant historical properties with considerable experience hosting royals. A recent $12-million renovation updated much of the hotel, except one room, which has remained untouched. This room is the Royal Suite, where Queen Elizabeth and Prince Philip have famously stayed. The Hotel Saskatchewan has also welcomed the Queen Mother, Princess Margaret and Princess Anne as well as Prince Charles and Camilla Parker Bowles.

Guests are now able to book the Royal Suite for an afternoon tea experience, complete with the hotel’s freshly baked scones!

With plush rooms, five-star amenities and flawless views of Lake Ontario and the CN Tower, it’s no surprise The Ritz-Carlton Toronto has become a favourite hotel of celebs and royals alike. For a true A-list experience, upgrade to Club Level and you’ll have access to a dedicated concierge as well as a private lounge with complimentary culinary offerings and alcoholic beverages available throughout the day.

During the 2017 Invictus Games in Toronto, when Prince Harry and Meghan Markle made their first official appearance as a couple, the royal lovebirds were shacked up at the Sheraton. Featuring stylish rooms, a beautiful waterfall garden and a convenient location on Queen Street in the heart of the city, this hotel is a great place from which to explore The 6ix.