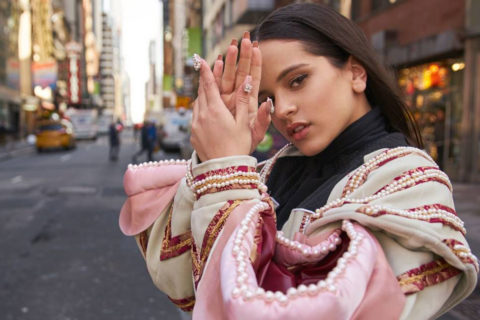 Rosalía Proves That Flamenco Could Be The Next Reggaeton

“People just want to be surprised, want to find something special, want to hear something that they’ve never heard before."

It might be time to finally cave to those relentless Spanish lesson subway ads because if the recent billboard charts are any indication, Latin music isn’t leaving the mainstream music scene anytime soon. From Drake’s collaboration with Latin superstar Bad Bunny on MIA to Cardi B’s I Like It featuring Bad Bunny and J. Balvin to that song that got a 6.1 billion views on YouTube (you know, the one you heard on every restaurant patio in the summer of 2017), it’s clear Reggaeton isn’t going anywhere. But if you’re looking to expand your Latin music taste, you’ll want to turn to EL MAL QUERER, the sophomore album of Spanish artist Rosalía offering a unique take on flamenco with elements of pop and hip hop.

“I feel like flamenco is part of this Latin music culture. It’s from Spain, but flamenco has always been connected to Latinoamérica,” says the 25-year-old Spanish artist. After performing at this year’s Lollapalooza in Argentina and Chile and winning two Latin Grammys in November for Best Alternative Song and Best Fusion/Interpretation, she’s certainly cemented herself as a Latin star. It’s the pervasiveness of Latin music across Canada and America that has brought her here to Toronto, for the last stop of her North American tour. Language, it seems, is not a barrier for the nightclub full of fans who have come to see Rosalía perform in Toronto: “Music is a language in itself and the songs have their own soul, every song has its soul,” says Rosalía. “People just want to be surprised, want to find something special, want to hear something that they’ve never heard before and that’s why artists that are connected with their roots, connected with their traditions, they are having success.”

Rosalía first performed in Canada at the 2017 Montreal Jazz Festival, before she was a global superstar with 2.6 million Instagram followers. The setting I’m watching her perform in—a nightclub slash music venue in Toronto’s east end called Rebel—is arguably a little different than a jazz festival. From where I’m standing, I can’t see the edge of the audience. The venue is packed to the back, and a smattering of conversations in different Spanish dialects fills the gaps in the house music. Beside me is a group of middle-aged Spanish women, who sporadically break into flamenco clapping rhythms and whose husbands have been relegated to beer duty, bringing them drinks on command. It’s not surprising then that when Rosalía dives into her first track of the night, PIENSO EN TU MIRÁ (CAP3.: CELOS), the crowd knows all the words.

Despite her relatively recent rise into the spotlight, she takes the stage like a seasoned performer; she jumps from demanding choreography into pitch-perfect vocals, in what feels like the same breath. “For me, it was very important to experiment with the movement and singing at the same time, and singing and dancing is so hard. When I finish the show I’m so exhausted,” she says, “it pushes me to the limit you know as a performer.”

Much like the album, the show combines a wide array of musical ideas; one moment she’s commanded the venue into a dead-silence with an emotionally tearful acapella (have you ever been inside a nightclub and heard room tone?), and the next moment the crowd is jumping around to an energetic trap beat. “I think I have a lot of different moods, a lot of different moments, it’s – como un viaje ­– like a journey,” she says. “It feels so different, I think, from the record because I’m singing for real. There’s no playback at all in the show and you can feel it.” Her voice is tremendously powerful, and she knows it. Not many artists would have the confidence to come out to a crowd yelling ‘encore’ and perform an acapella, the second of the night.

For now, Canadians will have to settle for the small taste of her talent: she’s headed back to Europe this summer, where she’ll play shows for similarly enthusiastic audiences in various cities. Undoubtedly, Rosalía will be back to North America soon as an even bigger celebrity. With the long list of industry encounters she’s had over the course of her tour—including Frank Ocean, who attended her New York show (“I admire him so much,” she gushes in a sing-song-y kind of way)—it would be surprising if her phone isn’t blowing up requesting collaborations in the vein of James Blake’s Barefoot in the Park. “I’m very focused on the performances, but every time I can, I go to the studio,” she says. “I keep composing and I keep recording ideas and at some point, maybe I’ll give shape to these ideas in a conceptual project. But for now I’m just having fun, you know?”

Photo credit Arale Reartes
Get the best of FASHION in your inbox Thanks for signing up!
The latest fashion, beauty and celeb news delivered right to your email #FASHIONforall Now, check your inbox to complete your subscription
We won’t ever use your email address for anything else
Want even more FASHION? Follow us on social media.