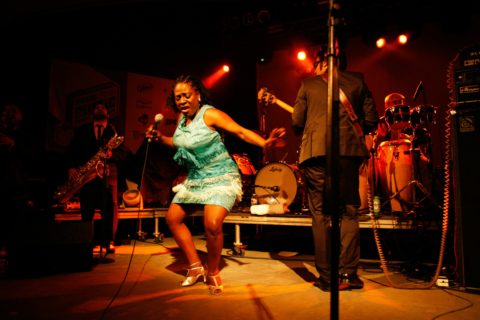 Few forces in music have been as tenacious and audacious as Sharon Jones. The soul singer, who was born in South Carolina and raised in Brooklyn, reportedly suffered a stroke while watching the U.S. presidential election results (she was a Clinton supporter) on November 8, 2016. She was in the midst of a long-standing battle with pancreatic cancer but as her many interviews in the documentary film, Miss Sharon Jones! suggest, she fought the fates so she could share her talent and perform.

Although Jones had a late start in the music game (she released her first album Dap Dippin’ with Sharon Jones and the Dap-Kings at the age of 45), Jones more than made up for her late blooming ways as soon as she got her big break. Before she was discovered, she worked as an armoured car attendant and a prison guard at Rikers Island in New York City, often singing Whitney Houston ballads to lonely inmates. At the age of 40, Jones was ceremoniously tapped to sing backup on a session with soul singer Lee Fields. That experience led her to a full-on signing with the Dap-Kings, a band who would go on to shape Amy Winehouse’s sound.

In an unpublished interview with FASHION’s features editor, Elio Iannacci, Sharon Jones opened up on her life and art with the kind of intensity and energy she often reflected in her many sold-out shows.

Tell me about your first memory singing live. Do you remember how you felt?
It was singing “Silent Night” at church. They cast me as an angel. I was a little girl, just about 7 years old. It felt so goooood! I felt like I was half a person before I sung anything before. When I started singing that carol, I remember feeling like I was completely me for once.

You used to be a corrections officer at Rikers jail. Any skills you used in that job for your job on stage?
You learn how not to show fear. You don’t have show people when something is bothering you. The show must always go on. When you hit the stage or you are on the job, you got to hide the fact that you have bad news. On New Year’s Eve of 2007, I had found out my brother passed away. That night, I had to sing and do a couple of shows. Then I had to come home three days later to bury my brother. I gave it my best anyway and I belted those notes as hard as I could. For him. For them. For me.

So many lyrics in soul music are about living in the past and reflecting on what happened… is that something you try and stay away from in real life?
I don’t think you need to sit around thinking about your past. Some things that happen help you grow. Bad times break you down or make you stronger. I got stronger. They told me I didn’t have the look or I didn’t have what it takes.

I can’t believe David Byrne once said you were too old to sing with him when you auditioned as a backup singer for his tour.
Don’t you worry, I got back at him (laughs). When he called me to sing “Dancin’ Together” on his [Here Lies Love] twenty years later—after I got a name for myself—I felt I had to tell him. But I waited until after I did the recording! I needed to get paid. He laughed too. He said “oh did I do that?” and I said, “yeah!” If I met him back then, we would have butt heads anyway.

The industry gives a lot of respect to younger acts like Beyoncé and Mary J Blige. Why do you think they are so scared to include you?
Because they know if I get up on the stage with them, I will tear it down with my voice. They don’t want to give me the spot because I am from an independent record company. All I ask is why? Things are going to change. They can’t hold me down. God has gifted me but no matter how hard they try and keep me down, they can’t.

How have people tried to keep you down?
They tried to keep us down by recreating the retro soul movement—with these little kids like Amy Winehouse, Duffy and Mark Ronson—but I am the real deal honey. They got the old R&B and soul from us and they know it!

Do you feel you are turning into celebrity?
Oh yeah honey, now its happening. Here I am between taping the Jimmy Fallon show and I had to come in during my 3 hour break and come to the doctor and run back up there. My voice sounds better than ever. I’m keeping it checked now by Doctors all the time. I never had a vocal coach.

When you are having a rough day, which heroes do you think of?
Aretha, James Brown, Patti Labelle, The Supremes and Otis Redding. All the soul sounds of the ’60s. I met Mr. Brown just before he passed away and he looked at my face and said “God Bless You Baby” If he was alive, we would definitely do something together.

Most challenging song you’ve ever performed?
When I used to sing Whitney Houston’s “Saving All My Love” with all those house bands I used to have to tour with before I was with the Dap-Kings. It’s challenging to sing soprano because I’m an alto.

What comes to mind when you think of the most emotional song you have sung on stage?
“She Ain’t A Child” — it’s a true story and a testimony. Its about a girl who stood up to her abusive parents.

True or false: You turned Lou Reed down to do Denzel Washington’s movie, The Great Debaters.
It was great. When I turned Lou’s tour down, I turned down more money than you could think of but it was a matter of principle. A movie is a movie! Denzel is Denzel!

There are rumours out there that did a secret James Bond song that never got released. True or false?
I wanted to! We were over in Europe when they were trying to get Amy Winehouse to record it. They went with Alicia Keys instead. I don’t get my hopes up high because nothing comes easy for me. That’s why one of the titles of my discs is I Learned The Hard Way. I learned that when they tell me things, not to get excited. I keep my mouth shut until I get the ticket and I am on my way to do it—then, I’ll talk about it. Other than that, my life has a lot of let downs.

Were you ever angry when you heard Amy Winehouse’s Back To Black?
I never got mad at Amy! I just got irritated when people started saying that I was jumping on her bandwagon. For one thing, I don’t ride on anybody’s wagon but my own. They came to us! They came to my Dap-Kings. They jumped on our wagon. She has her style and had a great voice just don’t compare her or anyone to me. I don’t even compare me to me. I’m not trying to take nothin’ from Amy. I’m praying for her that she can get out here and sing again. I have nothing bad to say about her. When I saw her in London and went to hug her, her arms were so thin. I cried, I said, “Baby what are you doing? Get yourself together.” I give her love.

Like so many women in the music industry, many people told you that you weren’t good enough. What were some of the most painful criticisms that you heard?
They told me I was too old, too black and too short to be in the business but that did not take a toll on my confidence. When I heard James Brown sing “Say It Loud (I’m Black and I’m Proud) – it affected me. He made me look in the mirror differently and love myself. I used to feel bad about being all the above. It made me walk away from all the good paying jobs that I had that weren’t necessarily right for me and go out with the band and take a chance and make 50 or 75 dollars a night.

How do you keep so positive?
The men in my life have come and gone. I didn’t get married or have children because I wanted to make a career for myself. But you can’t say I wish I had or I wish I could have. All I can do is look to what’s going on now and fight hard to be better and do better.