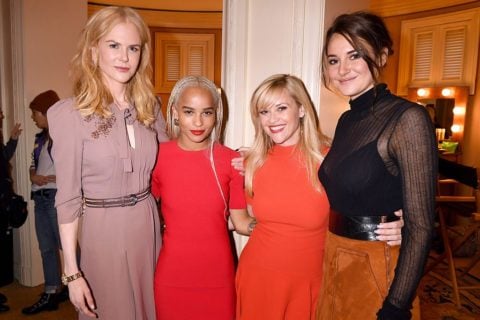 An upcoming HBO limited series is about to challenge Hollywood’s typical roles for women. Big Little Lies, premiering February 19, stars Reese Witherspoon and Nicole Kidman—and they have a lot to say.

It all started when Witherspoon made a move in 2016 to begin producing her own films, refusing to play the part of the “ girlfriend in a dumb comedy.” After she was sent an “awful” and sexist script that showed the female part as less complex and less interesting than the male role, she decided enough was enough. Hence this new female-empowering part she’s tackling alongside Kidman.

Big Little Lies is an American comedy-drama mini-series that, at a glance, is about women who go to war with each other. The show, based on the novel by Liane Moriarty, focuses on a group of mothers who fight alongside one another while their lives and friendships intersect.

Witherspoon and Kidman spoke about the series, alongside Zoe Kravitz and Shailene Woodley at the Television Critics Association (TCA) Winter Press Tour panel.

“Reading the novel for the first time, I saw myself at different stages of motherhood through my life,” said Witherspoon. “It explores so many aspects that are relatable to the lives of women; it wasn’t about them being good or bad—they showed every spectrum and every color of women’s lives. It presented a unique opportunity to have so many incredible parts for women in one piece of material.”

Witherspoon explained to the audience that she had grown weary of “Smurfette Syndrome” when she was working on films, meaning she was the only woman among many men. She wanted to bring complex female roles to television because she had had enough of the incredibly talented women playing wives and girlfriends with “thankless parts.”

“I’m passionate because things have to change. We have to start seeing women as they really are in film. And not just in a movie theatre with a tiny budget.”

Along with Jean-Marc Vallée and David E. Kelly, the two Academy award-winning actresses are executive producers of the show. Witherspoon, who has already worked on movies like Gone Girl and Wild, and Kidman, who did The Family Fang, are no strangers to the work behind movie production.

“As much as there is conflict, the piece is about women supporting each other,” said Kidman.

“I love that it’s about women coming together and making something happen very quickly,” Witherspoon added.

The show allows for five great female roles, an oddity in regular television. Starring Kidman, Witherspoon, Shailene Woodley, Zoe Kravitz and others, the adaptation is told from the perspective of different mothers. As relationships develop and issues are battled, murder mystery begins to seep into the storyline. If you’re looking for a new show to get hooked on, this might fit the part.

“This piece for me was the story of women that I know, and it was a way which we could go to other women with five great roles that were complicated and deserve to be told. It’s very rare to find five roles in one piece that we’d all jump at a chance to play,” said Kidman.

Let’s hope that projects like this will bring gender equality on its way to Hollywood.