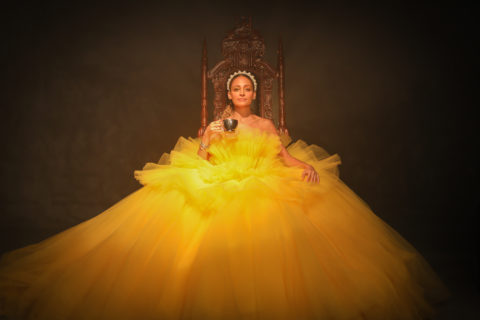 Nicole Richie, Chrissy Teigen, Liam Hemsworth, Lena Waithe and a host of other big names feature on the initial lineup.

At any other moment in time, we might have groaned about yet another streaming service to sign up for. But with self-isolation in full effect across many countries around the world, this might just be the perfect time for a new platform to debut, with a whole slate of original scripted and unscripted content. Launching April 6, Quibi shows offer “quick bites” of TV—each episode clocks in between seven and 10 minutes, and is available on mobile only.

From Chrissy Teigen to Liam Hemsworth to Nicole Richie to Lena Waithe, Quibi’s bite-sized appeal has attracted a slew of celebrities for its initial lineup of content. Dramas, comedies, documentary series and reality competitions have all found a home on the platform, which is offering a 90-day free trial to those who sign up at Quibi.com before April 20. The Quibi app is now available for pre-order in the Apple App Store and Google Play Store, and costs $4.99 with ads and $7.99 without ads. Read on for the shows we’re most excited to see, all of which drop on April 6.

This Judge Judy-esque show features Chrissy Teigen taking on the role of judge in small claims court. “Have you been injured on the job, even if was your own fault? Did your roommate steal your clothes and try to sell them back to you? Did your ex borrow your phone and return it with a cracked screen?” she says in the show’s teaser. “You may be entitled to a cash settlement. Call this number and get the justice you deserve.” Her mother, Vilailuck “Pepper Thai” Teigen, maintains order in the court as the bailiff. A new episode drops daily and aside from the laughs, each new day in court delivers a bold statement necklace worn by Teigen over her black robes.

You Ain’t Got These

In an age in which sneakers have become a status symbol, Queen & Slim writer Lena Waithe explores social issues through the lens of sneaker culture with guests like Billie Jean King, Hasan Minhaj, and Jemele Hill. “Sneakers are the only economic good that unites the richest of the rich and the poorest of the poor,” says Minhaj in the series trailer. “The dude who’s bagging your groceries is wearing a pair of Jordan 3s White Cement… and so is Jay-Z.”

Executive produced by Jennifer Lopez, this reality series features some very famous faces—including Kristen Bell, Nick Jonas, Yara Shahidi, Karlie Kloss and Lopez herself—giving thanks (by way of $100,000 in cash) to someone who made a profound impact on their lives. Those unsuspecting individuals will then keep the chain of kindness going by paying half of that amount forward to someone else. Across ten episodes, $1,000,000 will be put in the hands of everyday people.

Starring and executive produced by Nicole Richie, this show offers a satirical look at the world of wellness and socially-conscious pop culture. As Nikki Fre$h, Richie’s goal is to create a new brand of “conscious trap” music for “teachers, rabbis, Virgos, but mostly moms and gays,” and to also care for the planet’s “plants, bees and interspecies.” According to the official release, “Nikki Fre$h will interact with real life seekers and consciousness experts to learn ways to better serve our bodies and our planet — while comedically exaggerating those solutions to the edge of sanity.”

This eight-episode series takes a peek behind curtain as drag queen Sasha Velour adapts her critically-acclaimed Brooklyn drag revue into a full-on stage production—and the biggest drag showcase of her life. “Part behind-the-scenes documentary, part lip-sync spectacular,” each episode will focus on one performer from Velour’s ensemble as they prep for their individual showcases.

Liam Hemsworth plays a terminally-ill man desperate to provide some funds to support his pregnant wife before his death. So he accepts an offer—extended by the deliciously evil Christoph Waltz—to participate in a deadly real-life “hunt to kill” in which he’s the prey. The series also stars Sarah Gadon, Billy Burke and Zach Cherry.

Sophie Turner’s first post-Game of Thrones project tells the story of two plane crash survivors forced to “combat the elements and their personal demons” when their plane crashes on a remote mountain, killing everyone else on board. The series co-stars Corey Hawkins (Straight Outta Compton) and is based on a critically acclaimed novel by the same name.

“Ask yourself one question: why do they call it the Animal Kingdom, when it’s clearly run by queens?” asks narrator Reese Witherspoon. This documentary nature series explores the fabulous females of the animal world, from ant queens to speedy cheetahs, who call the shots in the wild and sit at the top of the social hierarchy. From the award-winning BBC Studios Natural History Unit, this series delivers the most dramatic natural history stories from a fresh female perspective.

Although a release date hasn’t yet been set for the following, these are shows we’re keeping an eye out for.

Starring and executive produced by supermodel Tyra Banks, this docuseries “aims to expand and redefine the definition of beauty” by exploring and challenging traditional beauty standards throughout the world.

Crazy Rich Asians author Kevin Kwan teams up with acclaimed filmmaker Eddie Schmidt for this look into “the elite families behind the world’s most exclusive luxury labels.” While these brands have kept their businesses in the family for generations, the show chooses to shine a light on the the millennial members of the family guiding the brands toward the future.

Demi Lovato sits down for “candid, unfiltered conversations” with a slate of celebrity and expert guests, covering everything from body positivity and gender identity to activism and wellness over the course of the 10-episode series.