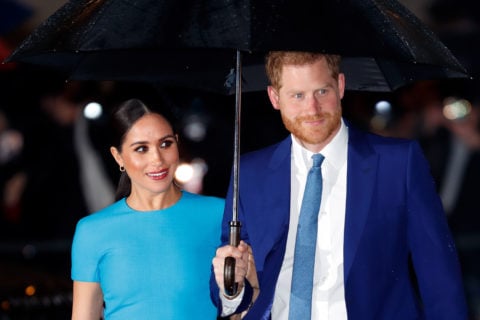 It's an unprecedented time for Britain's longest-standing institution since being called out by Meghan and Harry during their Oprah interview. What will happen next?

There’s no denying that Meghan Markle and Prince Harry have shaken up the British royal family since they first got together in 2016 and it was widely believed that their relationship was going to modernize the monarchy. In reality, it seems like the union exposed many deep-rooted and systemic issues in one of the longest-standing institutions of our time. This is especially true of Meghan and Harry’s revealing interview with Oprah Winfrey on March 7.

And a lot has gone down since March 7. With Queen Elizabeth II and senior members of the royal family making unprecedented statements about racism to the media, there’s no telling exactly what will happen next now that the throne has been rocked.

Approximately 17.1 million people tuned in to watch the highly anticipated interview with Meghan, Harry and Oprah, compared to nearly 30 million who tuned in for their wedding in 2018.

Much was packed into the two-hour episode, including Meghan recounting her first meeting with the Queen, the revelation about her and Harry’s secret backyard wedding days prior to the big televised ceremony, the real story behind Meghan’s reported rift with Kate Middleton and heartbreaking details about the duchess’s mental health struggles, including her battle with suicidal ideation.

Harry and Meghan revealed that they asked the palace for help and received none. Before the birth of their son Archie, they were told he wouldn’t receive a royal title or security protection. Meghan and Harry revealed that there were even “concerns” about how dark Archie’s skin tone might be. They refused to reveal who made those comments.

The couple shared that they were financially cut off from the royal family in early 2020. Harry, whose relationships Princes Charles and William are strained, revealed they’d been living off of his inheritance from Princess Diana.

Amongst all the bad news, there was some good — the couple is expecting baby number two, a little girl, this summer.

“Having any child, any one or two would have been amazing, but to have a boy and then a girl,” Harry said. “Now we’ve got our family and we’ve got four of us.”

March 8: Piers Morgan accuses Meghan Markle of lying in her interview with Oprah

During the two-hour interview, Meghan expressed suffering from suicidal ideation while pregnant with their son Archie and dealing with the relentless abuse from the U.K. tabloids and a lack of support from the royal family.

Morgan dismissed her claims of suicidal thoughts and racism on Good Morning Britain, saying: “I don’t believe a word she says, Meghan Markle. I wouldn’t believe her if she read me a weather report.” His co-host, Susanna Reid, responded: “That’s a pathetic reaction to someone who has expressed those thoughts.”

‘I’m sickened by what I’ve had to watch.’

‘It’s a 2 hour trash-athon of everything the Queen has worked so hard for, while her husband is in hospital.'@piersmorgan starts the show with his reaction to the Harry and Meghan interview.

Piers Morgan took over headlines after he stormed off the set of Good Morning Britain. He’d been called out by his colleague Alex Beresford for relentlessly trashing Meghan on the show, including being taken to task over his accusation the day before that the duchess was lying in her Oprah interview.

It was later announced that Morgan would be leaving the show, after ITV received more than 41,000 complaints from the public about his accusations.

So @alexberesfordTV defends Meghan on @gmb and criticises @piersmorgan for what he’d said about Meghan’s mental health.
Piers walks off the set.
Surely Piers knows if you give it, you gotta be able to take it?pic.twitter.com/gmoNjMxiQy

“The whole family is saddened to learn the full extent of how challenging the last few years have been for Harry and Meghan,” it reads. “The issues raised, particularly that of race, are concerning. While some recollections may vary, they are taken very seriously and will be addressed by the family privately.”

“Harry, Meghan and Archie will always be much loved family members.”

Later on, Thomas Markle appeared on Good Morning Britain, claiming that he felt unprotected by the royal family as he was being hounded by the press at his home in Rosarita, Mexico.

“My oldest daughter was contacted by a man named Jeff Rayner who was a photographer, who said, ‘If you can convince your dad, we can make him look good,'” Thomas explained on the show about why he chose to pose for staged paparazzi photos. He later admitted: “I wish I hadn’t done the whole thing.”

“I’ve yet to hear from them. I would love to hear from them,” Meghan’s estranged father said when asked why he continued to take part in stories about his daughter. “They’re not talking to me. When they decide to talk to me, I’ll stop talking to the press.”

The Duchess of Sussex reportedly filed a formal complaint with ITV after the Good Morning Britain host said he didn’t believe anything Meghan said in her Oprah interview. It’s believed that she made the complaint because of the impact his comments could have on those suffering with their own mental health struggles.

In a since-deleted tweet, per CNN, Morgan later wrote: “I’ve had time to reflect on this opinion, and I still don’t [believe her]. If you did, OK. Freedom of speech is a hill I’m happy to die on. Thanks for all the love, the hate. I’m off to spend more time with my opinions.”

That same day, Sharon Osbourne came to his defence on The Talk, saying: “Did I like everything he said? Did I agree with what he said? No. Because it’s his opinion. It’s not my opinion … I support him for his freedom of speech, and he’s my friend.”

. @piersmorgan I am with you. I stand by you. People forget that you’re paid for your opinion and that you’re just speaking your truth.

Prince William and Kate Middleton visited a school in east London for their first outing since Meghan and Harry’s interview with Oprah. As the two were leaving the school grounds, Sky News correspondent Inzamam Rashid asked if William had spoken to Harry, and if the royal family is racist.

“I haven’t spoken to him yet but I will do,” William says in video footage shared on Twitter by royal reporter Omid Scobie. “We’re very much not a racist family.”

“We are very much not a racist family,” Prince William told reporters during a visit to a school in Stratford, London.

When asked if he had spoken to Prince Harry after the Oprah interview, he added, “No, I haven’t spoken to him yet, but I will do.”pic.twitter.com/MjTOeH7u6Z

March 12: The Queen makes her first public appearance since the Oprah interview

In celebration of World Science Week, Queen Elizabeth II chatted with Dr. Maggie Aderin-Pocock and four others about the day she met Russian cosmonaut Yuri Gagarin, the first human to travel to space, in 1961. She even cracked a joke. When Aderin-Pocock asked her what Gagarin was like, she responded: “Russian. He didn’t speak English. No, no, he was fascinating.”

? Her Majesty recalls meeting the first human to travel into space, Russian cosmonaut Yuri Gagarin, in 1961.

Dr Maggie Aderin-Pocock, who hosted the Science Week session, told The Queen how Gagarin inspired her to pursue a career in space science. pic.twitter.com/IyX5H4wT5n