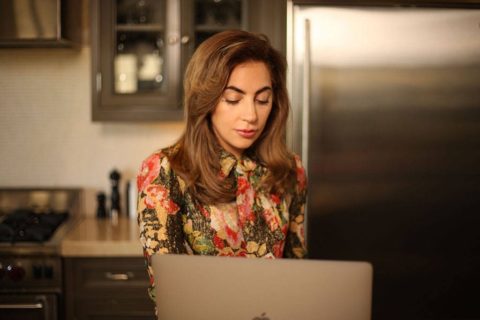 The Duke of Cambridge and @LadyGaga join forces to encourage more people to speak openly about their mental health #OKtosay pic.twitter.com/kCuQyS3Svn

The royals are continuing with their commitment to end the stigma surrounding mental health, and now they’ve brought Lady Gaga on board to join the conversation.

On Tuesday, Kensington Palace released a video in which Mother Monster discusses her own personal struggle with mental illness in a FaceTime chat with Prince William. The convo is part of Prince William, Prince Harry and Kate Middleton’s Heads Together #oktosay film series, which sees celebrities opening up about their experiences with mental health in an attempt to end the stigma on speaking out.

In the short clip, the Duke of Cambridge praises Gaga for the open letter she penned in late 2016 in which she described her battle with PTSD as a “daily effort.” He then asks her how talking about her struggle made her feel.

“It made me very nervous at first,” the songstress told the royal. “For me, waking up every day and feeling sad and going on stage is something that is very hard to describe. There’s a lot of shame attached to mental illness. You feel like something’s wrong with you.”

She continued, “In my life, I go, ‘Oh my goodness, look at all these beautiful, wonderful things that I have. I should be so happy,’ but you can’t help it if, in the morning when you wake up, you are so tired, you are so sad, you are so full of anxiety and the shakes that you can barely think.”

Despite the hardships, Gaga tells Will “the best thing that could come out of my mental illness was to share it with other people.”

“I feel like we are not hiding anymore, we’re starting to talk, and that’s what we need to do really,” she said.

The prince agreed, saying, “It’s time that everyone speaks up and really feels very normal about mental health. It’s the same as physical health.”

At the end of the clip, the father of two invited the pop star to meet up and continue the conversation during her visit to the U.K. in October. Gaga, of course, graciously accepted, adding, “We have to make the strongest, most relentless attempt we can to normalize mental health issues so that people feel like they can come forward.”