A collective sense of grief made its way through the airwaves today as news spread that Prince, one of the most influential artists of all time, had died. As a product of the ’90s, I was immediately brought back to my first introduction to The Purple One in the form of a chilling rendition of his classic hit “When Doves Cry” in the Danes-DiCaprio retelling of Romeo and Juliet. A movie and soundtrack that would play on repeat in the bedrooms of teenage girls across North America and beyond. Never before had a classic story been told in such a young and modern way, with the sweaty backdrop of a modern Verona causing us impressionable youths to pine for a love that was truly lethal.

Having so recently lost the equally idolized David Bowie, it’s hard to think about how the future of music will ever compare to the generations past. Prince was known for leaving his heart and soul on the stage when he performed, often playing for three or four hours at a time, giving everything he had to his adoring fans each time. Lest we forget the mind-blowing 2004 Grammys performance alongside Beyoncé that would bring the ’80s icon to a brand-new generation of music lovers. As we look to the stylish icons of music today–Gaga, Rihanna and even Kanye–it seems impossible that Prince and Bowie could ever be replaced.

The winner of seven Grammys, a Golden Globe and a damn Academy Award was more than just a performer; he was a veritable style magnate. Despite being considered the music industry’s ultimate ladies man of the ’70s and ’80s, his flamboyant style pushed the boundaries of the gender binary, proving that there was more to male sexuality than simple machismo.

His ability to pull off a ruffled collar was rivalled only by the likes of Mozart in the opulent, Oscar-winning spectacular Amadeus or a Sofia Coppola period piece. He could rock a pantsuit like no other, with separates in every fabric and colour imaginable. His style was entirely undefinable, marrying influences from disco, hip-hop, historical costume and high fashion to create something that was truly unique.

Much like the dearly departed Bowie, Prince inspired countless generations to feel empowered by their differences, to push the boundaries of cultural norms and let their freak flag fly high. To this day, you can see the influence his style has had on so many of our favourite stars, from Lenny Kravitz and D’Angelo to Andre 3000 and Janelle Monae.

So, as we say goodbye to one of the 20th century’s most-loved royals, we take a look back at some of Prince’s most memorable looks. Click through below and prepare to be wowed. 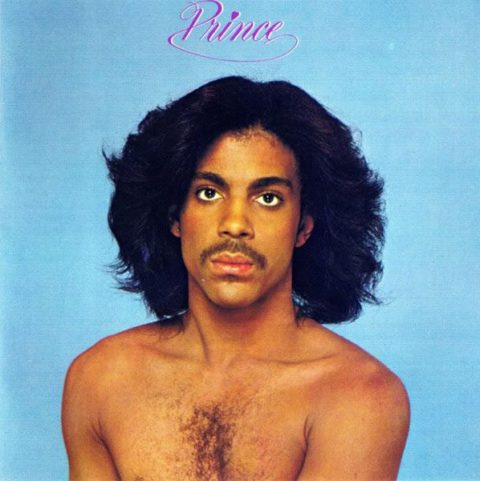 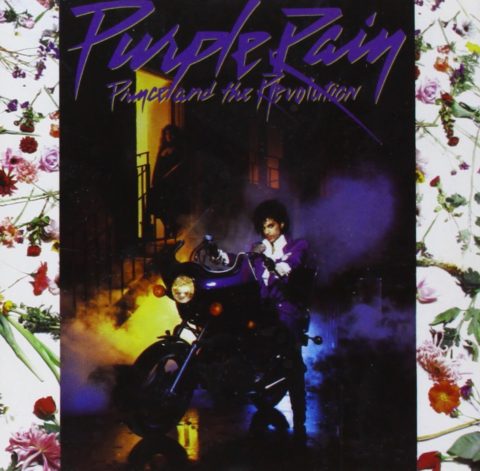 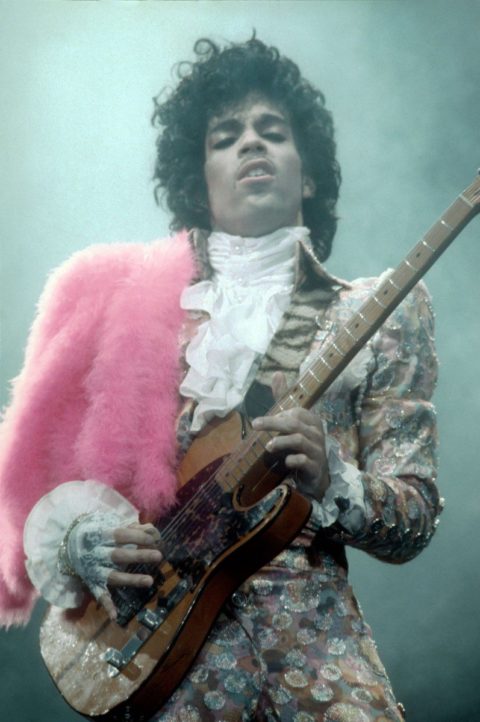 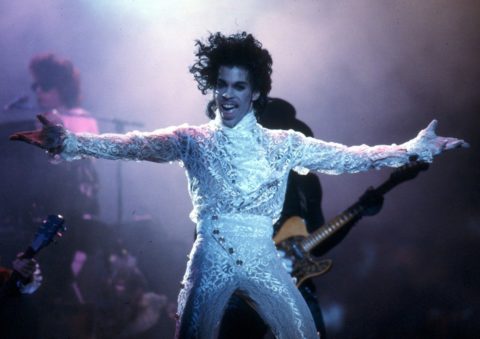 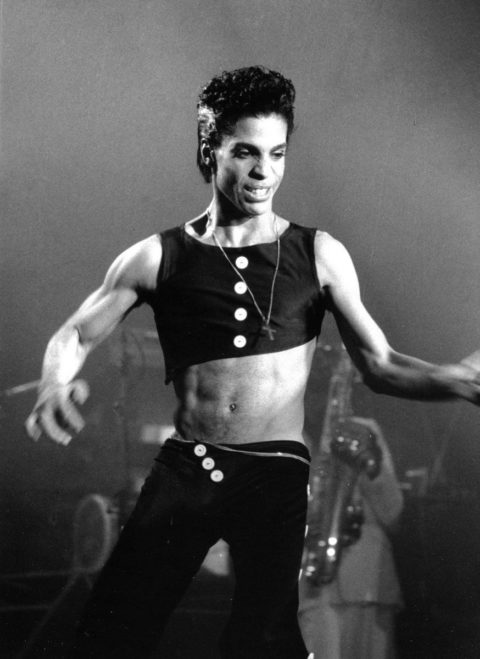 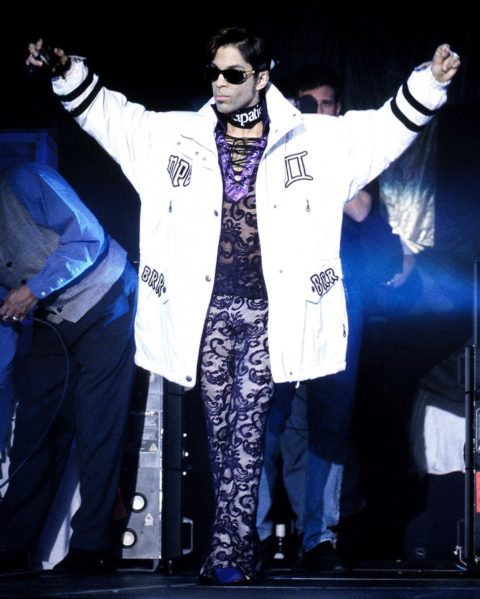 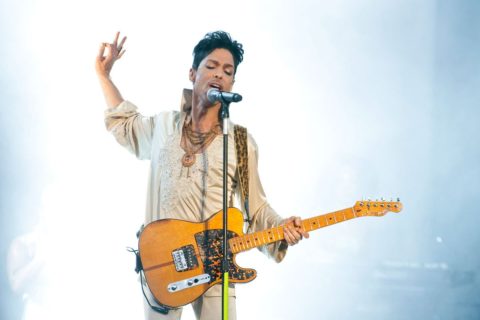 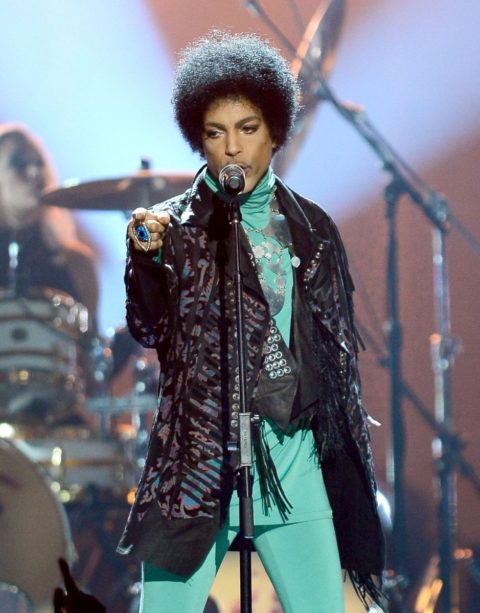 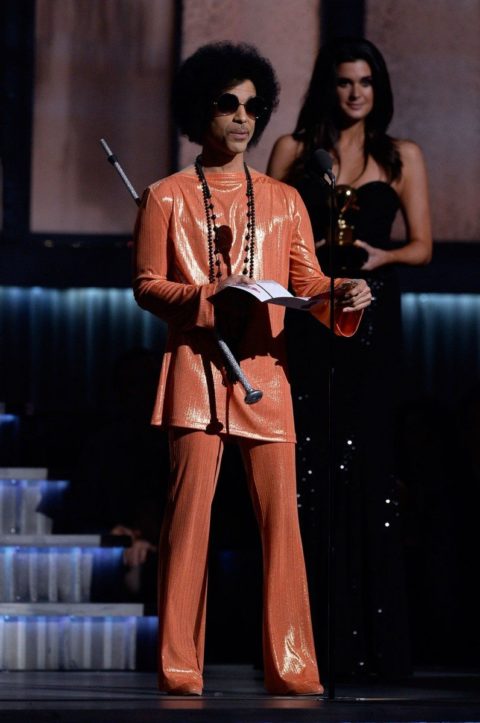 I suppose this particular look doesn’t quite fall into the category of “wardrobe” per se. But look at this man! The blown-out Farrah Fawcett hair, the manicured brows and mustache, the tiny patch of chest hair…those collar bones!! This image has clearly been the catalyst of many a sexual awakening throughout the decades, and I may or may not include myself in that category.

Prince would stake his claim as a true icon with the release of his 6th studio album, Purple Rain. Even more influential than the chart-topping singles, Purple Rain saw the debut of his fresh new look—one that would go down in history as the Prince look. With a mop of luscious curls, the singer officially embraced his now-signature colour, donning meticulously tailored matching purple sets with his trademark ruffled collar shirt, which would slowly get unbuttoned more and more throughout his sweat-inducing performances. Who knew a man in frills could be such a turn on?

And so begins a decade or so of baroque-inspired pantsuits. Never one to shy away from the ornate, this brocade number, paired with lace fingerless gloves, a Pepto-pink fur shawl and complementary snarl is the ultimate example of the fearless attitude that inspired generations of misfits and outcasts.

Head-to-toe lace. Head. To. Toe. Lace. Is that a onesie? Are they separates? Who knows, but one thing is for sure: Few men can pull off a full body of white lace, ruffles and gold detailing like he did. With that come-hither stance, Prince was clearly “work”-ing it long before Rihanna.

Prince’s unforgiving and untamable sexuality was infused into every aspect of his performance style. And as you can see from this mid-’80s look, that translated quite literally into his wardrobe. Inspired by the likes of Bob Fosse, Prince began sporting clothes that were much more style than function, opting for crop-tops, high-waisted bell-bottoms and often bodysuits and garters that were more Rocky Horror than Billboard 100.

Much like his musical style, Prince’s wardrobe pushed the boundaries of genre. In this 1997 performance, Prince, again, rocks a lace unitard, this time in his signature shade of purple with an oversized hip-hop-inspired jacket and printed choker (yes, choker). An outfit reminiscent of a Li’l Kim/Missy Elliot mash-up. The mid-’90s also saw the end of Prince’s luscious curls, as he opted for a more decade-appropriate slick look with thin sideburns and a clean-shaven face. Bye-bye, mustache, you’ll be sorely missed.

Flash forward to 2011 and Prince is looking as though he’s been preserved in a cryogenic chamber. Then 50 years old, the singer continued to wow audiences across the globe with his powerful performances, though his wardrobe became a bit less predictable. While the opulent suits would still make an appearance from time to time, Prince debuted a more streamlined look, with an embroidered cream collared shirt and matching pants, and chains that could rival Flavor Flav’ and Barry Gibb combined.

In a surprise performance at the 2013 Billboard Music Awards, Prince paid homage to his own history, with a classic afro and Hendrix-esque fringed jacket paired with a matching seafoam tunic and wide-legged nylon pants. In an age when most performers are showing up to events like these in designer gowns that they can barely move in, Prince reminds us all what it means to be a real star, from head-to-toe.

In one of his last public appearances, Prince presented at the 2015 Grammy Awards in a burnt orange leather tunic and matching bell bottoms, beaded chains and round glasses reminiscent of his early days. The world watched in awe as the icon presented Album of the Year to Beck, unaware that this would be the last time we saw him speak. His swagger still intact, Prince would not disappoint in an outfit that paid homage to the era that made him a megastar.

Photography by Neil Lupin/Redferns
Get the best of FASHION in your inbox Thanks for signing up!
The latest fashion, beauty and celeb news delivered right to your email #FASHIONforall Now, check your inbox to complete your subscription
We won’t ever use your email address for anything else
Want even more FASHION? Follow us on social media.