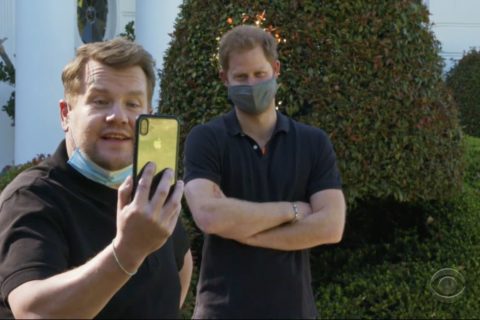 Plus, how he knew Meghan Markle was the one.

Prince Harry has made his American late-night TV debut.

The Duke of Sussex joined fellow Brit James Corden on The Late Late Show for a hilarious 17-minute long segment that aired February 25. During the interview, the host showed a relaxed Harry around L.A. from the top of an open-air double-decker bus — the royal’s first time riding in one. Corden — who attended Harry’s wedding to Meghan Markle back in 2018 — took the prince to see the house from The Fresh Prince of Bel-Air (yes, Harry knows the theme song!) and even competed against him in an obstacle course. Naturally, the pair also enjoyed a cup of tea while hitting on a range of topics from fatherhood to leaving the royal family. Here’s everything we learned from their chat.

While visiting the Fresh Prince house, Corden tries to convince Harry to make an offer to buy the home. (Because then he’d be a prince living in the Fresh Prince house, get it?) When that fails, the comedian nabs the duke’s phone to give Meghan a call to attempt to convince her that it would be a logical investment. The Duchess of Sussex laughs the scheme off and then sweetly reveals her very British nickname for Harry, asking: “Haz, how’s your tour of L.A. going?” Corden, of course, picks up on the name and asks Harry when people started calling him “Haz.” Harry responds, laughing, “You’re not my wife.”

Harry knew his relationship with Meghan was different almost right away

Corden asked Harry how he knew Meghan was “the one,” and the prince’s answer was pretty sweet. “[By] the second date, I was starting to think this was pretty special,” he says. “We were just so comfortable in each other’s company.” Harry went on to explain that it can be pretty weird dating in the royal family — all of their initial dates were done in private at home, either staying in for dinner, watching TV or just talking. “Everything was done back to front with us,” the royal says. “We got to spent an enormous amount of time with just the two of us, rather than going to friends’ houses or out to dinner. There were no distractions, and that was great. It was an amazing thing. We went from zero to 60 in the first two months.”

Now, the Sussexes nights in look a little different. The parents will give their son, Archie, his tea and a bath, and read to him before putting him to bed. Then, they’ll make dinner or order food and settle in for a night of TV — Harry says they usually tune in to Jeopardy or log onto Netflix.

Prince Harry has no issue with The Crown

“[The Crown] doesn’t pretend to be news. It’s fictional,” Harry says, explaining he has a bigger problem with inaccurate tabloid stories written that pass themselves off as fact because they appear in news outlets. “But it is loosely based on the truth. Of course, it’s not strictly accurate. It does give a rough idea about that lifestyle, that pressure of putting duty and service above family and everything else and what can come from that. I’m way more comfortable with The Crown than I am seeing the stories written about my family, or my wife, or myself.”

As for who Harry would like to see portray him on the hit Netflix drama? Homeland and Billions star Damian Lewis — although the royal amusingly gets the actor’s name wrong at first and Corden has to correct him.

Harry loves being a father to Archie

The prince talks about his first child — who’s turning two this May — with Meghan with a big smile on his face. “He’s hysterical and has the most amazing personality,” he says. He reveals that baby Archie is even stringing together short sentences and singing songs. The proud dad also revealed his son’s first word: crocodile.

“My grandmother asked us what Archie wanted for Christmas and Meg said a waffle maker,” Harry says, laughing. And the Queen actually sent them one! “Archie loves it. He wakes up in the morning and just goes, ‘Waffle?'”

Queen Elizabeth II and Prince Philip both know how to Zoom

Harry revealed that they’ve been using Zoom to keep in touch with family back in the U.K. and that both his grandparents know how to use the app. They even watch Archie running around their California home. But, like, the rest of us, Prince Philip also doesn’t know how to elegantly end a Zoom call — Harry says he just closes the laptop in the middle of saying goodbye.

Harry stepped back from royal duties for his mental health

“It was never walking away — it was stepping back rather than stepping down,” Harry explains of his and Meghan’s decision to not be working members of the royal family. “It was a really difficult environment, as I think a lot of people saw. We all know what the British press can be like. It was destroying my mental health. I was like, ‘This is so toxic.’ So I did what any husband and father would do and was like, ‘I need to get my family out of here.’ As far as I’m concerned, whatever decisions are made on that side, I will never walk away. I will always be contributing.”

Life in L.A. will surely be different for Harry and Meghan, Corden points out to the royal. But what exactly will that look like? “I have no idea,” Harry says. “It’ll be a slightly different version of what we were continuing to do back in the U.K. anyway. My life is always going to be about public service, and Meghan signed up to that. The two of us enjoy doing that, trying to bring some compassion, trying to make people happy, trying to change the world in any small way that we can.”