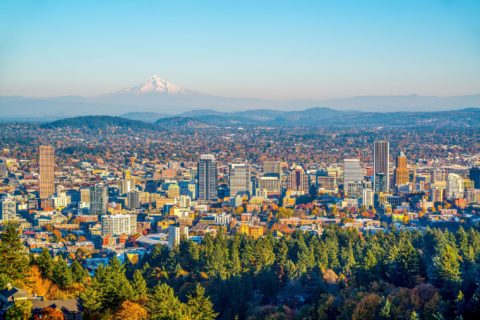 In Portland, Caring About the Environment is Cool

From sustainable energy sources to natural wine bars, this Oregon city is all about the eco-conscious way of life.

Spend one weekend in Portland, and a few things are guaranteed to happen more than once: You’ll be recommended a restaurant/brewery/bar for its artisanal, locally produced something-or-other, you’ll be enthusiastically urged to visit a hiking trail/park/garden nearby, you’ll be fed some sort of tidbit about the city’s eco-conscious way of life and, whether it’s a clear day or not, you’ll be prompted to spot Mount Hood (the highest mountain in Oregon) far off in the distance. This tells you pretty much everything you need to know about Portland. Fiercely proud of everything their city has to offer, locals will never fail to talk up the stellar outdoor activities, the homegrown businesses with ties to local farms and suppliers and the impossibly green, lush landscape they value so deeply.

“Portland is a city for two kinds of people: people who like to party and people who like to be outdoors,” says one of our Lyft drivers, en route to the Portland Japanese Garden (a five-hectare traditional Japanese garden, complete with koi ponds, a bonsai terrace and mini pagoda lanterns). He’s right on both counts. With 12 urban wineries, 77 breweries and 11 distilleries, it’s a mecca for people who love a night out. And if you’re the outdoorsy sort, Portland’s got it all: mountain biking, hiking, kayaking, skiing, snowboarding, you name it.

In a city filled with forests, mountains and rivers—not to mention locals who feel passionately about the environment—it makes sense for nature to rank high on the city’s lists of priorities. According to the City of Portland’s official website, “the preservation of scenic public views” is one of the reasons behind the city-mandated building-height limit. This explains why the tallest building in downtown Portland stands at 166 metres (40 storeys), half the height of Toronto’s tallest: First Canadian Place, which measures 298 metres. As you get closer to the Williamette River, which bisects the city, building heights are closely monitored so as not to disrupt the view of the river. The absence of soaring, competing skyscrapers gives Portland a kind of old-time charm. It’s a place where distinct architectural styles—from ornate beaux arts to Roman classical to intricate rococo—coexist with modern towers.

In downtown Portland, it’s hard not to notice the number of buildings proudly proclaiming their Leadership in Energy and Environmental Design (LEED) accredit­ation. A LEED certification is a globally recognized marker of “green buildings,” assessed on account of sustainable and eco-conscious parameters tied to things like energy, recycling and waste. The Nines Hotel, a favourite among high-profile guests, is a LEED-certified property that derives 100 per cent of its energy from renewable sources and also has an impressive rooftop—impressive because of its sweeping views of the city and surrounding mountains as well as its four beehives and herb garden. The hotel grows food on-site not only the traditional way (in soil) but also with fish (aquaponics), water (hydroponics) and mist (aeroponics). Everything at its restaurants is sourced from 30 different local farms, and surplus is pickled to avoid wastage. (Note: If you’re dining at its excellent steakhouse, be sure to order an extra plate or two of cornbread with your locally sourced grass-fed steak. You can thank me later.)

Natural wine bars like Dame, OK Omens and Ardor and biodynamic vineyards are on the rise, which isn’t surprising considering Portland’s dedication to an eco-conscious way of living. After all, Oregon was the first in the United States to introduce a “Bottle Bill,” which encourages responsible recycling by charging a 10-cent deposit on most glass, metal and plastic bottles. Bring back said containers to be recycled at a bottle drop centre and you’ll be reimbursed. The city also enforces a strict Urban Growth Boundary, which serves to prevent urban expansion and preserve forests, farmland and other green areas such as the city’s 2,104-hectare Forest Park (one of the largest urban forests in America).

In Portland, caring about the environment is cool. Composting is cool, sustainable energy is cool (the city uses 20 per cent more renewable energy than the national average) and recycling is cool. The guide on our hike up Mount Tabor (a city park situated atop a volcano) tells us that nearly every neighbourhood in the city has a volunteer-run community garden. Portland’s hotels, too, put equal emphasis on sustainability and local history. Boutique hotel Hi-Lo, designed by a woman back in 1910 (impressive!), is one of the first pressed-concrete buildings in downtown Portland. Originally developed as an office building, the refurbished hotel has maintained those original concrete beams—as well as its super-retro burnished mailbox—but has a decidedly millennial feel to it, with two large swings, a pastel colour palette, use of repurposed wood and even a signature scent developed exclusively for the hotel by local plant-based company Maak Lab.

This cross-pollination of local products and services is an essential part of the city, whose unofficial motto, “Keep Portland Weird,” encourages and applauds all its quirks, eccentricities and local colour. It helps explain the city’s love for local, independent, small-batch production—from popcorn and chocolate to hot sauce, sea salt and even toothbrushes. It’s this conceiving and championing of local businesses, however niche, that adds to Portland’s creative, individualistic and entrepreneurial spirit and, well, helps to keep it weird.