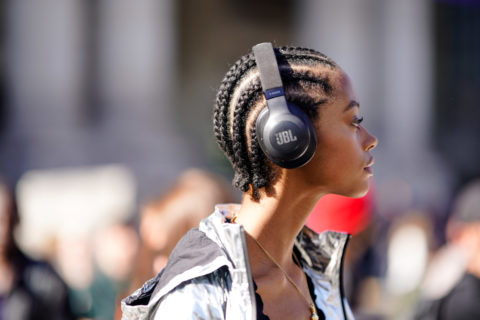 6 Podcasts to Distract You From the Coronavirus Situation

Looking for something non-news-related to keep you entertained (and distracted from current events) while you walk your dog, cook dinner or do household chores? Read on for six podcasts that do just that.

Staying in with Emily & Kumail

Oscar-nominated writers and real-life couple Kumail Nanjiani (fresh off a little show called Silicon Valley) and Emily V. Gordon have launched a podcast “to benefit those who are suffering from this weird quarantine moment.” Just like most of the planet, the two are self-isolating at home, something they’ve had experience with in the past since Gordon is immunocompromised due to an autoimmune disorder (the story of which formed the basis of their 2017 film The Big Sick). “This is not a podcast about the coronavirus,” wrote Nanjiani on Twitter. “We will be giving tips on how to avoid cabin fever, giving movie, tv & video game recommendations, giving tips on how to keep a schedule & updates on the bird vs. squirrel war raging outside our window.” Best of all, all proceeds earned by the podcast will go to charities associated with the coronavirus outbreak.

Hello all. @emilyvgordon & I are doing a podcast to raise money for various charities that help those affected by this quarantine. It's called Staying In with Emily & Kumail& the 1st ep is available right now! https://t.co/qQlxExHz51 pic.twitter.com/8MJJS4oPZt

A few weeks ago, the internet-focused podcast Reply All released an episode that became known as “instantly legendary.” Titled “The Case of the Missing Hit,” the episode sees podcast co-host PJ Vogt driven crazy by an internet-related mystery he can’t seem to solve. It all started when Tyler Gillett, a filmmaker from California, called in to the show hoping they could help him hunt down a ’90s pop song that’s stuck in his head but that he can’t find any traces of online. Pop music experts are called, online message boards are scoured, the song is even recreated from Gillett’s memory… and eventually the mystery is solved, although the conclusion is probably not what anyone expected. It’s a hilarious, curious and entertaining episode, much like the rest of Reply All’s oeuvre: previous episodes touch on things like a scandal at Teen Vogue, a UFO in the sky above a leather store, and the story of how “a shy, queer Canadian woman accidentally invented one of the internet’s most toxic male communities.”

EW on Set with Schitt’s Creek

If you’re a Schitt’s Creek superfan (and honestly, by this point who isn’t?!), you’ll want to check out this Entertainment Weekly podcast. Every Wednesday morning, the show’s hosts discuss the previous night’s new episode, and also bring on the show’s stars to share some behind-the-scenes stories and secrets. Dan and Eugene Levy, Catherine O’Hara, Annie Murphy, Noah Reid, Emily Hampshire, Dustin Milligan and even guest stars like Victor Garber have made an appearance on the show.

EW is headed to Schitt's Creek! EW On Set podcast brings listeners inside season 6 of the hit comedy https://t.co/VrwDPGGasA

New episode! A man in California is haunted by the memory of a pop song from his youth. He can remember the lyrics and the melody, but the song itself has vanished from the internet. We investigate.
https://t.co/Vqcl8nDDa1

Stuff You Missed in History Class

Holly Frey and Tracy Wilson co-host a biweekly show about obscure, bewildering and bizarre stories buried deep in history books. Since the coronavirus began gaining steam, however, they decided to go back into their archives to produce a set of 10 “goofier, more lighthearted episodes to help pass the time.” This Offbeat History playlist includes past episodes such as “The Great Moon Hoax of 1835,” “The Mystery of the Devil’s Footprints,” and “Marchesa Luisa Casati,” a deep dive into the life of the eccentric Italian heiress known for her lavish balls and parties in the early 1900s.

Our Offbeat History Playlist is now available! Check it out here: https://t.co/XuzXrpvKwp#OffbeatHistoryPlaylist pic.twitter.com/wKYdqmEve0

This is no feel-good show but it’s so incredibly engrossing that it’s guaranteed to take your mind off you-know-what. The first season of this investigative podcast by CBC Radio focuses on NXIVM (pronounced “Nexium”), a sex cult founded in Albany, NY, and tells the story of one Vancouver actress who defected from the cult and shared its secrets with the media. Subsequent seasons explore cases like the serial killings in Toronto’s Gay Village, the unsolved 1999 homicide of a teen from North York, and Satanic cults in 1980s America.

Why did rumours of Satanic cults spread so widely across North America in the '80s and '90s? @LisaBryn, host of Season 6: Satanic Panic, explores the phenomenon and traces its surprising roots in Canada.

This podcast from sports and pop culture website The Ringer features a rotating roster of staff members who sit down together to discuss movies they “can’t (and won’t) stop watching.” Each episode focuses on one particular film, with staffers breaking down their favourite scenes, what makes them so great and why they just can’t stop rewatching them. Recent episode discussions take on The Edge of Tomorrow, starring Tom Cruise and Emily Blunt; Pretty Woman, starring none other than Julia Roberts and Richard Gere; and a special three-part series curated by Quentin Tarantino.