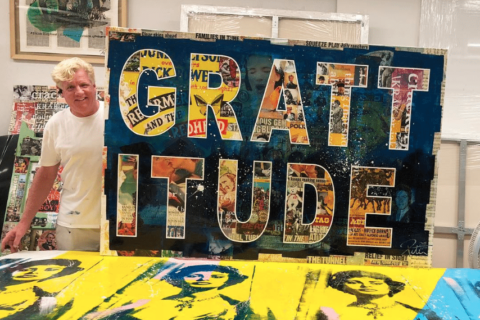 Twenty years ago in St. Tropez, Peter Tunney unexpectedly kickstarted his career as an artist. While walking around the city, he stumbled upon a construction site and discovered a sign that read, ‘Slow Down Construction Zone.’ For some reason, he decided to pick it up and then, with materials from a friend’s garage, created his own version: ‘Slow Down, Time Passing’. It became a bit of a habit and during the nights, he started to replace signs all across the city with his recreations. People began saying: “You need to make more.”

Two decades later, Tunney has created quite the name for himself, his art sought out by collectors all over the world. But his gallery spaces in New York and Miami hold work that is clearly still influenced by his sign-changing days. The billboard-like pieces feature the same bold typography and thought-provoking messages, and although they may not be sourced from construction sites in St. Tropez, Tunney hasn’t stopped looking for inspiration on the street. “Turning trash into treasure, that’s my game,” he says.

Tunney’s latest collection, which is on display in the basement of Toronto’s recently opened MINDSET Brain Gym, features unconventional canvases like airplane wings, basketball hoops and surfboards. The actual canvases are covered in layers upon layers of old movie posters, newspaper clippings or even pages ripped straight from the dictionary. He walks over to a piece that is covered in musical scores by Mozart, before turning towards another covered in vintage yellow wallpaper. On top of the materials are layers of colour, painted phrases and whatever else Tunney thinks seems right. “It’s almost like choreography,” he says. “If you’re watching me paint this, I can control what you see with my brushes.” He gestures to an exposed sentence, wiped clean of its surrounding paint, at the bottom of a nearby piece.

It would be easy to liken Tunney’s work to scrapbooking–and that’s kind of what it is. “I like to save everything,” he says, mentioning the diaries he used to create with fellow artist, Peter Beard. “The fact is, I’m picking stuff up as we walk around, even in Toronto. I like to put it all in there. It’s kind of evidence of your life lived.”

One thing Tunney’s art has always incorporated is an overwhelming feeling of positivity, but he says he’s not necessarily one of those people who thinks everything is just going to work out. “I consider myself an elated pessimist,” he says before adding, “I’m going to remember that term, that’d be a good painting.” He mentions his own struggles and times that he’s been in dark places, but credits his son for making him realize that leading a joyous life is totally possible, even if it becomes more challenging with age. “I’ve got a three year old kid, he’s beautiful and he’s got no fear of the future, no regrets… He’s loving every single water drop and oatmeal cookie and spark. That’s my teacher,” he says. “It’s like, I’m here so let’s dance!”

Most recent work, finished today. I'm breaking out for a new show in Toronto in September. This quote is by Einstein – TRUTH!

One of the artist’s favourite things to explore in his work is the concept of courage. He asks me what my definition would be and I mumble something about showing no fear. He corrects me. “Courage is a quality of mind,” he says. “What a beautiful choice of words, right? A quality of mind that allows one to remain calm and in firm control of oneself, with confidence and resolution in the face of danger. Courage is calmness in your heart.”

MINDSET Brain Gym, a place that strives for that same calmness, seems the perfect fit for the message Tunney is trying to convey. The space, which offers guided meditation, is a sanctuary from the busy rush and chaos of everyday life. For Tunney, his own form of meditation comes from making art. He combats the turbulence of his personal life with paint.

Places like the MINDSET Brain Gym and outlets like painting and art are becoming even more important in the world that we live in today. It seems that each year kids are getting more and more stressed. “In my perception, there’s an unprecedented level of generalized anxiety that’s running through everybody’s veins,” Tunney says, mentioning the rift between social media profiles and real life. In fact, he recently partnered with rapper, Logic to create a week-long mental health awareness event at Michigan University titled, Who Can Relate? And in general, Tunney always makes sure his art is benefiting not just himself, but other people. He gives away paintings weekly that help go towards causes he cares about, whether that’s fighting to get innocent people out of jail or funding schools in Haiti. “You have to help other people,” he insists. “You have to give away your human energy to maintain your own.”

I take a moment to walk around the gallery in silence. Instrumental music from the soundtrack of The Mission swells overhead. Tunney says he chose the music to slow people down a bit, to encourage people to take a moment and breathe everything in. “Be present,” he says–a mantra that people are striving for in the meditation rooms just upstairs. “Disconnecting is really reconnecting. With your own brain. With your own mind. Be here.”

Peter Tunney’s Mindset? exhibit is available to all members of the MINDSET Brain Gym and will host a number of upcoming events. The pieces will stay on display for about 100 days.