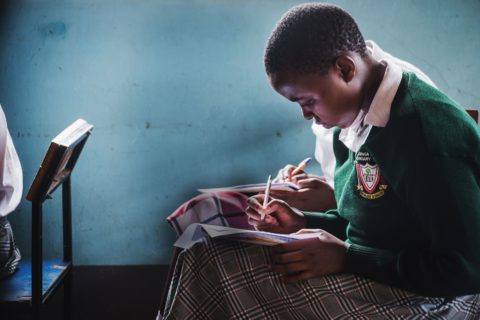 AG Hair founder Lotte Davis started One Girl Can to make a difference.

On the drive out of Nairobi’s Jomo Kenyatta International Airport around midnight, I see groups of hyenas, wildebeests and zebras scattered along the medians. They’re statues, but in the darkness they seem almost real. Most tourists come to Kenya for safaris, but I’ll be following Lotte Davis, co-founder of Vancouver-based AG Hair, on one of her visits to learn about the five schools and 193 students she supports through her charity, One Girl Can.

After a brief nap, I catch another flight with Davis to Masinga, a small rural village 150 kilometres northeast of Nairobi. When we land, we drive along dirt roads that are best suited for off-road vehicles and pass cattle emaciated by a third straight year of drought. At the Masinga Girls Secondary School, we are greeted by hundreds of students singing in Swahili: “Our visitors are glittering from their foot to their head.” They surround us and put tinsel garlands around our necks. I’d take another 20-hour flight just to hear that song again.

As assiduous as they come, 66-year-old Davis has mastered the art of condensing a couple of days’ work into half a day. Before lunch, she’s already met with the headmistress and new One Girl Can scholarship students, checked on building projects and conducted a 2.5-hour workshop about confidence and career planning. That’s when the girls learn her reason for being here.

Davis was born in South Africa and grew up in the midst of apartheid, witnessing segregation, discrimination and violence. “I think I have an innate sensitivity to injustice,” she says. “I remember being four or five years old and listening to how some people were spoken to and treated differently.” She immigrated to Canada in the ’60s and built a $30-million professional hair company with her husband but knew she wanted to do something that would empower girls, especially in Africa.

Seeing her two daughters leave home was the tipping point. “One day, I went down [to their rooms] and there was nothing left, and I wept uncontrollably. I thought, ‘The best thing I’ve done in my life is over.’ That was the day I started looking for organizations in Africa.” In 2008, she returned to her home continent to get involved with girls’ education. Today, because of extreme poverty, poor government funding and gender disparity, sub-Saharan Africa has the highest dropout rates of girls in the world.

Back in Nairobi, we catch a morning flight for Malindi to visit Ganze Girls Secondary School. Here, One Girl Can’s latest project is building two science labs—without them, the girls who dream of becoming doctors wouldn’t have a chance. There we meet 17-year-old student Rehema. She’s a B student and excelling at math but is frequently sent home because her family can’t afford to pay the school’s fees. Her father lives in another city and contributes $12 a week of his carpenter’s salary to his family of nine; her mother makes $12 a week at the market and collects firewood for the school to help defray fees. The Kenyan government only supplies teachers and some textbooks; secondary-school tuition can cost $500 a year per child.

When Rehema is not in school, she has to fetch water twice a day for her family. We follow her on the 90-minute return trip to the nearest water source. On the way back, she makes balancing a full 18-kilogram jerry can on her head look easy, while the rest of us are merely burdened by the scorching pre-noonday sun. Davis decides on the spot that Rehema will be One Girl Can’s latest beneficiary.

Growing up in the more prosperous capital isn’t necessarily any easier. In Nairobi, we visit Kibera, the largest urban slum in Africa, where about 250,000 people live within 2.5 square kilometres. Electricity is sparse and sanitation nonexistent, and “you smell Kibera before you see it,” Davis forewarns.

The Kibera school project is special to Davis, in part because of 18-year-old Rahma, a student she met here eight years ago. When they are reunited, I see the effect they’ve had on each other. In Rahma’s presence, Davis is the softest I’ve seen her. Rahma is striving for a different life. She wants to get out of the slum, earn her own money and then come back to help Kibera. “The minute I saw her, I knew there was something so special about her,” says Davis. “There was a determination in her eyes.” The next day at Nembu, a secondary school 40 minutes outside the slum that has taken in three girls from Kibera, I think of Rahma when I read the principal’s placard: “Where a girl is born is not her destiny.”

To get to the fifth school, we fly to northern Uganda and drive between the Atanga Girls Secondary School and Gulu, where we’re staying. The temperature hovers between 43°C and 46°C, yet women walk the red dusty road carrying both babies and water jugs. We meet 21-year-old Akera, a lab assistant at St. Mary’s Hospital Lacor. She’s unflaggingly cheerful and tells us that when she was studying for her training certificate, she used to dodge the university registrar for months because she couldn’t pay the fees. One Girl Can heard about her and stepped in, and she is immensely grateful.

She joins us for our last supper wearing a vibrant dress and matching head scarf. She reveals that her father lives in town but has no interest in having a relationship with her. And, with tears in her eyes, she recounts the time her aunt’s husband tried to force himself on her. The meal ends, and Akera gets up to leave. After hugging me, she takes the scarf off and places it in my hands. “I can’t take this,” I reason. “It matches your dress!” She insists, and I accept, my eyes welling up.

I think about that sign: “Where a girl is born is not her destiny.” Davis believes this, too. “These girls are fiercely determined, and I’m fiercely determined to help them,” she says. “My job is to give Rahma and Akera and the thousands of other girls like them the chance to achieve the same goals we have for our own daughters.” 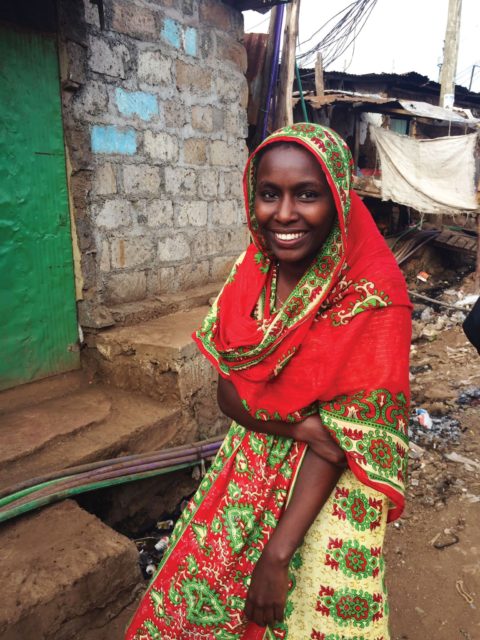 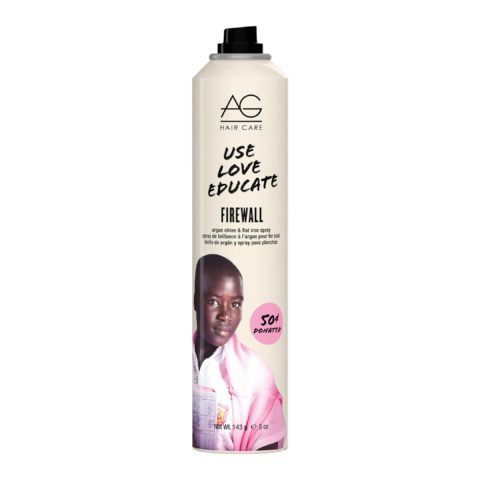 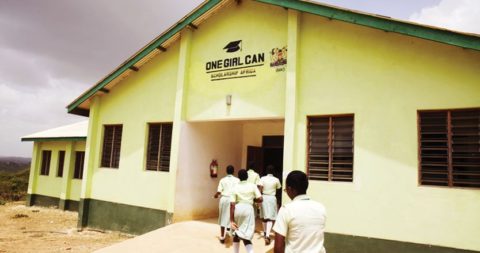 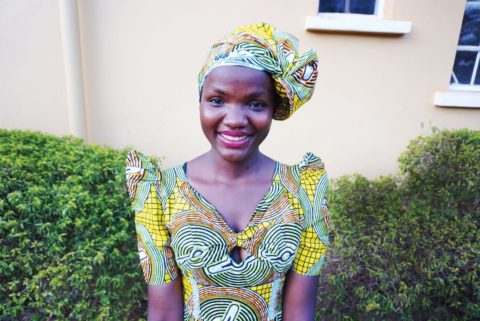 One Girl Can recipient Rahma. You can support an individual university student directly by clicking here to donate.

AG Hair gives 10 cents from every litre of product sold and 50 cents from each Firewall spray sold to the One Girl Can Foundation.

You can contribute to the facilities at the Masinga and Ganze schools supported by One Girl Can, including their classrooms, dormitories and washrooms by clicking here to donate.

One Girl Can recipient Akera. You can support an individual university student directly by clicking here to donate.

Photography by Rose Muthama
Get the best of FASHION in your inbox Thanks for signing up!
The latest fashion, beauty and celeb news delivered right to your email #FASHIONforall Now, check your inbox to complete your subscription
We won’t ever use your email address for anything else
Want even more FASHION? Follow us on social media.