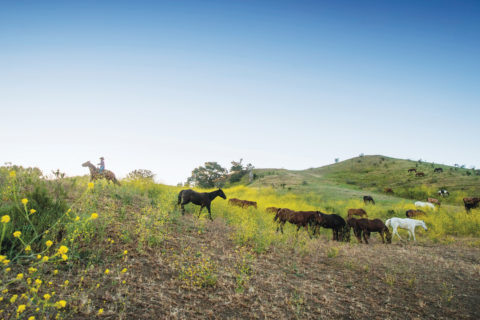 How a Well-Timed Trip to Ojai, California Helped One Writer Overcome Grief

"I felt a strange kinship with the landscape—we had both been visited by some kind of hellfire, but here we still were."

I’m at Alisal Guest Ranch and Resort, a 4,047-hectare dude ranch about 30 minutes outside of Santa Barbara, Calif., and I’m riding a horse called Zippo through the Santa Ynez Valley. There is something primordial and cinematic about the landscape here: an emerald vastness that looks like it still belongs to the Spanish vaqueros, conjuring a mythical vision of California as a golden land of bounty, a dream of a place that probably never existed. Mistletoe-bearded valley oaks and ancient sycamores that look like heroes in a Steinbeck novel decorate eagle-touristed glens greener than Vivien Leigh’s curtain dress in Gone with the Wind. Golden eagles are not the only celebrated guests to visit the property since it opened in 1946. Doris Day was a frequent visitor; Flying Ebony, a bay stallion and Kentucky Derby winner, was retired to stud here; and Clark Gable married model and socialite Lady Sylvia Ashley in Alisal’s library, which is next to my room—a study in cowboy coziness, all saddle browns and southwestern virgin-wool Pendleton blankets.

This was about a year ago, and I remember looking past Zippo’s velvety brown ears and taking in the splendour of the scenery as a couple from Santa Barbara talked about how much they hated the movie Sideways. “Tourists are still coming in droves to drink Pinot Noir!” the woman said to her husband, who nodded in despair. “Santa Barbara and this valley have never been the same.” Mostly, though, what I recall is the event that led me here. Two months earlier, in the sharpest depths of winter, I lost a pregnancy at 22 weeks. It was an experience that I will reductively and summarily describe as unspeakably painful. The next couple of months were a blur of grief and sadness; I can hardly remember anything about that time, except that I spent most of it in bed crying. It was around then that I received an invitation to visit California’s Central Coast. It somehow felt like an invitation to survive, so I booked my ticket. In retro­spect, this was an urgent, protective need for denial and escapism but also a need to move toward the light.

It somehow felt like an invitation to survive, so I booked my ticket.

The (literal) light is particularly splendid in Ojai (pronounced Oh-high)—an unrelentingly beautiful city 90 minutes north of Los Angeles. There is the so-called “pink moment” at dusk, when the setting sun bathes the valley in a blushing alpenglow, tipping mountain peaks in crowns of pink light as if by a magic wand. But it’s the mountainsides that struck me most. When I arrived there in early spring, the area had been ravaged by horrific wildfires. I drove past hills and mountains that were singed and patched with straggles of ghostly blackened bushes but also flecked with green. I felt a strange kinship with the landscape—we had both been visited by some kind of hellfire, but here we still were: compromised and battle-scarred but trying to come back to life.

I’ve long had an emotional connection to California. I first visited San Francisco when I was 15 and loved it—its cloud-skimmed buttermilk-and-pistachio-coloured Victorians, its histrionic hills—with the kind of ardour you can only muster at that age. My dad lived in California before I was born, and I grew up hearing about his time at Berkeley (where he got his PhD in the ’60s), which somehow bound California in my imagination to romantic notions of youth and freedom.

About six years ago, I got married at San Francisco’s City Hall and honeymooned at San Ysidro Ranch, outside of Santa Barbara—where Vivien Leigh and Laurence Olivier got married, where Jackie O. and JFK honeymooned and where John Huston spent three months lounging around the bougainvillea and penning The African Queen. When I visited, bunnies with tails as fluffy as the local gardenias hopped about the chef’s gardens and bizarrely loud hummingbirds gathered nectar from the flowering quince. But the hotel, preposterously picturesque, had been completely destroyed by the fires and the mudslides. (It’s scheduled to reopen sometime this spring, after an extensive restoration.)

I was in deep need of extensive restoration, too. After a couple of days at the Alisal, I checked into the Ojai Valley Inn. Birds chirped festively from 200-year-old oak trees as if to greet me. (I’d be singing, too, if I lived there.) The property looks as if it were lifted from Andalusia—a fountain-spouting fantasia of whitewashed buildings, hand-painted Spanish tiles, coiling pathways, pool-blue skies, wildflower-dressed meadows…all accompanied by the scent of orange blossom. “It’s pixie season!” I was told repeatedly by the bellhop, the concierge, my Uber driver and a sales clerk at Bart’s Books, an outdoor bookstore where weathered rare paperbacks enjoy citrus-perfumed breezes. “They’re here!” everyone said about the pixies, as if they were talking about visiting celebrities. But pixies are a kind of local celebrity citrus—a petite, deeply perfumed tangerine that only grows in Ojai California’s utopic microclimate. The way a tourist might take an open-top bus tour of the mansions in Beverly Hills, I decided to ride a bike into some nearby pixie orchards. The pixies blazed amid luxuriant green boughs, amid constellations of richly fragrant waxy white flowerlets; it’s a scent—intoxicating, life-validating—that has stayed with me ever since.

That afternoon, I wandered (possibly trespassed) around those orchards, through petals of ripening afternoon sunshine, through the delirium and stubbornness of that scent, and it presented me with the first moment I’d had in a long time in which I felt the smallest bloom of hopefulness. It also gave me the conviction that citrus tourism and therapy should be a thing. I rode back to the hotel, my basket full of pixies, each a little planet of pleasure and sunshine and hope.