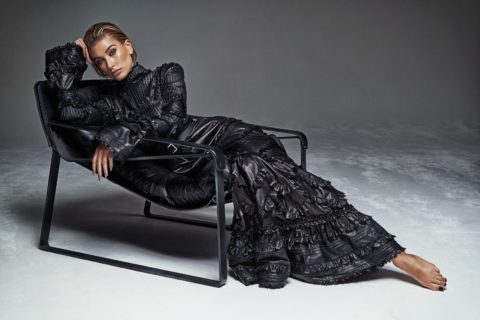 The soon-to-be supermodel draws stares (and followers) everywhere she goes. But she’s not wild about all the attention.

From where we are, we can see the stacked blocks of the Brooklyn skyline, romantic and rust coloured in the afternoon sun. A constant stream of helicopters land and take off like dragonflies on a helipad that extends into the East River. There are boats, too, peeling the surface of the water, briefly exposing the white-water fruit underneath. This is a good spot to snap a selfie, eat lunch or idle away a coffee break.

Only, today it seems the coffee breakers are paying attention to something besides the view. Hailey Baldwin—hair slicked back, wearing a skirt and jacket by Off-White and looking by turns defiant, powerful and sultry—is getting her picture taken and interrupting their moment of reprieve. The contrast between this and the ordinary activity of the ordinary people feels surreal. It’s a New York moment: absurd and charged with celebrity.

Some of the bystanders don’t quite seem to know how to handle the strangeness. Behind the photographer and the small crew, three women in their 50s or 60s have stopped to gawk. In their sensible shorts and hiking shoes (all the better to tackle the urban jungle!), they start grotesquely mirroring Baldwin’s poses. To them, this is a laugh riot, like they can’t believe how loony this fashion thing is.

Baldwin is taking two energetic, bounding steps forward, stopping, walking back and then repeating, like a human gif. It is then that she notices her imitators. She calls one of the photo team over and asks if someone can ask the women to move on. They leave without drama. “I never want to be a bitch,” Baldwin says to no one in particular, “but they were making me feel uncomfortable.”

This reminds me (because I am a normal human who isn’t a model and am therefore not always empathetic to the plight of professionally beautiful people) that what Baldwin is doing right now is her job. I imagine two random men passing behind my cubicle, stopping to watch me type and then, in exaggerated pantomime, copying my typical workplace behaviour, bugging out their eyes, reading pretend emails, arms outstretched like zombies mashing invisible keyboards. That would make me feel uncomfortable, too. Baldwin just wants to do her job.

For someone who has more than 10 million Instagram followers and quite literally makes her living by being looked at, Baldwin doesn’t seem too fond of attention. When it’s time for our interview, she has changed back into her civilian clothes: black track pants, an oversized sweatshirt and chunky heels. Her hair is pulled back into the simple ponytail worn by every celebrity in every celebrity profile. She’s moving constantly: hugging the hairstylist, packing her suitcase, figuring out her flight to L.A. that evening. If I didn’t know better, I’d think she was intentionally avoiding talking to me.

Only, I don’t know better. Once she finally sits down, she tells me she isn’t sure if she should talk to me. Recently, she had a frustrating experience with another magazine. A writer projected a narrative on her time with Baldwin that wasn’t exactly true, and Baldwin didn’t appreciate it.

After some reassurance and a peek at the questions in my notebook, she agrees to answer some of them. The only question she takes issue with is the one about being an influencer. She hates that term. That’s not what she is. She’s a model. And I gather (while, obviously, being wary of projection) that her wariness isn’t just about having been burned by another writer. She simply doesn’t feel entirely comfortable with the idea that being interviewed and talking about her life should be an essential part of her job. She has millions of followers, but cultivating an audience isn’t her goal. Like anyone in her position, she wants to try her hand at acting and hosting, but right now she’s a model.

So far, she’s done pretty well. On the runway, she’s walked for many A-list designers, such as Elie Saab, Dolce & Gabbana and Tommy Hilfiger. And she’s also graced the covers of Marie Claire, Harper’s Bazaar (Australia) and Maxim—which named her the sexiest woman alive in its June/July 2017 issue.

But modelling wasn’t always Baldwin’s plan. She had a very normal, suburban childhood. It was laid-back, even though her father is actor Stephen Baldwin and there are pictures of her on red carpets as a girl. “That was always a reality,” she says. “But because of the way my parents raised my sister and me, that was always separate—that was Dad’s work life. When we were home, we were just home, hanging out.” (If you’re confused about the middle-aged Baldwins, Stephen is Alec’s youngest brother—the Trump-supporting, religious one who was in The Usual Suspects.)

“I’m timid and goofy. Once you get to know me, you’ll see I’m clumsy, but I think it’s funny. Some girls really know that they’re pretty, and they act like it. Which is fine.”

For her part, Baldwin planned on being a ballerina, until she was injured and turned to modelling instead. “A year ago, I wouldn’t have thought that I’d be doing what I’m doing now,” she says. “I can’t plan things ever. Things change so quickly.” This, actually, brings up another reason why Baldwin may be so wary of interviews. Even though she’s friendly, engaged and relatively open as we chat, I sense she’s worried that talking about being a model makes her sound vain.

“I’m still kind of shy about that.” she says. “I’m timid and goofy. Once you get to know me, you’ll see I’m clumsy, but I think it’s funny. Some girls really know that they’re pretty, and they act like it. Which is fine.”

But that’s not Baldwin’s style, which seems incongruous with her 10 million plus Instagram followers. However, those 10 million followers aren’t always supportive. “It adds a lot of layers of insecurity,” she says. “You’re being told on a much larger scale that you’re not pretty, you’re not this, you’re not that. Basically, it adds a lot of layers of bullying.” And while she’s better now at ignoring the trolls, focusing instead on her positive fans, the online critiques can be insidious.

“Even if you aren’t conscious of it, it does make your mind spin a little bit,” she explains. “You think about what they’re saying, and you wonder if they’re right. ‘If they think this and are noticing this, then obviously there must be something that’s making them think that.’ There can be 10 positive comments and [only] two negative ones, but you’re going to focus on the ones that are picking at a bone that is sensitive for you.”

Baldwin credits her faith with helping her keep things in perspective. She attends Hillsong Church—“the church where people wear Saint Laurent and [there are] cool hipster pastors,” she jokes. (Justin Bieber also attends, among other tattooed and behatted millennials in New York.) “They’re very geared toward young people and making it applicable to everyday life, which I think is where people get a little confused in church, because it can be hard to relate to something so old school,” she explains.

Where a lot of people will post Brené Brown on their Twitter and Instagram, Baldwin posts tiny devotionals and prayers about her desire for God to show her how to use her talents for a purpose greater than herself. Baldwin’s faith is the kind that extends beyond awards-show shout-outs and/or crucifix tattoos. It likely goes without saying, but this is not typical behaviour for someone in Baldwin’s position. Imagine Kate Moss in the ’90s preaching the Good News Bible. (I can’t either.)

“I don’t think anybody should be afraid to represent or talk about it, even though I feel there’s something about Christianity that makes people very touchy,” she says. “Definitely, at times—even now—it’s hard for me. Which is why, now in my 20s, I try to surround myself with people who believe the same thing I do—who follow it and are open to it—because it’s too hard to constantly get people to understand what I do if they just aren’t interested in it.”

Baldwin represents the millennial contradiction: She’s comfortable sharing her life online—but in a curated, controlled way. It’s called “sharing” for a reason. She’s not giving every aspect away. The line between who she seems to be and who she really is porous and thin, but it’s still a line. “I have my own morals and standards, which are different from other people’s,” she says. “Alone time is really important when you do this because every time you’re working, you’re around a lot of different energies. It weighs a lot on you. That’s why I like coming home to New York and being able to be myself for a couple of days. You know how fun it is to do errands? I’m never home, so I’m like ‘I have to go buy sheets—that’s awesome!’ And then I just sit at home and watch the Food Network.”

It’s a cliché and, frankly, disingenuous at this point to claim that a professionally beautiful person who is followed by millions of normal people is herself normal. Baldwin isn’t normal—whatever that means. She comes from a famous, loving and, sure, sometimes embarrassing family. She is deeply religious and wants to start her own family at a relatively young age in an industry that encourages neither. Her features, which she admits she had to grow into, now seem unfair. No, Baldwin isn’t normal. But somehow she’s still just like us.

Photography by Richard Bernardin. Styling by Zeina Esmail. Creative direction by Brittany Eccles. Hair, DJ Quintero for Statement Artists. Makeup, Carolina Dali for The Wall Group. Manicure, Riwako Kobayashi/Le Vernis Chanel. Fashion assistant, Stefany Mohebban.
Get the best of FASHION in your inbox Thanks for signing up!
The latest fashion, beauty and celeb news delivered right to your email #FASHIONforall Now, check your inbox to complete your subscription
We won’t ever use your email address for anything else
Want even more FASHION? Follow us on social media.