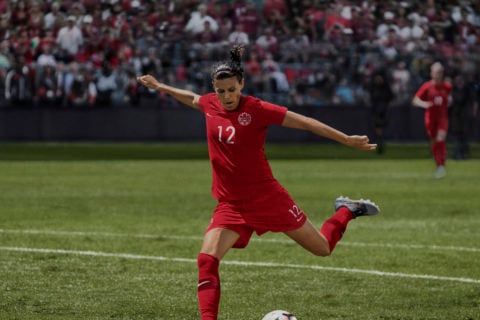 While it may be a big night for the Toronto Raptors, it’s also a massive day for Canada’s Women’s National Soccer Team, as they play their first 2019 Women’s World Cup game against Cameroon.

In light of the game, which airs at 3 p.m. EST today, Nike has unveiled a powerful TV spot honouring captain Christine Sinclair, who has been playing for Canada since 2000. (Yes, 19 years!) Sinclair is currently four goals away from breaking a World Record for the highest international goal tally, a feat she will most likely champion during the Women’s World Cup.

Believe in yourself until everyone else does too. #justdoit

The 30-second ad, entitled “Make a Nation Believe,” features clips of people from all walks of life donning the 35-year-old’s jersey while out on the field, at the skatepark, on the school bus, etc. The spot definitely evokes an emotional response (when was the last time you saw a guy donning a women’s team jersey?). However, we expect no less from a brand that has been at the forefront of encouraging women to stay engaged in sport.

At a global summit held in Paris this past March, Nike Women’s vice-president Rosemary St. Clair announced the campaigns and innovations that would be rolling out this year. Thus far, we’ve seen the release of the compelling Dream Crazier commercial (narrated by the one-and-only Serena Williams), the the whopping 57-piece sports bra collection (including the Fenom Flyknit, the official bra of the tournament) and the soccer kits the brand designed for 14 of the 24 teams competing for the Women’s World Cup. The “Make a Nation Believe” spot is latest of the campaigns slated to roll out this year.