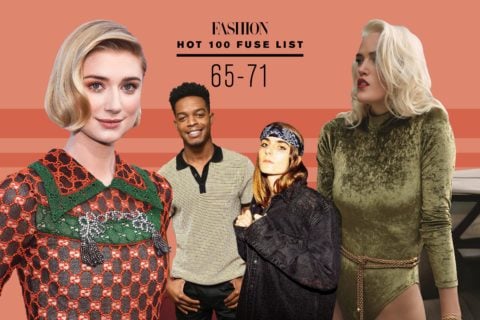 From Stephan James to Bülow, Meet This Year’s Rising Stars

In our Winter issue, FASHION editors rounded up the 100 people, products and experiences we think will blow up in 2019. It’s our inaugural Hot 100 Fuse List. From the workouts you’ll be doing, to the new designers and artists you’ll see on your feed, this is your guide to being in the know this year. These are the next young actors, musicians and entertainers who will be taking over Hollywood.

Younger (or just dance-obsessed) readers might remember Johnson’s impressive moves from the Family Channel favourite The Next Step. But going forward, people will remember Johnson, who hails from the Six, for his vulnerable and powerful roles in the urgent The Hate U Give and Native Son, not to mention the new X-Men flick Dark Phoenix. But don’t worry: The man can still dance. –Greg Hudson

Elizabeth Humfrey looks more like a designer for Balenciaga than a girl who grew up on a goose farm in rural Wales, but both things happen to be true. Humfrey, better known by her stage name Betsy, launched her career on the heels of a stint at the Parisian fashion house and a degree from the revered Central St. Martins in London. Catch her if you can. Armed with a bunch of fierce ballads and a voice that could stop Cher in her tracks, this diva won’t be kept down on the farm. –Jeremy Freed

In 2018, James starred in If Beale Street Could Talk, Barry Jenkins’s follow-up to the Oscar-winning Moonlight. He also starred in Amazon’s drama series Homecoming, opposite needs-no-introduction Julia Roberts. It was, by all measures, a big year for any actor but especially for one who is still shy of his 25th birthday. “I’ve been lucky to be a part of a lot of really cool things, and there are a lot of projects that are coming my way now, which is really cool,” James says. Both of these projects premiered at the 2018 Toronto International Film Festival (TIFF) to critical acclaim, a moment especially poignant for the Scarborough, Ont., native.

“TIFF has always been one of my favourite times of the year,” he says. James, who got his start back in 2010 as an actor on Degrassi: The Next Generation, will appear next year in 17 Bridges alongside Chadwick Boseman, Sienna Miller, Taylor Kitsch and J. K. Simmons. “I’ve never done a film with this level of action,” he says. “So it’s an exciting film.” It’s probably safe to say that James can expect many more exciting firsts in the years to come. –Pahull Bains

In 2017, Megan Bülow was a virtually unknown 17-year-old high-school student in Holland. Then she released her first song, a synth-saturated, anti-romance anthem titled “Not a Love Song” that had music journalists across the web calling her a “pop genius.” The song went viral on SoundCloud and Spotify, but bülow (she dropped her first name and the capital B for her new gig in the spotlight) had to finish her senior year before becoming a full-fledged pop star. She wrote her final exams, and then the German-Canadian singer-songwriter moved to Toronto. The city welcomed her with open arms: bülow starred in Roots’s 2018 Sweatstyle campaign, performed at the iHeartRadio MMVAs and headlined a show at the iconic Mod Club. Up next? After her two successful EPs, fans are anxiously awaiting a full-length bülow album. We’re hoping 2019 will be the year. –Meghan McKenna

This statuesque Australian actress is no new kid on the block—you might remember her as Jordan Baker in The Great Gatsby or the gold-dipped Ayesha in Guardians of the Galaxy Vol. 2—but this is the year we can expect to see her catapult firmly into the spotlight. At TIFF, it was impossible to hear any chatter about Widows—the buzzy new thriller from Steve McQueen—that didn’t involve ebullient praise of Debicki’s performance. And that wasn’t her only big TIFF premiere of the year. The 28-year-old actress also stars as a fragile but incandescent Virginia Woolf in Vita and Virginia.–Pahull Bains

There is plenty the world doesn’t agree on these days, but there is perhaps no topic quite as contentious and thorny as feminism. Which is why Toronto-based playwrights/actors Amy Nostbakken and Norah Sadava’s film Mouthpiece is so remarkable. In the film, which is an adaptation of their 2015 play, Nostbakken and Sadava play two often-sparring versions of the same character’s internal monologue. The story follows Cassandra as she grapples with the reality of her mother’s sudden death, reflecting on how her mother’s own feminism shaped her. “Social media has created this condition of extreme views,” says Sadava. “We’ve stopped giving ourselves time to process anything because it’s just about reacting. This film shows a woman processing difficult things. We need to start that internal monologue again.” –Pahull Bains

You know Karena Evans’s work even if you don’t know you know Karena Evans’s work. The Toronto native directed four of Drake’s 2018 music videos: “God’s Plan,” “Nice for What,” “I’m Upset” and “In My Feelings” as well as the video for SZA’s “Garden (Say It Like Dat)” featuring Donald Glover. Not content to just stay behind the camera, this past year she also starred in two feature films—Every Day and Firecrackers, the latter of which premiered at TIFF—and has a recurring role in Mary Kills People. Not too shabby for a 23-year-old. –Pahull Bains

Elizabeth Debicki and Stephan James via Shutterstock. Bülow by Luke Raymond. Betsy courtesy of Betsy.
Get the best of FASHION in your inbox Thanks for signing up!
The latest fashion, beauty and celeb news delivered right to your email #FASHIONforall Now, check your inbox to complete your subscription
We won’t ever use your email address for anything else
Want even more FASHION? Follow us on social media.