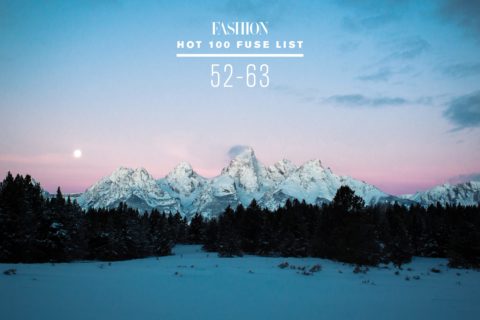 In our Winter issue, FASHION editors rounded up the 100 people, products and experiences we think will blow up in 2019. It’s our inaugural Hot 100 Fuse List. From the workouts you’ll be doing, to the new designers and artists you’ll see on your feed, this is your guide to being in the know this year. It’s time to go big, not home. Here are our top 12 on-the-cusp-of-greatness destinations that will be taking over your Discover feed.

Eat: For a cozy and casual vibe, check out the “good energy” and comfort food at Teahouse, tucked away from the Plaza, on Canyon Road’s gallery row. Sitting on its patio will make you feel like you’re in a tree house under the stars.

Judging from the gift shops in Albuquerque, N.M., you’d think Breaking Bad was the biggest thing to happen here—ever. But head 90 minutes northeast to Santa Fe and you’ll find wide open spaces, Georgia O’Keeffe-famous skies and deep Indigenous traditions. The town appears like a mirage in the desert, with its low-rise terracotta-coloured buildings made of adobe bricks. Coach’s Stuart Vevers referenced Santa Fe in his Spring 2019 collection. Tom Ford keeps a ranch (nearly one-and-a-half times the size of Manhattan) nearby.

Visit in August, when the city of 80,000 pulls out all the stops for the Santa Fe Indian Market, where more than 1,200 Indigenous artisans from across North America set up shop in the city’s historic Plaza. Play “spot the local,” searching for collectors clad in elaborate turquoise necklaces and rings in the Native American style. Fashion design is a growing draw at the market, with tickets to the fashion show consistently selling out. But our favourite event was the Native American Clothing Contest, which showcases bygone traditional dress from various Indigenous communities. It’s a fascinating visual reminder of the multitude of tribes that today’s Indigenous people descend from. –Jacquelyn Francis

Drink: Since 1937, The Million Dollar Cowboy Bar has been propping up the town square with its Vegas-style neon, local craft beer and big steaks.

Drink: Head to the legendary beer gardens at the Chinesischer Turm Restaurant & Biergarten, a must-visit spot in the massive Englischer Garten Park.

Berlin may steal the show as Europe’s edgiest city, but Munich has its own charm. There’s the famously raucous Oktoberfest, a massive annual party where revellers guzzle about 6.9 million litres of beer. Things are a little more refined in late November, when it transforms into a winter wonderland for its Christmas market (Weihnachtsmärkten). –Caitlin Agnew

Eat: When you’re done shredding the slopes, warm up with a cup of heated sake and a hearty bowl of hotpot at Sumo Nabe.

In the winter, if you take a nap on the 80-minute train ride from Tokyo to Nagano, you’ll wake up, look out the window and think you’ve travelled into a snow globe. But don’t stop here. Grab a ride 50 kilometres north to Nozawa Onsen, a sleepy Japanese ski village famous for its hot springs and premium powder. –Meghan McKenna

The southern Caribbean tri-island destination of Grenada, Carriacou and Petite Martinique is trending for its off-the-radar peace and quiet. Known as the “Spice Island”—nutmeg, cinnamon, cloves, ginger and turmeric can be found here—Grenada has 49 white-sand beaches and more than 30 scuba diving sites (including an underwater sculpture park) plus the best organic tree-to-bar chocolate. –Doug Wallace

The Kochi-Muziris Biennale, an international contemporary art exhibition held every two years in the southwestern Indian city of Kochi, attracts, on average, over 600,000 people for installations and performances by more than 80 national and international artists. Follow its map on foot or by auto rickshaw to explore this former Portuguese trading outpost. –Shalini Roy

Stay: The Harbourmaster Hotel in the sleepy coastal town of Aberaeron oozes comfort from every corner of its 13 seaside-chic rooms.

If a U.K. road-trip piques your interest, consider visiting Wales, where the highways are less crowded (good if you’re new to driving on the “wrong” side of the road). The window for sighting bottlenose dolphins, harbour porpoises and Atlantic grey seals in Cardigan Bay is at its best between June and October. There are also about 600 castles. –Doug Wallace

Thanks to its location (roughly 400 kilometres north of the Arctic Circle and a short two-hour flight from Oslo) and the midnight sun, midsummer is when this cool island city shines. Twenty-four hours of sunlight means late nights don’t seem that late, which works out perfectly if you’re at Bukta, a three-day (and all-night) rock-music festival. Bang out to the best bands from Norway while sipping craft beer from Mack Microbrewery. –Emma Yardley

More than 50 shades of grey are flung around at the Boryeong Mud Festival every July on Daecheon Beach in Boryeong. When it launched in 1998, it was to celebrate the health benefits of its mud, but it has transformed into one of the most outrageous bucket-list festivals in the world. Participants slide, wrestle and swim in mud while others party at performances by K-pop acts. –Tiffany Leigh

Drink: At Tippling Club, each item on the drink menu includes a picture of the gummy bear that inspired it; before ordering, you can taste-test actual gummy bears to help you make your decision.

On your way to Hong Kong, Tokyo or Sydney? Consider adding Singapore to your itinerary—even if it’s just for the cinema-tourism factor, trending thanks to Crazy Rich Asians. This island-city-state is unique for its melting-pot culture and Modern Singaporean cuisine. Bonus: Six bars made the 2017 World’s 50 Best Bars list. –Doug Wallace

If B.C. towns planted along the Pacific Ocean were characters from The Brady Bunch, Ucluelet might be Jan. She’s long been overlooked for sister city Tofino 35 minutes down the road, but that could be changing. Less busy but blessed with similar good looks, Ucluelet has her own surf spots nearby (Florencia Bay, Wickaninnish Beach) and picture-postcard trails. –Joy Pecknold

Stay: Hotel Sighișoara, which housed nobility for centuries, is now a comfortable inn where no two rooms are the same.

You’d think that the birthplace of Count Dracula (or at least Vlad the Impaler, the man he’s thought to be based on) would be full of creepy alleyways and dark corners. Instead, Sighișoara is colourful and utterly charming. Not much has changed since the 1100s, when the Saxons built Sighișoara Citadel. –Emma Yardley