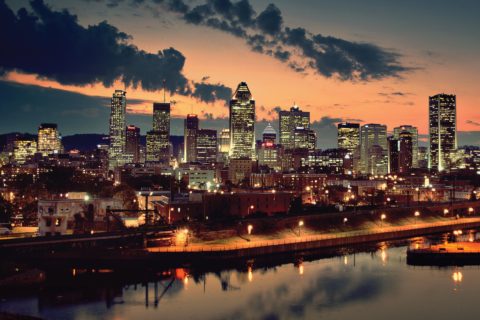 Just in Case You Forgot How Great Montreal Is

There's a reason why Montreal will earn approximately 4.3 billion in tourism dollars this year

When you really like a city, half of the joy in returning to it is finding your haunts exactly as you left them. While I was visiting Montreal last year, at the tail end of its 375th-anniversary celebrations, it dawned on me that over the years, all I’ve done is retrace my footsteps in this town. This time, as I wander the streets of Griffintown, on the banks of the Lachine Canal, I find an environment with little room for nostalgia. This part of Montreal is in the thick of a construction, retail and restaurant renaissance, and it feels different.

Over drinks at the Lord William Pub on Des Seigneurs Street, René, my veteran city guide, says he’s never been busier and wonders aloud if the “Trudeau Effect” is at play here. “I have many people asking for tours of Justin’s hometown,” he tells me, referring to the country’s telegenic prime minister.

It’s an interesting theory but one that I’m sure has been helped by the nearly $1 billion reportedly spent on Montreal’s 375th-anniversary celebrations. The city’s estimated spend was roughly double what the federal government spent on Canada’s 150th anniversary, and Tourisme Montréal predicts that Montreal will earn approximately 4.3 billion in tourism dollars this year, which it is attributing to the projected 6.1 per cent increase in tourists visiting from overseas.

Before walking into Le Richmond, one of Griffintown’s “supper club” destinations, I see plenty of construction cranes and storefront condominium showrooms. Inside the restaurant—a converted theatre space—I enjoy a rustic Northern Italian appetizer of grilled octopus on a bed of borlotti beans that is so flavourful, the insides of my mouth almost hurt. I savour the natural light pouring in from the floor-to-ceiling windows. But judging from the scaffolding across the street, a new build might soon obscure that gleam.

Griffintown is bordered by Notre-Dame Street West to the northwest and the once mighty Lachine Canal to the southeast. Throughout the 19th century, Griffintown saw waves of Irish immigrants who worked on the canal, the Victoria Bridge and the Grand Trunk Railway lines and eventually in the factories that overtook the neighbourhood. Then, when the nearby St. Lawrence Seaway opened in 1959, the area de-industrialized quickly, forcing residents to find work elsewhere, until Griffintown became practically a ghost town in the 1970s.

Today, the canal is managed by Parks Canada and is a picturesque route for pleasure boaters on the water and pedestrians and cyclists on the 13.5-kilometre path between the borough of Lachine and Montreal’s Old Port. (Griffintown is closer to the Old Port.) These days, the factories have been replaced by townhouse communities, interior-design stores and coffee shops, while the École de technologie supérieure (ÉTS) adds a welcome student vibe to the area.

Can you recognize them ? How many artworks can you see and who are the artists ? ?‍♀️?‍♂️ _ #riddle #contemporaryart #installationview #exhibitionview #arsenalartmtl #artlover #artoftheday

One of the more impressive conversions in Griffintown is the massive Arsenal Art Contemporain. The contemporary gallery (with satellites in New York and Toronto) is located in a 7,400-square-metre former shipyard. This imposing symbol of Griffintown’s aquatic past is also a hub for the city’s wild, if not under-the-radar, C2 (Commerce + Creativity) conference, which brings creatives from more than 50 countries to town each year (May 23 to 25 this year) to talk opportunity, the future and disruption.

After a light meal at the family-friendly Meatball House on Notre-Dame West, it occurs to me that I haven’t had a Montreal bagel on this trip. It’s 10:30 p.m., and I’m ready to head back to my hotel, The Queen Elizabeth, but my guide commandeers a taxi and points us northwest toward Fairmount Bagel. The 24-hour bakery is located in the familiar Mile End, where I spent many lost weekends as a 20-something escaping a dead-end job in Ottawa.

Within minutes of my arrival, my arms are laden with dozens of fresh bagels bound for my train ride home. They’re piping hot, so I leave the bags open to allow steam to escape. I’m still full from dinner but can’t resist eating one right out of the bag. The bagel is delicious and, in this instant, tastes exactly like the ones I remember.