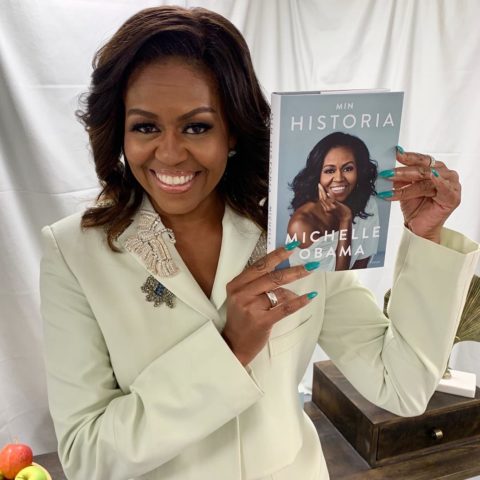 The former FLOTUS laughed, cracked jokes, and shared her wisdom with the group of 15,000 at Scotiabank Arena.

There’s a lot one can learn about Michelle Obama over the course of reading her 400-page memoir, Becoming. In the book, the former First Lady of the United States details all the experiences, challenges and events of her life, right from a childhood on the South Side of Chicago to eight years in the White House, but there’s still—and will always be—so much more to know. Over the weekend at the Toronto stop of her book tour, we learned some fun facts about the global icon. Like:

If she could meet any famous historical figure, who would it be? Eleanor Roosevelt. If she could replace the national anthem with one song from Lemonade, which would she pick? Formation. What can men do to be better allies? Bow down. (That one was a joke.)

Read on for the five best moments from the evening, and the stories and wisdom she shared over the course of her conversation with 2 Dope Queens’ Phoebe Robinson.

On raising strong daughters
“Here’s what I’ll say about my brother that should be relevant to men in the audience as it pertains to building a strong girl. My brother Craig and my father were the first examples of how men should show up in my life… They loved me unconditionally but not in that sort of pretty, girly, cutesy kind of way. I wasn’t just a precious little thing that wore dresses and was cute. My brother and father saw me as an equal. So when our father taught us anything, he taught it to us both. When it was time for Craig to learn how to box, I got my little boxing glove. When it was time to throw and learn how to catch, somebody was throwing and somebody was catching. And I learned what it felt like to be respected by men in my life and that shaped completely the kind of men I let in. To the fathers out there: trust me, girls know when you really value and respect them. Adoration alone isn’t always enough.”

Happy birthday to my big brother, Craig, who’s always been by my side whenever I’ve needed him. But what I love about Craig is he isn’t just that way around me. He’s always there for my mom, for his wife, and especially for his children. No matter what he’s got going on, he’s always making sure those around him know they’re loved. So today, I want him to know he is, too. Have a great day, @craigmalrob!

On the fear of failure
“When I talk to young people about that, I remind people that transition is something that you have to practice and oftentimes people let their fear keep them from practicing transition. For me, when I decided to go to a magnet high school and not my neighbourhood school, you go through that first phase of ‘oh my god this is so frightening…’ You do it, you push through that fear. By October it feels more natural, by January it’s old hat and before you know it you’re finished with your first year in high school. It’s over. It’s like a wave of fear that you have to get used to riding. If you stop you never get used to the fact that you’re going to get over that wave of fear. And a lot of people never practice getting over that wave of fear. They let that fear stop them because they’re afraid it’ll never end. The feeling of failure ends just like any painful thing. You recover from it. It doesn’t last forever in the same way.”

On her and Barack Obama’s Netflix deal
“We have such a limited array of stories that we hear about in the world because the storytellers tend to be white, male, older people who tell the stories that relate to them. So it is so important to have different voices determining whose stories get told. Because I understood in writing this book, for example, that it wasn’t important for me to tell this story just because I was the former First Lady but when you think about how many living black women get to tell their story en masse in a way that will be read by millions. Oftentimes our stories are told by others, and when someone takes your story and tries to retell it sometimes it loses its realness, it loses its power. So this platform isn’t really about me and Barack, it’s about giving as many other people the space and the platform to tell more stories so that our kids have different views of how to be human in this world.”

The projects the Obamas are working on for Netflix include a drama set in post-WWII New York City, a scripted anthology, a children's series, and a number of non-fiction projects https://t.co/ivz6DDXi8M pic.twitter.com/bRJWJuWLsj

On creating a better world for women
“Particularly in the workplace, I want men to think about the fact that whatever their workplace is like for the women who are currently in it, that’s what’s going to be waiting for your little girl when it’s time for her to step in. So if you’re one of those men that’s not making room for women’s voices, if you sort of overtalk a woman—I mean these are just small things, I’m not even talking about the crazy harassment stuff that can really go on, I’m just talking about the basic considerations or understanding what it means to value the voice of a woman. Because if you’re not doing that day to day in your workplace, that’s where your daughter’s going to be. And if you taught her to be strong but you’re then not preparing the workplace for the strong woman you’re creating, you’re doing a disservice to her.”

‪Happy #FathersDay @BarackObama. Our daughters may be older and taller now, but they’ll always be your little girls. We love you.‬

As I reflect on the past year, I’m so thankful and overwhelmed by all the new experiences and memories. From launching new endeavors and engaging new voters to sharing my story with all of you—and hearing about so many of yours as well. Thank you all for joining me on this journey and for sharing so much of yourselves. There’s so much to discover in 2019! #IAmBecoming #top9