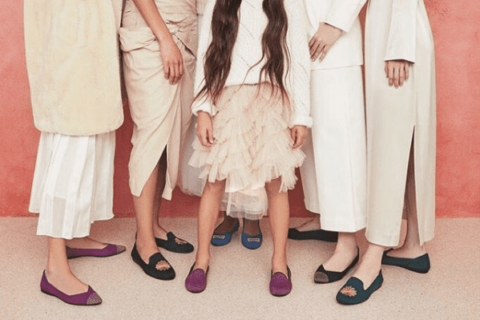 A couple of months ago, when the Duke and Duchess of Sussex were on their tour of Australia, Meghan Markle stepped out for an official engagement on the beach, swapping out her pumps for a pair of flats. In a matter of hours, those shoes—a sleek, pointy-toe pair of ballet flats—had been written about in just about every fashion magazine in existence (including ours).

Rothy’s, the brand behind the shoes, is a San Francisco-based startup just three years old. In this short span of time, they’ve amassed an Instagram following of 161K; a celebrity fan base that includes Markle, Lupita Nyong’o and Yara Shahidi; a legion of loyal customers; and $35 million in funding from Goldman Sachs.

So what makes these shoes so popular? For one, they’re apparently so comfortable that women can’t seem to get enough. One Instagram user recently commented, “Best shoes ever I have ordered 3 pairs in the last 4 weeks, I may have a problem….” while another wrote on a post about a newly launched style: “I would ♥️ these in a point! But for now I will just settle for the other 8 pairs I got!” Rothy’s produces their footwear out of recycled plastic bottles, which go through a few industrial processes before they’re woven into a soft knit material, ultimately fashioned into a range of styles from classic ballet flats to leopard print loafers to neon sneakers. The brand has, to date, officially repurposed over 20 million plastic bottles to create its shoes.

We’ve officially repurposed 20 million water bottles, and we couldn’t have done it without you! Cheers to the next 20 million.⁣ ? -⁣ In addition to wearing stylish and sustainable shoes – what are other ways you reduce your plastic footprint? Use #rothys20million to show us! First 10 people to do so get a special something from us. ?

The fact that women are buying multiple pairs of Rothy’s helps explain why the brand is likely to earn over $100 million in revenue this year. According to Bloomberg Businessweek, “In terms of U.S. sales, Rothy’s has quickly eclipsed Tod’s ($88 million in North America last year), and now measures about a third of the size of the Crocs empire of plastic clogs ($389 million last year).”

While the comfort and sustainability ethos are clearly the driving force behind the young brand’s success, a push from the Meghan Markle corner doesn’t hurt either. In a Business of Fashion piece on “Monetizing Meghan Markle,” the writer takes a closer look at how brands worn by the Duchess have seen sales multiply after their moment in the royal spotlight. “Rothy’s shared a single picture on its Instagram feed and received almost 20,000 likes — nearly 20 times more than usual… Sales of the style, the brand’s best seller, rose three times that week, while the black round-toe flat doubled, according to Kerry Cooper, president and chief operating officer.”

Social media has played a huge role in the brand’s success story, something frequently highlighted in articles written about the startup. “We tried the washable flats you’re seeing all over Pinterest,” reads a Buzzfeed headline. WIRED refers to it as “a colourful line of shoes that pop up constantly on Instagram and Pinterest.” The Bloomberg Businessweek headline, too, underscores the brand’s social media cred, dubbing it in an “Instagram-popular shoemaker.” According to Bloomberg, the company’s first factory in China, which opened in January 2017 with just nine employees, has now swelled to 450 workers and 160 machines knitting shoes 22 hours a day. The frantic pace is necessary, the brand’s founder Roth Martin says, to keep up with the demand, especially given the spike in interest since Markle was photographed in their shoes two months ago. Given his plans to launch more styles soon—and possibly even apparel and accessories—we can expect to see plenty more of Rothy’s in our feeds in the months ahead.