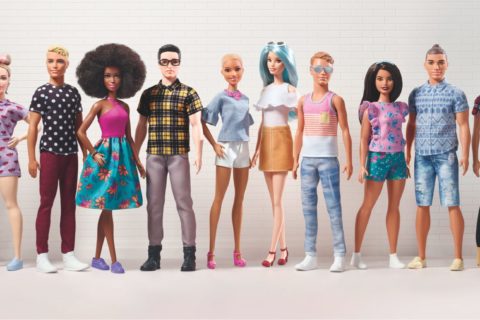 These days, it seems like companies are falling over themselves to appear as inclusive as possible. Most recently, Mattel not only added a male doll to its American Girl collection but also included cars based on characters like Wonder Woman, Harley Quinn, Batgirl and Supergirl in their Hot Wheels set, keeping the packaging gender-neutral.

Now, the Barbie brand has expanded its Fashionistas line to include a whopping 15 new and “diverse” Ken dolls, called “The New Crew.” Of course, any attempt to reflect different skin tones and body shapes should be applauded, but in Barbie’s case, a full-on standing O isn’t necessary. And maybe just keep that applause to polite golf claps.

First of all, most of the new dolls are racially ambiguous, except for African American Ken. Were any dolls modelled after Asian or Latino men? Maybe, but definitely not to an identifiable level. The rest of the figures seem vaguely biracial. So yes, different races are finally taking centre stage in Barbie’s world, but even with as many as 15 new Kens coming out of the wood work, it appears some were still left out.

Secondly, it’s obvious that real body types weren’t really taken into consideration. In 2016, Barbie introduced three new shapes for the female dolls – tall, curvy and petite. The body types available for the new and improved Ken? Slim, broad and original. This means short guys were left completely out of the equation. Oh, and unless you pull out Seamstress Barbie’s itty-bitty measuring tape, you’re likely to miss that “broad” Ken is supposed to qualify as the male version of curvy.

Lastly – and possibly most importantly – it seems that someone at Barbie made the head-scratching decision to include Man Bun Ken in the lineup. That’s right. The most annoying trend (and the real reason you dumped your ex) was deemed important enough to be incorporated in the nine new hairstyles that include cornrows, a buzz cut and the guy version of DJ Tanner bangs. Not even Hair Stylist Barbie can save us now.

We can’t hate on a brand that is working to aim a spotlight away from its blond, blue-eyed mainstays. However, it’s still a hard pill to swallow when they’re rushing to pat themselves on the back for a job well done, despite still having a press release that only mentions how these new changes will affect their young female customers. Because boys don’t play with Barbies, right?