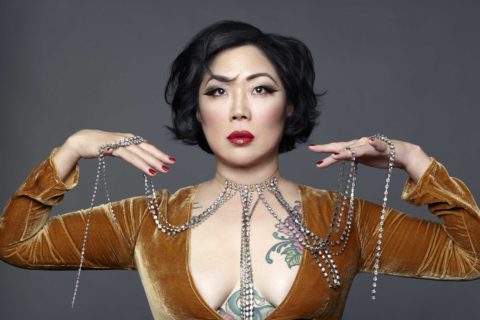 The fierce, fantastically funny Margaret Cho is roaring into Canada with her latest comedy special, Fresh Off the Bloat. Crushing it for three decades now, she pioneered the first Asian-American sitcom back in the nineties, did her own fashion line, toured in a burlesque troupe, and has written several books. Now on her tenth special, Cho is just as scathing and hilarious as ever. We spoke to the comedy icon and activist about diversity, Asian representation in Hollywood, and smashing the patriarchy—plus her penchant for streetwear.

Margaret Cho will be at the JFL42 comedy festival in Toronto Sept. 21 and 22, performing her new special and sitting down for a Q&A.

What challenged you most about writing your new Fresh off the Bloat material?

When you’re doing material about substance abuse and suicide and rape, and things that are really very upsetting—and then to have to figure out where you can go with that, in a comedy context—it’s pretty difficult. But, at the same time, it’s incredibly rewarding when you can figure that out.

What do you really love about standup and comedy? Why did you choose to make this your life’s work?

I love it because it is alive. The way you take it and you put it out there—you never know what’s gonna happen. And that’s one of the great joys there is, that it can go any way. You always take a chance. It’s about convincing people to understand things your way, and being able to articulate things in the right way.

How has your comedy style evolved over the decades?

Well, I think I’ve grown up. I started really young. I’ve gotten much [better at] courting controversy, yet I do things with a lot more grace, which I think is very exciting. I like to think of myself as a class act! So, I like that. And I really want to continue in that vein.

In previous specials, you discussed the racism and fat-shaming you experienced while working on your groundbreaking sitcom, All-American Girl, and eye-rolling tropes like the plump Asian best friend. Do you feel like representation of Asian folks in the arts have improved over the past 20 years—or not?

It’s gotten a lot better. There’s a couple of other really exciting comedians that I love, like Ali Wong and Awkwafina, out there. At one time it was like, “where are the women?” I was really left hungering for more Asian-American women, and now we have more, so that’s great—but there still needs to be more. We haven’t gotten all the way there. There’s only really one Asian-American TV show [Fresh Off the Boat], for example.

As audiences, how can we help improve representation?

Social media movements—like the ones against whitewashing—really help studios to understand what’s acceptable. Or, looking at the popularity of Black Panther, that’s a major thing that was fan-built. They create this huge fandom that’s undeniable. So, it’s really about supporting the work and the artists: that helps create the multicultural landscape.

You’re famed for discussing taboo topics, from describing your tryst with Ozzy Osbourne to recounting how you had to deal with your abuser being invited to an event honouring you. Outspoken women are often castigated in our society, especially via social media, for speaking out about things like sexuality and abuse. Do you get blowback about this material, especially in this age of social media? And if so, how do you deal with it?

Trolling is so 2013. Also, being upset by trolls is very passé! You just roll with it. If you’re a woman, you’re talking about these issues that are very volatile. People talk about “has #MeToo gone too far?” Like, what do you mean? How can truth go too far? How can a woman standing up for herself go too far? That, to me, is a very strange kind of logic. I don’t think we can go too far when it comes to our experience.

Speaking about your sexuality is a big part of your standup. Do you see it as a political act?

It’s very political. And it’s really fun! It’s one of those places where there’s a lot of artistry there. When I was really coming into my sexuality, it was right after AIDS. It was pertinent to get into sexual activity that was outside of fluid-bonding, so there was all this different stuff happening: being very creative with sexuality, whether it was BDSM or latex fetishism. And I love that 90s, sex-positive, queer-pansexual freakiness. The ethical slut mentality: I think it’s really powerful. And it’s really encouraging. It encourages you to be creative. And I think that’s what I love to celebrate.

You often get labeled as fearless, which is a wonderful thing to be called, but it’s also interesting, because it’s often a word applied more to women in the entertainment industry, rather than the men. Does it come off as patronizing? Or do you embrace it as a really high compliment?

It’s a really high compliment. I also think it’s a sad statement on the way that we view women with opinions—that women with opinions should be afraid. That’s what it denotes. When we can counter those female tropes and idealized visions of femininity? It’s great to be outside of that norm.

What advice would you give other women who want to become comedians?

Be prepared for every type of experience. And don’t judge the whole of your career on any one show. Because you can go from being applauded and getting standing ovations to almost being burned at the stake in the same night. There’s no one experience as a comedian that can define you in your career, because the variance of audience reactions are so vast that there’s no way to judge if you’re good or not. There’s no way to judge if you’re bad or not. Just keep going, because women ignite such a huge passion—either positive or negative—so just don’t judge yourself by it. Don’t take any of it personally

You also talk a lot about your body image and previous experience with eating disorders in your specials. How has your relationship with your body changed over the years?

A lot of that, for me, is hormonal. Now that I’m the age that I am, I’m kind of past it a little bit in terms of trying to create a body that is pleasing to the male gaze—or pleasing to the female gaze, really. The female gaze is far more restrictive, and insulting in a lot of ways. Women are really awful to each other when it comes to body image and what the body should look like. I just don’t have the energy or the time to focus on that kind of stuff, where it’s causing so much pain and trouble in my life. I don’t know. I just drink water.

You’re a big fashion fan. How do you plan your tour outfits?

Sometimes I think, “oh, I’m going to do this and this and this and this,” and then I’ll get into a Vivienne Westwood kind of thing—but then I realize, “oh, it’s too much to maintain all of that.” I mean, I love fashion, but now my passion is for the giant, ugly Balenciaga sneakers. Like, those power-walking-through-the-mall, ugly, ugly shoes.

I’m very into streetwear and being very comfortable, which I get from Janeane Garofalo. She was such an early adopter of sportswear. We all sprung from Janeane Garofalo. I love artistry, I love Insta-designers: people who put their clothes out on Instagram and then you buy them, I love that. I love all of the new social media fashion. That’s been very exciting.

Tay Trong. He’s a genius; he puts together a lot of very different kinds of garments and then it makes a Frankenstein! So I have quite a few of his designs. It’s so imaginative.