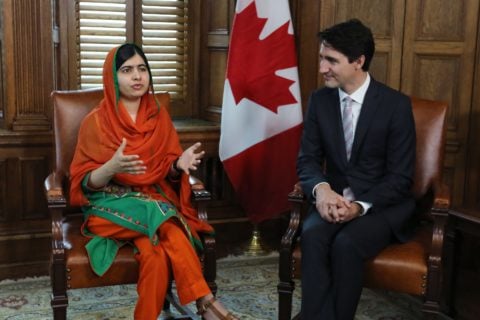 “I'm humbled to accept honorary citizenship of your country..."

The youngest-ever Nobel Prize laureate and activist for female education can now add honorary Canadian citizen to her list. And she’s already using her new status to fight for girls.

Malala Yousafzai, the Pakistani woman who survived a Taliban attack in 2012, delivered a powerful speech at the Canadian Parliament Wednesday in Ottawa. In it, she called on Canada’s leaders to broaden educational opportunities for girls.

“I know where I stand,” Yousafzai said during her inspirational speech. “If you stand with me, I ask you to seize every opportunity for girls’ education over the next year.”

At the meeting, she asked Canada to take initiative for its upcoming presidency of the G7 to make sure more girls get to go to school.

“Use your influence to help fill the global education funding gap. You raised billions of dollars and saved lives when you hosted the Global Fund replenishment in Montreal last year. Show the same leadership for education,” she said.

At 14 years old, the activist took a bullet to the head and neck after speaking out about her passion for education and her pursuits to become a doctor, the ultimate defiance to the Taliban.

Her strength and bravery struck a chord with Canada.

At only 19, Yousafzai became the youngest and sixth person to receive the honorary Canadian citizen title.

“I’m humbled to accept honorary citizenship of your country. While I will always be a proud Pashtun and a proud citizen of Pakistan, I’m grateful to be an honorary member of your nation of heroes,” Yousafzai said.

Laughing, she added, “Though I still require a visa, but that’s another discussion.”

Yousafzai was meant to receive her honorary citizenship in October 2014, but a violent gunman attack on Parliament Hill set the date back. In her speech, the 19-year-old condemned acts of terror like this one perpetrated in the name of Islam.

“I am a Muslim and I believe that when you pick up a gun in the name of Islam and kill innocent people, you are not a Muslim anymore.”

She spoke about the hatred of the people involved in the Quebec City mosque shooting in January as well as her own experiences. She said this hatred is the same hatred shown in the man who shot at her in 2012.

Amid the terror, she praised Canada for accepting refugees in their time of crisis.

“Your motto and your stand, welcome to Canada, is more than a headline or a hashtag,” she said.

“It is the spirit of humanity that every single one of us would yearn for if our family was in crisis. I pray that you continue to open your homes, your hearts, to the world’s most defenseless children and families and I hope your neighbours will follow your example.”

Yousafzai didn’t let the gathering get too serious, though. She also raved about the excitement back home for her meeting Prime Minister Justin Trudeau in person.

“He’s the second-youngest prime minister in Canadian history! He does yoga! He has tattoos!”