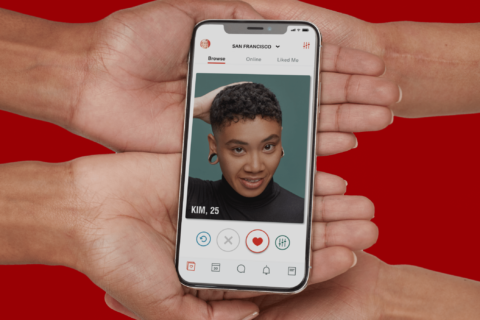 Photography via HER
Celebrity

Robyn Exton, Founder of LGBTQ+ Dating App HER, On the Importance of Building Womxn-Specific Platforms

"What we realized is that it's not really about LGBTQ people not having their own platform but about women not having a platform that had truly been built for them."

Toronto-born Robyn Exton is the woman behind HER, the world’s first and largest community of queer women. In just three years, the platform’s app (available on iOS and Android) has amassed a global network of over 3 million individuals across 55 countries. It was six years ago, sitting at a pub in London and consoling a friend who had just split up with her girlfriend, that the idea for HER was born. Tired of making do with “really poor versions of websites built for gay men that they just modified and made pink,” Exton began wondering why there weren’t more platforms for queer women to meet and interact. “At the time, there were about 25 apps for gay men, and so many for straight people. Match.com had an app, eHarmony had an app… So I was like, this is ridiculous. Why has no one ever built anything properly for women?”

She quickly began doing research, learned to code, and immersed herself in the tech community in London (where she grew up before moving to San Francisco when HER launched three years ago). “It all kind of snowballed from there.” This Pride Month, we caught up with Exton to chat about the app and how it’s evolved over the years.

What sort of goals did you go into the launch with?

Something that I was aware of really quickly was that my experience of dating was very different to a 50-year-old lesbian in Manchester, and that was very different to an 18-year-old person who was questioning their sexuality and wasn’t sure who they were and what they wanted, and that was very different to someone living in the middle of the countryside. All of these people have very different needs and so one of the early jobs I did was to try and speak to as big a spread of people as possible to understand the common issues and problems that everyone experiences. We initially designed and launched HER for iPhone, given the fact that research showed a large user base using iOS. Creating our iPhone app first gave us the grounding we needed to connect with HER users and make an impact with our reach.

What are some of the different ways in which gay men and gay women date and interact that made you feel like there needs to be female-specific website or app?

What’s interesting is that we’ve all generally grown up in a world that sees gender as a binary element. There are set behaviours that we’re taught as men and as women to adhere to and follow, and particularly in the realm of dating, that gets exaggerated even more. When you have a product that is for straight people, you are balancing those two behaviours to match together. But when you run a platform that’s for LGBTQ people, generally you’re focusing on one of those specific behaviours that’s mirrored on both sides. What Grindr did brilliantly was understand what is that thing that both guys are looking for, and optimize for that, and what we’re able to do with HER is look at what women are looking for, and optimize for that. We actually did a story with Grindr to compare how people use Grindr vs how they use HER. Some of the big differences we see are in messaging. For guys on Grindr, the average length of interaction is something around three messages or something like that.

And I think I read that on HER it’s somewhere around 40.

Exactly, and the average time to meet up on a male platform is typically around a couple of hours, while on female platforms it’s around seven days. So it’s just completely different kinds of experiences. And it makes sense, because women have grown up thinking about personal safety, or what they’re going to talk about when they meet this new person… As we started unpacking all of this, what we realized is that it’s not really about LGBTQ people not having their own platform but about women not having a platform that had truly been built for them.

Conversations around gender identity have changed so much in the past few years, and people have become more comfortable with broader identifiers like pansexual and non-binary. How do you make sure that your app continues to evolve and grow with the times?

We looked at some research from two or three years ago that found that fewer than 60% of people under the age of 22 identify as exclusively straight, which means that people who are not straight are now coming into the majority and that is mind-blowing for us. And then what we found from our own user base is that the age of 29 seems to be an interesting breakpoint in how people identify. Over the age of 29, there are increasing numbers of people identifying as lesbians but under the age of 29, there was a 137% greater chance that you will identify as pansexual and 140% greater chance that you’ll identify as non-binary. Everything is changing in our community and in our audience at the moment and it’s really important for us as a company to reflect that and make it clear that we’re a place where you can explore. In terms of identifying inside the product, I think we have 18 sexualities and 23 different gender identities, and our principle with it is: however people want to identify, they can submit to us that that is what they want to express on their profile and we will add it within 10 days to make it available in the app.

We’ve now reached that point in the digital age where people are shying away from putting too much of themselves on social media. How does that affect apps like yours?

It’s interesting. Again, it varies a lot by age group. We find that people under 25 are pretty flexible and open about their data and where it’s been. I think people over that have been part of a group that was told to be more protective of our data and think about where it goes and what happens. But we’re a pretty isolated ecosystem. Because of the nature of our community, we’ve always been quite cautious about that, we don’t want to out anyone without their being out in their own world, so we’ve always had our own strong internal system. I think that at the time that the world is in now with GDPR and the Facebook breach, it’s really just about each company taking responsibility with how they’re handling their users’ data.

In what ways have queer dating apps contributed to the slow decline of things like lesbian bars, and conversely, in what ways can they be used as tools to promote more IRL interaction?

I think there’s multiple things at play here. Rents are going up a lot and that’s putting a lot of pressure on LGBTQ venues. I think that as there becomes greater acceptance of queer people, the reliance on venues isn’t as high as it used to be. However, I have a very strong personal belief that the importance is just as great as it ever was, and it’s just as valuable to have these dedicated physical spaces. It’s actually why we built an Events feature. We knew that there were tons of great events run by powerful, inspiring, great queer women who are putting huge amounts of effort to make something of value to the community. Part of the problem is that it’s really difficult to find those events. We wanted to make it easier to discover them for our community specifically. If we don’t have as many physical spaces, we want to try and play a part in creating more digital spaces so you can still find other people like yourself and be able to connect with them.

What sort of events do you do?

A big part of what we do is relevant to the city that it’s in. For example in Australia we run camping trips, in London we’ve done queer burlesque shows, in LA we do an arts and crafts fair experience. In Canada, Toronto and Montreal are our two big markets. What we’re actually doing this month in Canada for Pride is great. There’s this lesbian festival in Barcelona called Girlie Circus—it’s Europe’s biggest lesbian festival, known for electro and house music played by queer and female DJs—so we’re bringing a bunch of the performers and DJs from there over to Canada for two events in a row, on June 15 in Toronto and June 16 in Montreal.

In what ways is HER different from other dating apps out there?

Our strongest differentiator is our Communities feature. We have communities inside the app, and sub-communities, relating either to identity or your passions and interests. You can join those communities, share content, ask questions and get answers from people that care about the same kind of things. From a user perspective, if you were to join HER, the difference is it feels super, super gay. And that is not something that many other places feel like. It feels like your LGBTQ home, a brand and a voice of people that understand who you are, what you might be going through, and connect you with other people like yourself. That’s all we want, for people to feel like this is a home they can come back to.

Photography via HER
Get the best of FASHION in your inbox Thanks for signing up!
The latest fashion, beauty and celeb news delivered right to your email #FASHIONforall Now, check your inbox to complete your subscription
We won’t ever use your email address for anything else
Want even more FASHION? Follow us on social media.