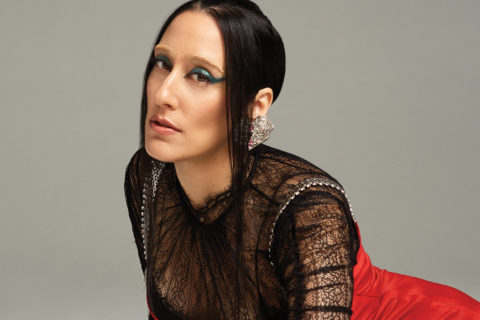 Ladyfag Brought Inclusivity From the Club Scene to Mainstream

Dressing up is a 24/7 pursuit for this rebellious nightlife maven.

It might be hard to find a single place in the world where Ladyfag dresses down. Not when she’s alone at home, lounging in a bias-cut 1930s slip. Not when she pops out to the deli near her New York City apartment. And not even when she’s dashing from our FASHION cover shoot to catch a red-eye to London. Leaving the sweats to others (they’re the one trend she says she won’t wear), she prefers to sweep on board in a Burberry coat and sky-high heels.

“Airports are glamorous,” says the nightlife icon as she picks at a fruit danish post-shoot. “Everyone is going places and doing things. So why not? You’re going to take off your shoes anyway, when you get on the plane, so you might as well kick off heels instead of sneakers.”

For someone who grew up as Rayne Baron in Thornhill, an affluent but conservative suburb of Toronto, Ladyfag’s penchant for theatrics comes as a bit of a surprise—even to her. “It’s funny because when I was younger, I was definitely shyer than I am now,” she says. “I was observing rather than doing, and I don’t know fully when that changed.”

It could have been when she moved to Toronto’s eclectic Kensington Market at 18 that she began coming into her own. She started selling vintage clothes, which ignited her love for fashion, and eventually discovered nightclubs and performance art. It was for a performance piece at a Toronto art gallery that she adopted the name “Ladyfag,” a campy reference to being a flamboyant woman in a world of gay men.

A spontaneous visit to New York 15 years ago opened the doors to a career she’d never anticipated. “I didn’t go there with any agenda,” she says. But she began attending parties in the city’s nightclubs, where she caught the eye of legendary promoter Kenny Kenny. From there, “it snowballed,” and soon she was throwing outrageous parties of her own. Her events earned her the title of “nightlife sorceress” from The New York Times and have been attended by the likes of Riccardo Tisci, Alexander Wang, Padma Lakshmi and former Club Kid Amanda Lepore. Long before it became the buzzword of the moment, the term “inclusive” would come up, time and again, in the media coverage of her parties.

“When you’ve grown up in that world of nightlife and queer culture…we’ve always been the underdogs and the freaks and the crazies, but now we’re suddenly becoming a trend. It’s kind of funny, but it’s positive, really, because inclusivity is good. People are changing their ideas of what is beautiful; they’re finally catching up.”

“When you’ve grown up in that world of nightlife and queer culture…we’ve always been the underdogs and the freaks and the crazies, but now we’re suddenly becoming a trend,” she says. “It’s kind of funny, but it’s positive, really, because inclusivity is good. People are changing their ideas of what is beautiful; they’re finally catching up.”

With her extravagant makeup and double take-worthy outfits—a mix of vintage and designers like Tisci, Marc Jacobs, Junya Watanabe and John Galliano—it might be easy to look at Ladyfag’s larger-than-life brand and wonder about the line between the person and the persona: How much is her, and how much is an act?

“There’s me as a person, but then there’s Ladyfag, who’s a brand, a personality,” she says. “Nightlife is a fantasy, and that’s part of what I’m selling. So I have to always be on—I have to have my game face on. As a friend of mine who’s a drag queen used to say, ‘A lady always wears her lips.’”