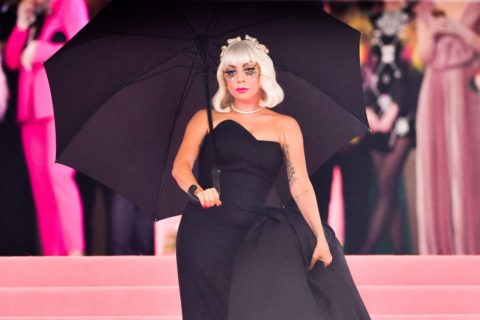 Lady Gaga is set to star in a new film about the Gucci family, Jennifer Aniston teased a potential new project with the Friends cast, and more...

Lady Gaga is set to star in a movie about the Gucci family
After The Assassination of Gianni Versace: American Crime Story, Hollywood is turning its lens on another fashion dynasty. This time, it’s the Gucci family, and they’re at the centre of an upcoming film starring Lady Gaga. The Oscar-winning actress is set to portray Patrizia Reggiani, the ex-wife of Guccio Gucci’s grandson Maurizio. The two split up in 1985 after 12 years of marriage when Maurizio left his wife for a younger woman. 10 years later, he was gunned down and Reggiani was convicted of orchestrating the assassination. According to Variety, “she gained the nickname the Black Widow during the trial and served 18 years before being released from prison in 2016.” The upcoming film will be directed by Ridley Scott and is based on the book The House of Gucci: A Sensational Story of Murder, Madness, Glamour, and Greed.

Fresh off her lead breakout in Bradley Cooper's #AStarIsBorn, @ladygaga is teaming up with Ridley Scott for her next film project https://t.co/p35wGxQBOH

Jennifer Aniston hints at a project with her Friends co-stars
Fans have been demanding a Friends reboot for years now, but the show’s cast has steadfastly claimed that they have no plans to resurrect the beloved sitcom. In an interview with Ellen DeGeneres earlier this week though, Jennifer Aniston said the six might be working together on something else entirely. “Listen, we would love for there to be something, but we don’t know what that something is. So, we’re just trying. We’re working on something,” she said. She then added that she didn’t want to “lead people on” so maybe don’t get your hopes up just yet.

Margaret Atwood documentary to premiere on CBC this month
Margaret Atwood is the subject of a new documentary, which hits screens on the cusp of her 80th birthday later this month. Titled Margaret Atwood Encounters, the film will premiere on CBC Docs POV on November 14, and will also be available via the free CBC Gem streaming service from November 19. The documentary features the author’s poetry and prose as read by actress Tatiana Maslany, and includes interviews with Atwood herself as well as Elisabeth Moss, Sarah Polley and Atwood’s late husband Graeme Gibson.

A new @MargaretAtwood documentary is coming to @CBC and #CBCGem! https://t.co/89NAjaXQXY

Facebook and Instagram are banning “suggestive” use of emojis
According to Facebook and Instagram’s newly updated Community Standards guidelines, users are prohibited from pairing “[commonly used] sexual emojis or emoji strings” (such as the eggplant, peach and water drips emojis) with sexual statements. “[Content] will only be removed from Facebook and Instagram if it contains a sexual emoji alongside an implicit or indirect ask for nude imagery, sex or sexual partners, or sex chat conversations,” Instagram tells The New York Post. As Complex reports, “Doing so is now considered “sexual solicitation” and can be grounds for an account to be flagged or removed.”

Your account can now be removed for using an emoji such as the eggplant or peach with sexual statements: https://t.co/SmrAb4KQvA pic.twitter.com/AM7twFY8cC

And ICYMI, Hollywood’s biggest names went all out for Halloween this year.